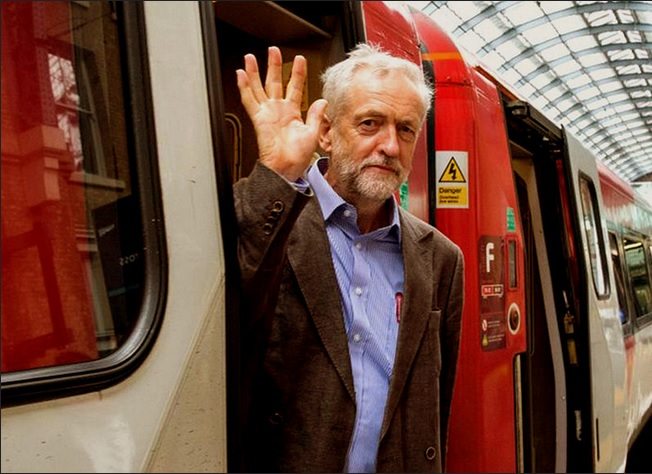 A quick scan of social media and mainstream news sources since the election of Jeremy Corbyn as Labour leader should alert you to the fact that the war against the values for which he stands has already begun. The permanent political class are freaking out over Corbyn’s win because his election and the movement behind him is the greatest threat to their grip on power in modern history.

The first to freak out were the Labour establishment. Their reaction was best captured by the purge, scaremongering and refusal to work with a Corbyn front bench.

The reason Labour had a new leadership election process this time round, was the result of long term efforts by the parliamentary Labour Party and the NEC to diminish the power of Trade Unions. The Blairite factions of the party gambled that Labour voters would be to the political right of the Trade Unions, and by widening the leadership election to that group hoped to quiet the voice of unions. But they got a shock. It turned out that many of the new voters were actually well to the left, and ready to take a chance on a democratic socialist like Corbyn. So, the Party responded to those new supporters as ‘infiltrators’.

This was a bizarre move, because if Labour don’t win back these voters, they are sunk in 2020. Labour need to win an extra 106 seats next election to gain a majority, an almost impossible task. But that almost impossible task becomes totally impossible without a mass, popular movement to reengage the public. Just 24% of people voted Conservative in the last election, 76% didn’t. The largest gains went to socially democratic populists the SNP, who killed Labour in Scotland. The biggest losers were the Liberal Democrats, the only ‘centrist’ party in town.

So why would the Parliamentary Labour Party NOT want to harness the power of a populist, social democratic movement? Especially when it is the only chance they have of regaining office in 2020.

It is becoming ever more clear that the Labour Party in Westminster has become a part of a permanent political class alongside their Tory and Liberal Democrat counterparts. Disengagement and voter apathy means a fairly stable job, a few seats lost and won either way each election and no big surprises. The chance to earn a great wage and pass policies which guarantee lucrative consultancy/director roles after politics. All done with the passive acceptance of a disaffected electorate, half of whom don’t even bother to vote anymore. To this permanent political class, a popular movement based on social democratic values is about as welcome as a fart in an elevator.

This is why Harriet Harman planned to cull over 100,000 so-called ‘infiltrators’ from the vote. This is why self-appointed voice-of-the-left Polly Toynbee, the Guardian editorial team, and most of the press (right and liberal) were busily character assassinating Corbyn and anyone who would give him their vote.

But despite all efforts, Corbyn won with a greater landslide in 2015, than Blair did in 1994. The ‘unelectable’ Corbyn galvanized a thumping majority against a hostile media, commentariat and even parliamentary party.

How did the conservative permanent political class respond? They freaked out. This freak out is best summed up by this near-hysterical tweet by Prime Minister David Cameron.

How did the public respond to the Corbyn win?

Over 40,000 people have joined the Labour Party since Jeremy Corbyn was elected leader. This is significant. Back in 2011, political party membership in the UK was at an all time low; just 0.8% of eligible adults in the UK were members of political parties, versus 3.8% in 1983. But while general membership was in decline, membership of ‘other’ parties was on a steep rise. This was a signpost that perhaps the problem was not the apathy of the public to politics, but the apathy of the political class to the aspirations and values of the public.

But since the No Vote in Scotland, the rise of the SNP and Greens north of the border, and the victory of Corbyn – large sections of the public are reengaging with the political system again in ways not witnessed for decades.

Furthermore, it appears that Jeremy Corbyn and his front bench plan to galvanize the power of this membership to bring democracy into policy making. In short, it looks like Labour members will be supporting policy development in a way unheard of by mainstream parties before now. This would remove the power of the front bench and parliamentary party to act against the will of the membership – it should also empower Corbyn’s team to turn their policies into reality.

In short, there is now a distinct possibility that a truly progressive, democratic socialist Labour Party could win in 2020. Not only that, but they could topple an unpopular Tory government even before then. An unconstrained Labour Party with Corbyn at its head, and John McDonnell as shadow Chancellor could deliver the sort of coordinated opposition to start landing big punches now.

The permanent political class is freaking out because the only thing that can beat out Project Fear, is Project Hope. A Tory-lite Labour opposition was never going to win in 2020, but an energetic and awakened Labour movement can. Even worse, if they do win, there is a very real chance that the domestic and foreign policy of Britain could change in a truly radical way. We could be a few years away from the most progressive government since Clement Attlee’s post-WWII government delivered the NHS, a national education system, nationalised transport and energy, and rolled out the biggest social housing programme in our history. This is the kind of genuine electoral choice that UK voters haven’t had for decades.

The permanent political class knows it is under very real threat. They are going to use every weapon in their armory to neutralise that threat. But none of those weapons is more powerful than a tight-knit, grass roots movement with its eye on shared vision of an inspiring future.