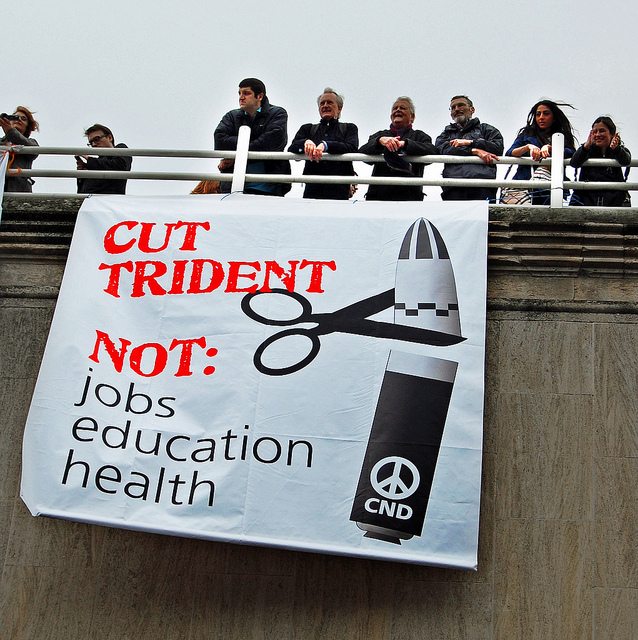 Since Jeremy Corbyn announced his leadership bid, hundreds of people have joined the Campaign for Nuclear Disarmament (CND). The rate of sign ups has increased from about 30 per month to over 200 per month, since Corbyn began his campaign. The trend shows no signs of letting up, with more than 100 new members in the past week.

This weekend, Corbyn is to speak at the CND’s annual conference in London. This is alongside Deputy Leader of the Green Party Amelia Womack and SNP Defence Spokesperson Kate Hudson. Given the recent appointment of an anti-nuclear Labour leader, and a Parliamentary vote on the renewal of ‘Trident’  early next year, this is a crucial conference.

Trident is the sea-based nuclear weapons system located on the River Clyde in Scotland. The CND estimates it will cost over £100bn over the course of its lifetime. The Ministry of Defence is still to update its figures, despite having released an annual report in December 2014. Their – still eye-watering – £15-20bn estimate is based on 2006-07 prices and does not include annual maintenance.

On the other hand, Daily Mail writer Peter Hitchens argues that the missiles are ‘useless’. He agrees with the CND that Trident is anachronistic and a sentimental throwback to when Britain was a global power. He further argues that Russia presents no military threat to us.

Hitchens is right on this issue: the weapons are useless. Corbyn came under fire for stating he would never launch nuclear weapons. The question is, can you think of a situation where you would? As Peter Sinclair tweeted:

Either you press the nuclear button first – which would be mad. Or you press it in retaliation – in which case it wasn’t a deterrent

Corbyn recently called for a vote and debate on the renewal of Trident within the Labour party, but the proposal was rejected.

The Deputy Labour Leader, Tom Watson, while maintaining a strong anti-austerity position, supports the renewal of trident. However, the two are linked. Trident is the appropriation of potentially £100bn of public funds towards weapons of mass murder, that could be used on essential public services. A report from the CND states:

We could employ 150,000 new nurses, build 1.5 million affordable homes or pay the tuition fees for 4 million students. 2 million jobs could be created, rather than the 7,000 currently sustained by spending £100 billion on nuclear weapons

Does this huge cost pay off internationally? The recent landmark nuclear deal with Iran was reached through diplomacy, not through ‘my submarine is bigger than yours’ posturing. Iran’s nuclear programs are now limited.

Trident is ineffective against the real security threats of our time. You cannot launch nuclear weapons at climate change, one might say it would exacerbate the situation. ‘Terrorism’ cannot be defeated by such weapons either.

A nuclear-free world is a good thing, fulfilling our obligations under the nuclear non-proliferation treaty and promoting a nuclear weapons convention is a good thing. They are all signed up to multilateral disarmament, by the way.