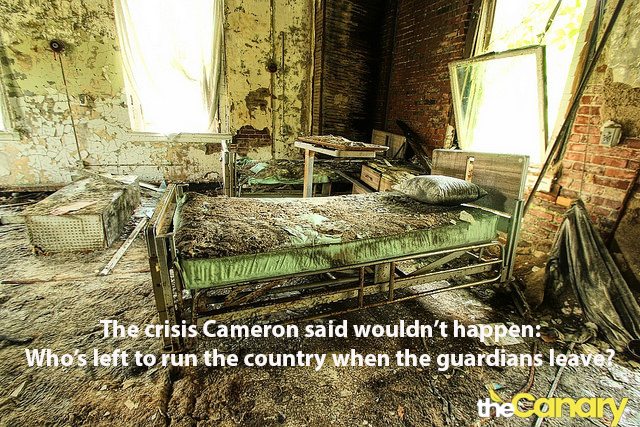 Prime Minister David Cameron promised that the NHS, and the rest of the public services, would be safe in his hands. But an unfolding crisis is underway for which he has no answer. Overworked and underpaid staff are leaving their posts in record numbers, and it’s just not clear who is going to run the country in their absence.

Public sector workers find themselves under unprecedented attack from the Conservative Government. Millions of workers have seen their terms and conditions torn up and their fellow workers laid off in droves as the government continues its austerity agenda. This is creating an exodus of public sector workers leaving their roles to escape the desperate situation. The crisis looks set to deepen, leaving the public at great risk.

Public services, built and paid for by us, our parents and our grandparents, have been decimated since the Coalition Government took office in 2010. Public servants that teach our children, tend for us in times of illness or who respond to our emergency calls, have watched as careers they love are turned on their heads by merciless cuts and the government budget for providing these vital services continues to be aggressively cut.

Since 2010, the Fire and Rescue Service has seen a loss of over 5,000 firefighters, the police have lost over 16,000 officers (with another 5-8,000 set to be cut from the Met) and the NHS finds itself on its knees after the loss of 5,000 nurses (and that number too is rising). Cuts of this scale pose a great risk to the safety and care of the public and of those guardians providing us 24/7 insurance whilst we sleep. The increasing strain and workloads on those few workers left is now forcing them to leave.

Some 50,000 teachers (1 in 12) have left their profession since 2014, forcing the government to look abroad to find teaching professionals to fill the void left as pupil numbers continue to rise. A damning indictment of the government’s attitude towards education. The Fire and Rescue Service is also seeing an unprecedented number of frontline firefighters either leave or be forced out of careers they love. Nurses have reached their limit and are starting to walk out for the final time, a report by Lord Carter on NHS productivity highlighting a 29% increase in the numbers leaving the profession.

Underpinning this exodus is a lack of appreciation and the stress of having their ability to do the job safely and efficiently hampered by cuts and poor organisational leadership.

Our public servants work nights, weekends, holidays, birthdays and anniversaries. All they had asked in return was the ability to do their jobs in physical and financial security. Following a lifetime of service, their reward was a pension that enabled them to plan for their family’s future. The government have taken this comfort blanket away from them too. They now find themselves working longer, paying more and getting less as the Conservative Government agenda of austerity continues to tighten the screw. This harsh reality they face has led to many taking the tough decision to leave for new pastures in pursuit of securing a better future for their families – something unheard of even a decade ago. Affordable housing, the creeping privatisation of the NHS – all serving to worry young providers into clocking off for the final time.

The exodus of long-serving and experienced public workers is creating an atmosphere ripe for privatisation, leaving the public extremely vulnerable. These employees now face having their unions handcuffed, the only people fighting for workers’ rights won a generation ago, by further draconian anti-trade union laws being pursued by David Cameron and the Conservatives. It is time for us to stand up for them, as they do for our families, from the classroom to the ward room and combat these attacks on workers’ rights. In doing so, we may help to foster an atmosphere in which they are willing to remain.