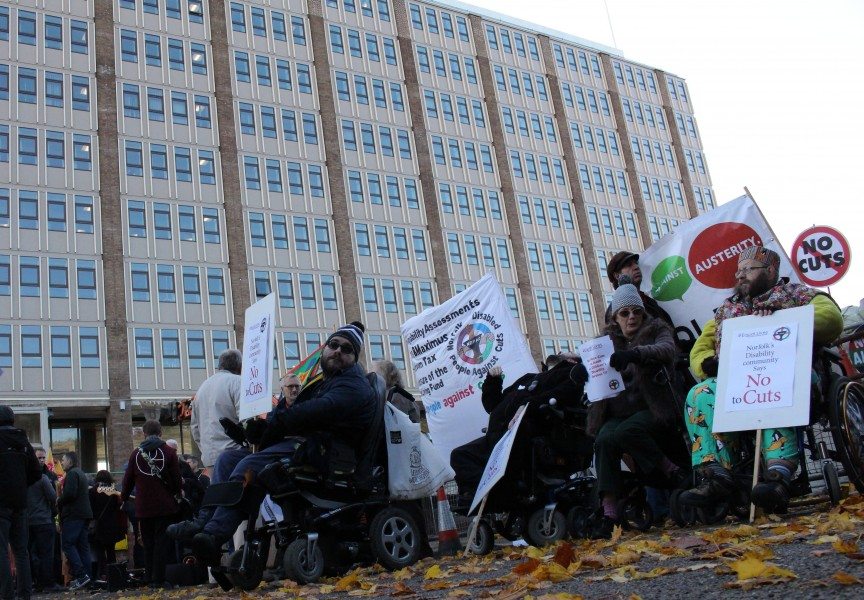 As austerity begins to bite really deep, people are urging their local representatives to reject the government’s relentless cuts. Regional leaders have defied Westminster before and they need to do so again, before public services are destroyed forever.

This morning activists from groups including Norfolk People’s Assembly, the Fire Brigades’ Union, Disabled People Against Cuts and Friends Of The Earth greeted Councillors arriving at Norfolk County Hall to discuss the latest plans for implementing Tory cuts. Bizarrely, Norfolk is not run by the Conservatives, although they hold the largest number of seats. Instead, an uneasy “Rainbow Alliance” of Labour, UKIP and LibDem, along with supporting Green votes, prevents Tory control.

But still the Conservative party is the one pulling the strings of people’s lives. The latest settlement from the Treasury leaves Norfolk with a £111m shortfall over the next three years. Rather than reject this cut of about 16%, the Rainbow Alliance has adopted the compromise of attempting to identify good cuts and bad cuts. All departments have been instructed to draw up plans based on a 25% budget reduction. The idea is that this will create the headroom to protect vital spending.

Critics argue that it is completely unrealistic to expect any branch of council provision to function properly with such hefty cuts and that a false distinction is being created between essential and non-essential services. They have also suspected that the figure of £169m (total reduction based on 25% overall) is being talked up in order to make cuts of £111m seem reasonable.

In fact it would appear that is exactly the case. Following the meeting, local news are reporting that £50m of cuts have been “abandoned”. This is just cynical PR from the Council, trying to paint itself as the good guy for saving libraries. Of course this is good news for the reprieved services but it will mean the axe falls heavily elsewhere.

The Fire Service has been spared the worst of the cuts but still two stations may be closed, a further blow to an already eroded service. Speaking to The Canary earlier, Pete Greeves, Chair of FBU Norfolk, warned that the proposed cuts would have put tens of thousands of Norfolk residents at greater risk of dying in fires. 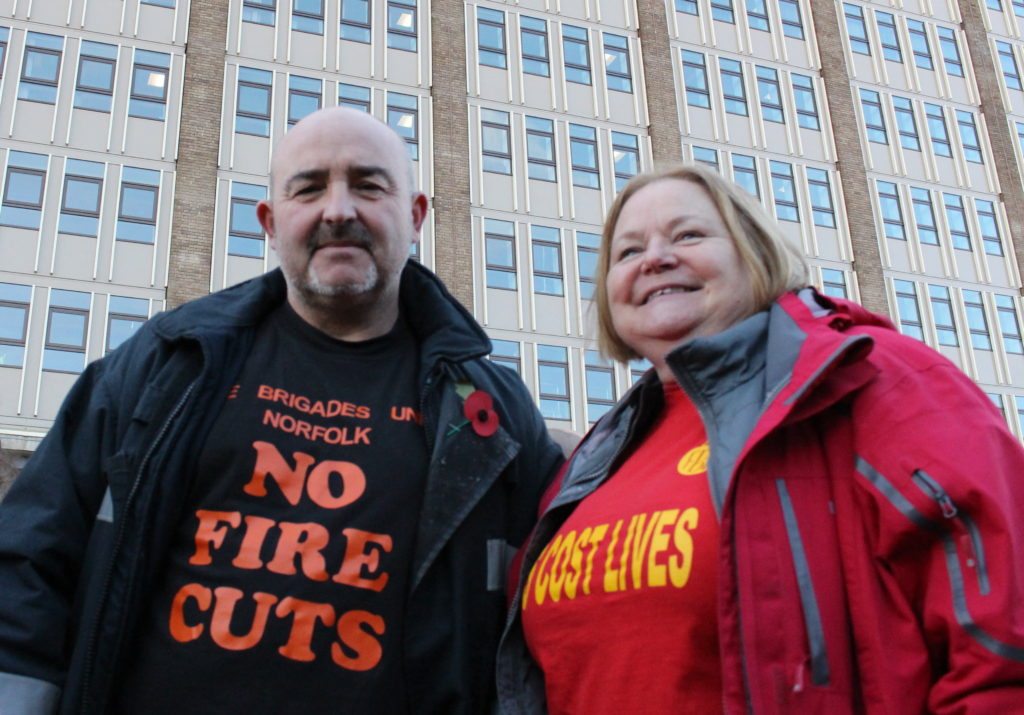 Laura Godfrey came to County Hall with her disabled son Oscar, to highlight the impact of both past and future cuts:

We’re here today to show solidarity with disabled adults and children, the elderly and everyone affected by these cuts to essential services – these are essential services, they’re not anything extra and the cuts are going to hurt the most vulnerable people.

We have a respite budget for a carer for Oscar which is currently up for review but I have a lot of friends who are parents of disabled children and they’re facing a cut in their hours or finding it difficult to get contracts renewed for next year. Even a friend of mine, whose daughter passed away last year, couldn’t access any respite services while her daughter was dying. So I’m here to show solidarity and because I’m really concerned about the future for my son. 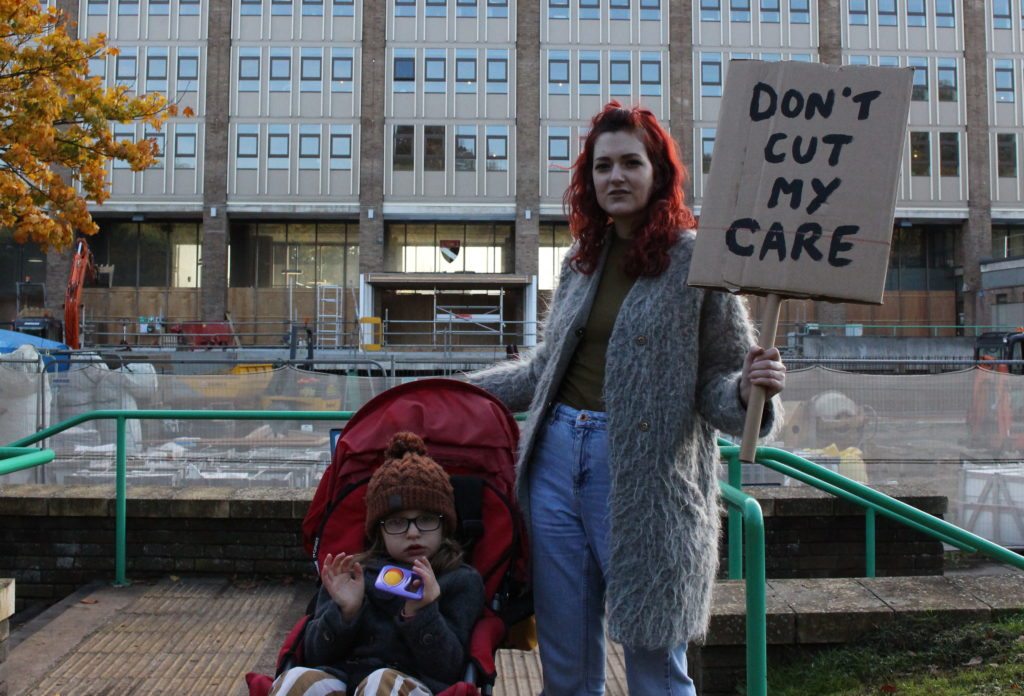 “There are rich people and poor people in Norwich and guess who’s going to suffer?” said former Labour MP for Norwich North, Ian Gibson. “I’ve been coming here to picket lines for 45 years and all you ever heard about was cuts and here we are again, more cuts.” When asked whether the Council should consider refusing to implement the cuts, Gibson warmed to his theme:

Oh yes, I have great views on that. I remember the old stories of Poplar Housing and of Dennis Skinner and his family in Derbyshire who just refused to go along with the way of thinking that you have to make cuts. What I say is: ‘Stand up and say we’re just not going to do it’ and if some people want to do it, well, let them do it. We’ll remember at voting time who did it.

This view is echoed by the People’s Assembly Against Austerity which adopts a blanket opposition to cuts, arguing that they aren’t being driven by necessity but by political choice. If enough councils acted together, setting so-called “illegal budgets” (i.e. based on pre-cuts settlements and configured around need, not lack of funds), the government would be forced into a corner. This has been tried before with at least partial success.

Norfolk People’s Assembly has called on the councils of both Norfolk and Norwich to take the lead in pushing back against the government’s austerity agenda but recognise it would be hard for any one body to act alone. But a concerted build-up of pressure across the country might create a sense that local politicians don’t have to keep doing the government’s dirty work and that they can fight for the people they represent rather than against them.

All photos by the author John Ranson