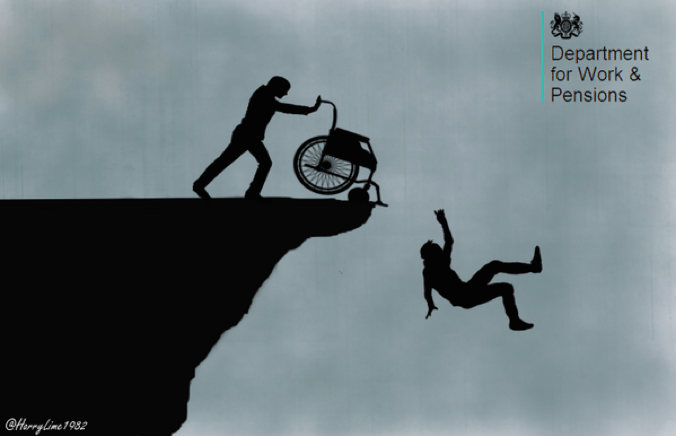 The War on Welfare (WoW) petition gathered over 104,000 signatures demanding a Cumulative Impact Assessment of austerity on sick and disabled people and their families. But the government has responded with a flat refusal to do so. This constitutes a(nother) massive ‘F*ck you’ to sick and disabled people (and their families) across Britain, from a government who refuse to find out the true cost of their cuts.

The excellent blogger Sue Jones lays out the urgency of the impact assessment:

The number of households with a disabled family member living in “absolute poverty” increased by 10% between 2013 and 14. Absolute poverty isn’t the same as relative deprivation – our usual measure of poverty – absolute poverty means that people can’t meet their basic needs, such as access to food, fuel or shelter.

Such a rise should set alarm bells ringing.

It might seem strange to those fresh to this issue that a government would even consider going ahead with radical cuts to welfare and services which affect the most vulnerable without a full impact assessment either before or after the fact. Just as we would all look to our left and right horizons before crossing a road, or make sure the gas hob is off after we’ve finished cooking a meal – we would expect the same simple prudence from our government. But sadly, such prudence is missing from the current front bench and Department of Work and Pensions chief, Iain Duncan Smith.

The government has argued consistently that it’s ‘welfare reforms’  are about making it easier for sick and disabled people to enter and remain in the workplace, and for more focussed support to be given to those who cannot.

If genuine, this would be a fine aim. We know that many workplaces fail to cater for employees who do not fit certain health/physical capability criteria, and by doing so, they exclude whole swathes of the population who could otherwise contribute skill and talent to the job. It is also clear from repeated studies that the sense of purpose and self-fulfillment that comes from being part of the workforce can have a positive impact on physical and mental health.

And it’s hard to find anyone who would argue in favour of someone who doesn’t require it, to rely on the welfare system.

If the government was seeking to increase access to the workplace for sick and disabled people, it would not be cutting the very programmes supporting them to do so.

Up and down the country, there are millions of people with severe or terminal illnesses, lost limbs, paralysis and conditions such as cystic fibrosis, cerebral palsy, MS and ME who are willing and able to pursue careers. However, the costs to take on or continue a career when unable to use certain or all kinds of public transport, or operate a car, or function without a personal assistant/carer are considerably higher than for those without such requirements. In order to make it viable to work in these scenarios, the DWP provides financial support through schemes like the Independent Living Fund. The government has seriously reduced or scrapped them all.

If the government was wanting to focus its resources on those who are truly incapable of work, then we would expect those programmes to be strengthened. Instead, they are also being cut. If we look at Employment Support Allowance which is paid to people who have been forced to give up work due to accident or illness, the government is dramatically reducing the amount payable to claimants. According to the Guardian:

“charities say the near 30% cut in a benefit claimed by hundreds of thousands of sick and disabled people, including those with mental illness, cancer and Parkinson’s disease, will cause widespread hardship.”

There is no logic to this. If the government was supporting those who are capable into work, and weeding out fraudulent claimants successfully, then there is absolutely no need to cut welfare for the remaining, totally legitimate (in their eyes) claimants. If the government’s stated aims were authentic, then these programmes should either remain as they are, or be increased with the funds saved elsewhere.

Instead, the government is making it harder for sick and disabled people to work, and harder for them to survive without work.

This, together with cuts to social care and the NHS, the addition of the Bedroom Tax, and other measures mean sick and disabled people are being hit from every which way by the government’s austerity programmes.

Furthermore, the government has actually undone provisions in Equality law put in place by Labour to ensure such disproportionate harms were avoided. One of Home Secretary Theresa May’s very first acts in 2010 was to scrap the legal requirement in the Equality Act for public bodies to reduce inequalities caused by socio-economic factors.

The Pleading of Ignorance

When asked to perform the Cumulative Impact Assessment, the government simply created a bogus reason why it was impossible and moved on.

As a statement on the WoW campaign website reads:

It would also appear that Mike Penning MP misled the House during the debate when he stated “the Institute for Fiscal Studies has also said that that could not be done properly and accurately enough.”5. The IFS have stated on numerous occasions that they do not hold that position.6Additionally, since the WOWdebate, the DWP’s own advisors, The Social Security Advisory Committee, have concluded that the Government could and should provide an analysis of the cumulative impact of its welfare reforms on disabled people7 and the Equality and Human Rights Commission and The National Institute of Economic and Social Research, recommended “that HMT incorporates breakdowns of the cumulative impact of tax and social security measures according to protected characteristics into its distributional analysis as a matter of course.”8

In short, the government could perform the Cumulative Impact Assessment. They are not lacking the way, they are lacking the will.

So why doesn’t the government want to perform a Cumulative Impact Assessment of it’s austerity programmes on sick and disabled people and their families?

Answer: Because they already know the result, and it’s devastating for their case.

They already know because just such an assessment was already undertaken by Landman Economics and The National Institute of Economic and Social Research on behalf of the Equality and Human Rights Commission. It found that disabled people and their families have been the hardest hit by the government’s austerity programmes. Another assessment by The Centre for Welfare Reform came to the same conclusion.

If the government was operating a genuine austerity drive in order to promote work for those capable and focussed support for those who are not, they would welcome a Cumulative Impact Assessment.

If the government was operating in an evidence-based fashion, they would welcome a Cumulative Impact Assessment.

The government does not welcome a Cumulative Impact Assessment because they do not want evidence to over rule their ideological commitment to austerity.

The only people who avoid or reject evidence because it threatens their ideological position are zealots; and this government is full of them. Until they are held to account, it is primarily sick and disabled people, and their families, who will pay the price.

WoW campaign have responded the government’s intransigence by setting up a new petition which you can sign here.