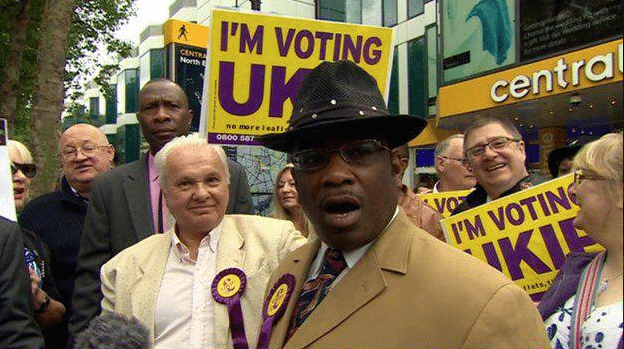 As a mixed race woman whose Caribbean-born grandfather married a white Bristolian woman in the 1950’s, I find the sort of ‘send them home’ bigotry of UKIP not just politically but personally offensive. So it was with a mixture of bemusement and hilarity this morning that I came across this story: the party’s token black guy, Winston McKenzie, has quit – claiming he suffered racial discrimination.

“I’m incensed at the present moment because where I stand in UKIP, I feel as though I’ve been completely ignored, racially discriminated against by people in the higher echelons of the party.

“I’m talking about the leader’s followers.”

No, Winston McKenzie, you didn't get on in UKIP because they are racist. It's because you're a knob. As I warned @Nigel_Farage when u joined

#Ukip Winston McKenzie sure was a certified unhinged party-jumping fruitloop.

Also a man that #Ukip vetted and promoted as a Candidate.

It’s difficult to read about his case without breaking into a fit of the giggles. One has to ask: why on earth would a black man join UKIP in the first place? But the answer is simpler than it seems.

The attraction of UKIP for men like McKenzie is to join the club. It would be futile to highlight UKIP as homophobic, transphobic or xenophobic – they are omniphobic.  They are appalled and terrified about pretty much everything which doesn’t look and sound like them. Men like McKenzie are just as capable of being omniphobic too – and he thought that made him at home with UKIP. He thought that they didn’t see the colour of his skin but the content of his character. Which makes him not only a fool, but a hypocrite. He expected a level of human respect from UKIP which he is not willing to grant contemporary immigrants, or gay people, or any of the other scapegoats UKIP go after.

This, after all, are the party members he calls friends.

In 2010, the party suspended its Chairman for London, Paul Wiffen, after he made the following racist rant on an internet forum.

“You Left-wing scum are all the same, wanting to hand our birth right to Romanian gypsies who beat their wives and children into begging and stealing money they can gamble with, Muslim nutters who want to kill us and put us all under medieval Sharia law, the same Africans who sold their Afro-Caribbean brothers into a slavery that Britain was the first to abolish.”

More recently UKIP candidates were found to be posting pictures of themselves making Nazi salutes, and one candidate created this picture of himself as one of Hitler’s henchmen using photoshop. 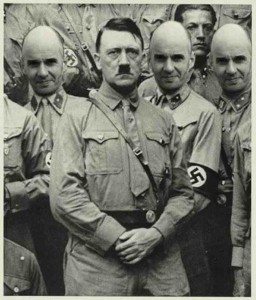 There is also significant crossover in both candidates and supporters, from the British National Party (BNP) to UKIP.  UKIP are the polite face of the same old ‘loathe thy neighbour’ politics of hate and envy.

Recent discussions on the UKIP online member’s forum on homosexuality and gay marriage were particularly enlightening.

“As for the links between homosexuality and paedophilia, there is so much evidence that even a full-length book could hardly do justice to the ­subject.”

“The evidence is quite clear that the percentage of homosexuals who molest children is very high and cannot be dismissed.”

“What irritates me is they (sic) way they and their leftie, neo-Commie followers seem to want to force the rest of us to consider them as normal.”

A vote for UKIP, whether you like it nor not, is a vote for a party of afraid, angry, hateful people. McKenzie has been hoisted on his own petard. This does not exempt him from applying the law of the land to protect himself from discrimination, but it should also serve as a wake up call. If he doesn’t want to be judged on attributes he cannot change, he sure as hell needs to stop judging others.