Fires threaten refugees across Europe, as winter draws in - Canary 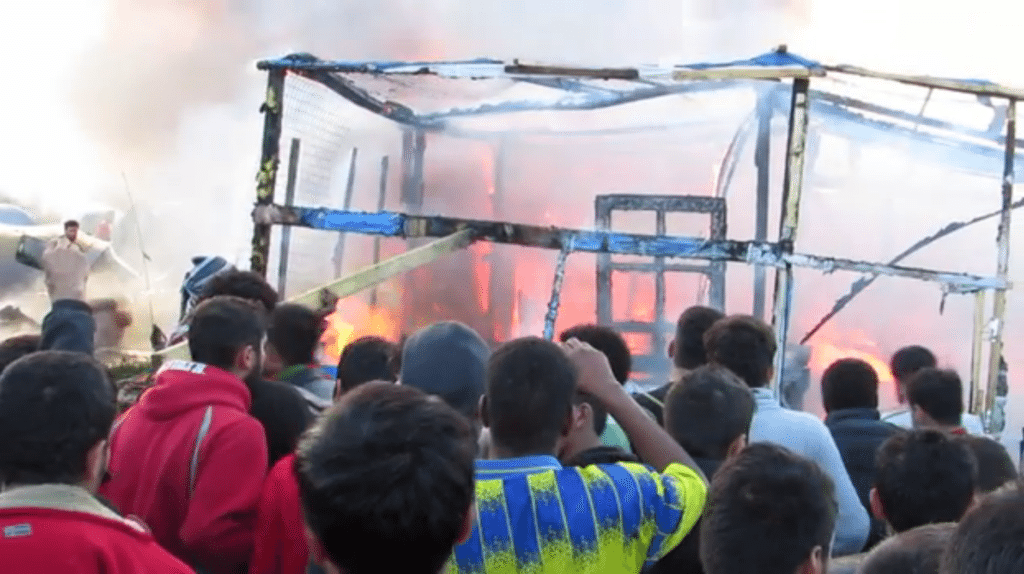 A fire followed by two explosions broke out on Sunday afternoon in the Calais refugee camp.

French sources report that two people were injured and that the explosions affected several shacks; the extent of the damage was, fortunately, minor, but the risk of more fires breaking out will continue to be high.

Firefighters arrived on the scene within half an hour, escorted by police. A spokesperson for the local government said that police presence was requested after several refugees began throwing stones at the intervening vehicles.

The incident was filmed by Ryan Blum, an American student who was conducting interviews in the refugee camp. “As I was leaving my car, I heard a giant explosion and a huge gust of black smoke,” he told BuzzFeed News.

There was panic, it was pandemonium. There was a human stampede to escape the fire, and many of us were pushed over.

Sunday’s incident may signal a growing phenomenon in refugee camps across Europe this winter.

This is already the fifth time in recent weeks that a fire has broken out in Calais, and on 21 October a fire in a refugee camp in Slovenia burnt down several tents after 2,000 people arrived at the camp in one night alone. The fire was put out by firefighters, and refugees were evacuated by Slovenian riot police.

In the Slovenian camp, as in Calais, refugees have started to light fires in order to fend off the cold, but the state of their precarious encampments is such that these fires can easily get out of hand.

Given the present conditions of overcrowded, makeshift camps and poor or non-existent heating facilities, it is no wonder that fires get out of control. Temperatures are dropping – yet in October alone 218.000 refugees crossed the Mediterranean.

The camp in Calais, dubbed ‘the jungle’, is already a makeshift home for around 6.000 people, but the conditions there are verging on the inhuman as the weather takes a turn for the worse.

An emergency appeal put forward last week by NGOs on the ground has been approved by the local government, which is now bound by law to take urgent measures to improve living conditions in the camp, according to a local media outlet. The evidence is piling up, the ‘jungle’ is not fit for anyone.

And yet a government inquiry ruled out the possibility of an epidemic, declaring that everything is under control. The report goes on to specify that refugees in the ‘jungle’ are allowed to be seen by doctors for up to 5 minutes each.

In previous years, the influx of migrants and refugees into Europe was already in decline by October. This year however things are very different, and refugees will need much more than firefighters and riot police from our governments.