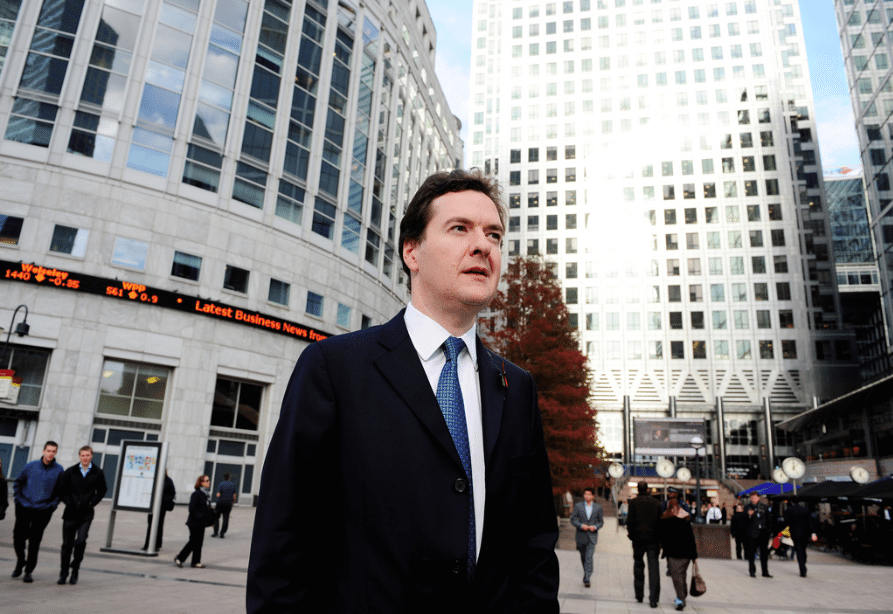 UK Chancellor George Osborne has just given a gift to his friends in the city of London which will cost the UK taxpayer an additional £135n of national debt.

Just before the 2015 General Election, the Tories came up with a throw away Right to Buy policy for housing associations, labelled “back of a fag packet” thinking by HM Treasury staff.

Osborne’s ‘solution’ to a housing crisis triggered by the lack of affordable housing, was to force housing associations, private bodies outside the public sector, to sell off social housing at a 20% discount to existing tenants.

Many commentators noted, both in the media and in submissions to the DCLG inquiry into ‘Right to Buy’ that the move threatened to add at least £60bn to the UK national debt.

For accounting purposes, housing association debt is considered “off-balance-sheet.”  Since Thatcher sold off local authority housing stock in the 1980s, social housing has been delivered by housing associations, which are private bodies financed by bank loans, not by central Government borrowing.

Debt accumulated by housing associations has not counted towards the UK Government debt figures until now, even though housing welfare payments, distributed via local authorities, ultimately fund the loan repayments.

Curiously, the UK media and “free market” think tanks like the IEA have failed to comment on the hypocrisy of a Conservative Government, which sold off council housing explicitly to avoid state intervention in housing, now directly intervening in the free market to sell-off said ‘private’ housing?

So what’s going on with Housing Association Finance?

Absent in almost all media coverage of the Right to Buy, is an analysis of how housing associations are actually financed. Largely by private banks.

Previously, local authority house building was financed via Government grants and loans from the Government Public Work Loans Board, but all that changed under Thatcher in the 1980s.

The council housing sell-off under Thatcher coincided with the ‘big bang’ deregulation of financial markets, meaning the mortgage market, which had previously been the exclusive domain of building societies was opened to high street UK banks.

Unsurprisingly therefore, we find that the usual suspects, Lloyds (£14bn lending), Barclays (£12bn) Nationwide, Santander and RBS are the largest lenders to the social housing sector, as at 2011.

Further repeal of financial regulation (such as Glass Steagal) preventing banks from issuing both loans and derivatives to retail clients, has also spilled over into financialisation of the social housing sector.

A closer look at the accounts of housing associations reveals that these bodies are now highly financialised, with around 70% using complex swaps and derivatives to “manage interest rate risk,” even though the use of stand-alone derivatives use was made illegal for public authorities following the 1989 Hammersmith and Fulham case.

Rather than manage risk, the net effect of derivatives is often to introduce risk to housing association balance sheets.

Essentially, what the Circle Housing accounts above are stating is that they have hedged their interest rates using derivatives subject to International Swaps and Derivatives (ISDA) agreements, and housing stock is now pledged as collateral against movements in interest rates, which the housing association has to cover.

The banks and brokers, who take fees and margins on the myriad of resulting financial contracts are the major benefactors.

As Peter Crowley points out, the resulting losses (at £140m per year) can be substantial, and there is more than minor element of (state sponsored) gambling at play here.

The point Nicholas Dunbar and Stephen Middleton are making relates to the constant fear mongering of the Bank of England (Mark Carney) and US Federal Reserve (Janet Yellen) raising interest rates. Even though economies in the developed world have failed to regain lost productivity since 2008, and the so-called recovery is a QE fuelled mirage.

With constant talk of rate rises, as we have seen with the heavily indebted, QE reliant Japanese economy, while rate hikes have not materialised in over 20 years, the City can continue to sell fixed rates loans and derivatives to chump clients like housing associations wanting interest rate “protection”, even though the risk of rates increasing is slim to none.

So how much bank debt will Osborne’s Help to Buy Generate?

However 2014 universal HCA accounts suggest that the ‘book value’ of housing association debt to be transferred to the public sector is actually £135billion which according to Jonathan Portes, equates to “one of the largest nationalisations in UK history” and not the £60billion quoted by Government.

Such contrasts between stated book value, and the actual market value are broadly consistent with the costs of comparable “lender option, borrower option” (LOBO) bank loan contracts sold to councils and housing associations, the subject of a current DCLG inquiry, where derivatives break costs, a penalty of exiting the loans are known to be greater than 90% of the loan value.

Ultimately, it is the taxpayer who will be forced to wear these costs.

Thatchers original Right-To-Buy policy was a god send for the banks, transferring hundreds of thousands of houses into the private market, just as big-bang deregulation meant they could be leveraged up by banks, and collateralised against swaps and derivatives contracts.

Because the headline interest rate for bank finance is always higher than Government finance, the net effect of Help-to-Buy has been a significant transfer of wealth in the form of interest and housing payments from the public sector to the banks.

By bringing housing associations back under state control as new accounting changes in the form of FRS 26 take effect from 2016 onwards, Osborne is transferring an enormous private sector burden of bank debt, onto local authorities, which  will be forced to pay for the Right to Buy discounts, by selling remaining housing stock.

As with PFI, it now appears the Conservatives have engineered a vast deception, to financialise the public sector by stealth, with complex bank loans and derivatives, commonly thought illegal for use by public authorities.

It’s not as if the Conservatives were not warned of the risks of the Help To Buy policy, but if you can count on the Tories for two things, its to always act in the interest of bankers, and to never listen to public criticism.

This article was authored by Joel Benjamin, and originally appeared on maxkeiser.com