5 things they're not telling you about Universal Credit - The Canary 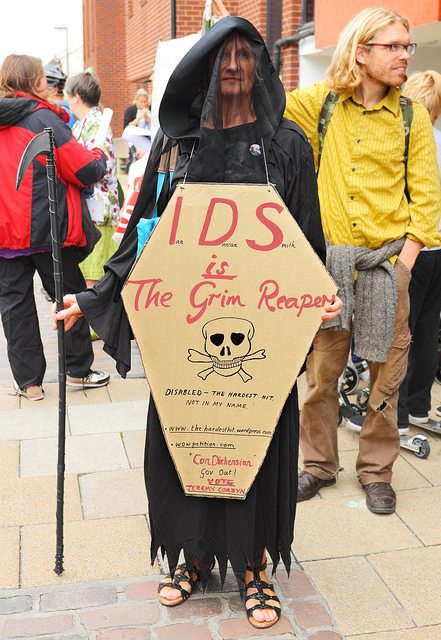 Despite astronomical and spiralling costs of £15.8 billion, Iain Duncan Smith is pressing ahead with rolling out his flagship scheme of Universal Credit, designed to “make work pay”. Universal Credit is designed to be an all inclusive benefit, combining jobseeker’s allowance, income support, housing benefit, child benefit, working tax, and child tax credits into one payment.

Beset by delays and computer problems, the scheme was originally expected to be implemented across the UK by 2017, and now may not be fully implemented until 2020.

However, this is only the start of the problems. Here are some of the other drawbacks they are not telling you about Universal Credit: –

1. Working families will lose out:

Everyone currently claiming Working Tax Credits will need to transfer to the new system. However, low income working families will be considerably worse off. A review by the Resolution Foundation found that reducing the number of hours worked for the second earner might become a more attractive option, with 65p out of every extra £1 earned being deducted from the benefit.

Improvements necessary to enable Universal Credit to, at a minimum, make work pay and smooth the transition into work must be made before millions of families are moved onto the new system.

Instead of improving this situation, things could be about to be worse, with George Osborne currently arguing with Iain Duncan Smith to increase this rate to 75p to help balance the books following the defeat of his tax credit proposals.

Furthermore, under Universal Credit, those claiming in-work benefits will have to sign up to a ‘Claimant Commitment’ similar to the ones currently being enforced on those claiming Job Seekers Allowance. This agreement will mean a person in part time or low paid work will be forced to spend a certain amount of time looking for extra work and attend regular appointments with the job centre. Anyone not complying with these conditions will be sanctioned.

2. Reduced help for the self-employed:

Despite David Cameron’s claims that small businesses are the “backbone of the economy” and his pledge to create 600,000 new businesses by 2020, Universal Credit will penalise the self-employed. Not only will those who are self-employed be submitted to the same procedures detailed above, after the first year, there will be a presumed ‘minimum income floor’, based on working 35 hours a week at the minimum wage. This means any entitlement to in-work support will be done on the basis of a £12,194 annual income. If wages fall below this, there will be no top up. However, as soon as earnings go up, the amount of benefit will immediately be reduced. Therefore there are no adjustments for  seasonal and other variations which are common in self-employed work. Neither are allowances made for self-employed people who work part time, and many people will find there are times of the year when they are struggling.

3. It can be difficult and costly to apply for the benefit:

Firstly, you have to apply online. This is fine if you have ready access to a computer and broadband. However, many of those on low incomes cannot afford internet access. According to 2013 figures, 4 million households did not have internet access. Of these, 20% said it was due to lack of computer skills, and for 13% this was due to equipment and access costs. These problems increase for anyone with low literacy, learning disabilities or for whom English is a second language.

There is a telephone line you can call for help with filling in the application, but calls to this number can cost up to 40p per minute. If you want to apply over the phone, this can take up to 40 minutes, meaning the application could cost up to £16. There is a call back service, but this will only be utilised if requested.

Making mistakes is costly. If you make a mistake filling out the form, however innocently, this will incur a £50 penalty charge which will be deducted from your first payment. This additional charge on the poorest in society, was estimated in 2011 to bring in £60 million to the government over four years.

Unlike current benefits, Universal Credit will paid one month in arrears. Not only will this mean a delay of at least five weeks before an initial payment is made, there are also difficulties with people having to budget all their money, including their housing benefit, over the course of the month.

According to the Child Poverty Action Group:

Lump sum monthly payments for all elements of UC, including children and housing costs, will make it difficult for some claimants… being left without money if it is all used before their next payday or if something goes wrong with their payments.

This lump-sum approach to payments also presents huge problems for households where there is addiction or domestic abuse, given that the whole payment for the household will be made to one account. For example, if one family member is an addict, and they have access to the account, they could spend the entire monthly allowance on feeding their addiction. Jimmy Wilson, the acting Chief Executive of FARE (Family Action Rogerfield and Easterhouse) in Glasgow believes “people will misuse their Universal Credit.”

Parents could misuse family funds – potentially they could be addicts or they haven’t had the background to cope with that amount of money all at once.

Sanctions, which are already causing huge problems for claimants, are set to increase, with those on tax credits also liable to punishment if they fail to meet the conditions of their ‘Claimant Commitment’. Furthermore, for those on the tax credit element, these sanctions will also include the housing element of the benefit. Additional problems are likely to be caused by the fact this is a lump payment, meaning any reduction will have a knock of effect in ability to pay the rent, as people are likely to use the housing element to put food on the table.

This is a horrendous, ill-conceived system that will punish those who need help the most. However, the system has yet to be fully rolled out, and there is still time to stop it. The Conservatives have proved time and time again that they are out of touch with the reality of most people’s lives. They have no interest in helping the working poor, or those who need benefits to survive, preferring instead to line their own pockets and those of corporations. We all have a responsibility to take action before the welfare state is demolished completely, and we are left with a Dickensian nightmare.