Osborne's next round of cuts is so cruel, even Iain Duncan Smith has threatened to resign - The Canary 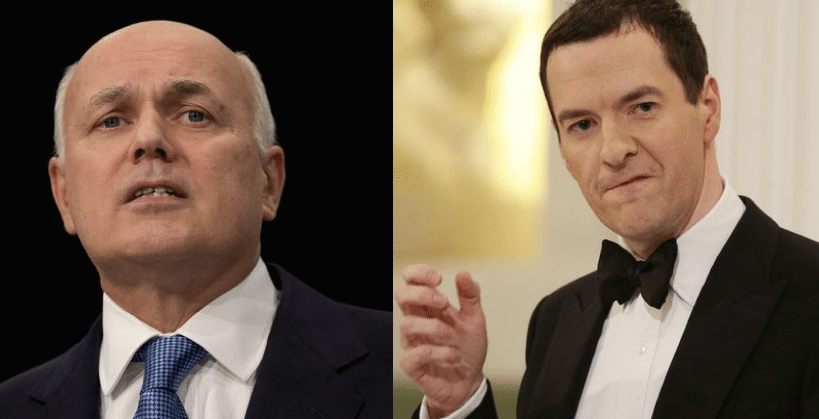 Iain Duncan Smith has delivered round after round of cuts to the welfare state without flinching. But George Osborne’s latest plans are so cruel, even IDS was appalled, threatening to quit if they were implemented. The Chancellor has called his bluff, and plans to make the cuts regardless.

The Secretary of State for the Department of Work and Pensions knows that Universal Credit is already delivering a major cut to the incomes of those who need to claim it. There is no fat to trim. Our colleague Emily Apple detailed the existing cuts last week:

Yet for George Osborne, this wasn’t tough enough. He wants even greater cuts. So, Iain Duncan Smith threatened to quit. Issuing the threat through a ‘friend’ to The Times, who said:

“The Treasury have come after UC [universal credit] at every fiscal event and Iain has made clear every time that this is a red-line issue for him. “That is the case now as it has been in the past.”

What was the Chancellor’s response?

He came out today and announced the cuts anyway; a staggering 30% from each government department (some of which have already had their budgets halved) by 2020. Announcing his cuts, Osborne said:

“That’s why, for the economic security of every family in Britain, the worst thing we could do now as a country is lose our nerve.”

Labour’s Shadow Chancellor John McDonnell was quick to respond to news on Twitter.

Osborne talks about security but people want the security of knowing their tax credits are not being cut.Why can't he tell us now?

He has a point. The Chancellor has some nerve invoking the economic security of working families as reason for his cuts. Ideological austerity is not the solution to their poverty, it is the cause of it. Under Osborne’s watch:

At the same time as we have seen 20% rent hikes in social housing, and 15% in the private housing sector, alongside falling wages and slashed welfare payments.

Yet, the Chancellor has continued to reduce tax revenues from the wealthiest corporations and individuals in the country.

The Chancellor is trying to pay for these cuts in taxes for the richest, by cutting welfare and services for the middle class, the  working poor, and those reliant on the welfare state. Osborne has taken this ruse so far that even Iain Duncan Smith, the axeman of austerity, has flinched. But still, he cuts.

It is clear that David Cameron and George Osborne plan to accelerate the demolition of the welfare state in advance of the next general election. It might be that the opposition need to accelerate plans to bring about their downfall with similar vigour.