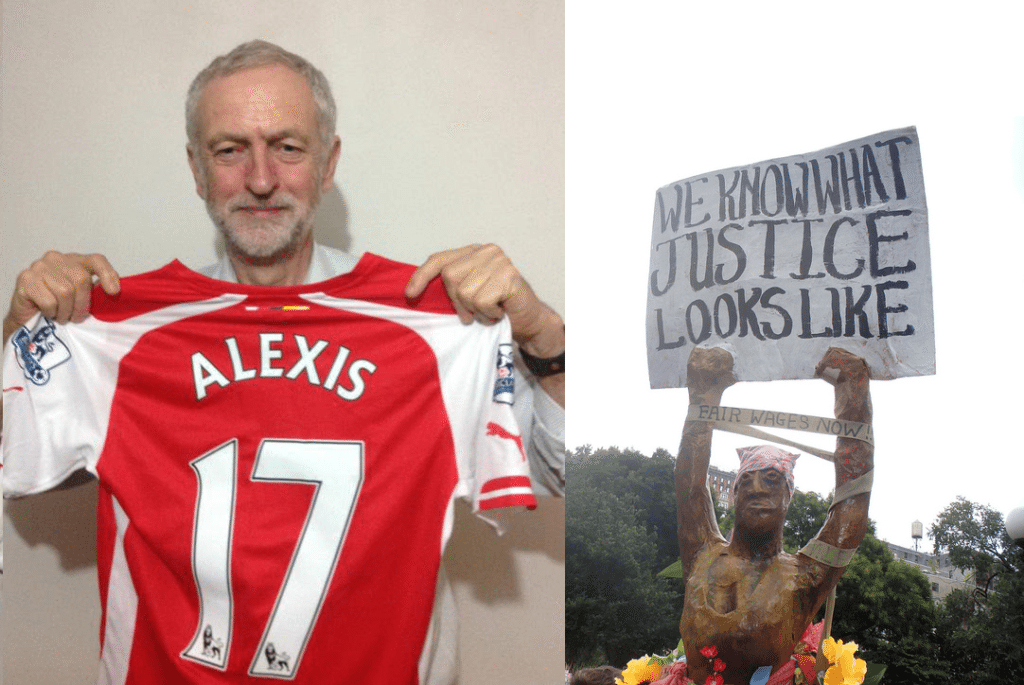 The Labour Leader was accompanied by London mayoral candidate Sadiq Khan at the demonstration outside the Emirates Stadium.

Corybn went straight from his official duties at two Remembrance Day services to take part in some grassroots activism. A die-hard Arsenal fan, he once backed a motion in Parliament declaring them “The best team in the world”.

While Arsenal football club pays the £9.40 London Living Wage to those directly employed by the club, this does not apply to third parties, such as cleaners or contractors. The protest was in part to argue that, whoever is on the other end of your pay roll, they should receive enough to live on. As Corbyn joked:

We think, by the way, the players already get the Living Wage

Arsenal can certainly afford to pay all its workers enough to make ends meet.

Which other EPL clubs pay the Living Wage?

Corbyn also recognised the precedent that could be set if all football clubs in the top flight paid the Living Wage.

Imagine the message we could send if Arsenal, and other Premier League clubs in London, pay the London Living Wage.

The Independent questioned clubs on whether they pay the London Living Wage. Several clubs, such as Manchester City, Chelsea and Tottenham Hotspur, join Arsenal in paying the Living Wage to permanent employees. Still, this does not include part-time or contracted staff.

Numerous clubs, including Southampton, Aston Villa and Newcastle United, declined to comment. It is very tempting to interpret this silence as meaning ‘no’; why would any company, football club or otherwise, be shy about admitting it pays the Living Wage? Especially as most people would simply assume it does not when it refuses to be drawn on the subject.

Meanwhile, the top 20 football clubs in England are about to see a pay rise to £81m per season.

The protest occurred before a north London derby between Arsenal and bitter rivals Tottenham. However, it would appear that the allure of the Corbyn movement – a genuine threat to the permanent political class – is enough to transcend even the fiercest of football rivalries. The chance for real change has bridged a gap once thought impossible. A Spurs fan even walked up to Gunners-lover Corbyn and told him:

You’ve got to be our Prime Minister.

To which, Corbyn replied:

Even from a Spurs supporter?

The man looked him dead in the eyes and answered:

You seriously have to be.