Everything you need to know about #Bowgate, and the media's anti-Corbyn desperation (Tweets) - Canary Workers’ Co-op 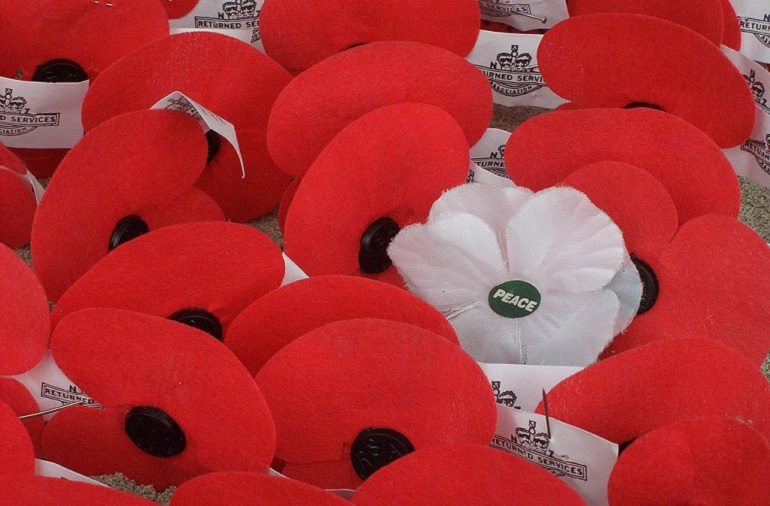 The corporate media are scared, and their constant attacks on Jeremy Corbyn and his supporters are proof of that. Now, by criticising the Labour leader on one of the most solemn days of the year, Monday’s front pages have shown the desperation of media owners more clearly than ever before.

By accusing Corbyn of not bowing his head correctly at the Cenotaph on Remembrance Sunday, a number of media sources opted yet again for demonisation rather than professionalism. Fortunately, criticism of these tactics immediately hit Twitter:

Shameful hijacking by press/media of Remembrance Sunday to try to discredit #Corbyn yet again. Who is really dishonouring the fallen?

Corbyn not doing a massive bow isn't disgusting. The media using #RemembranceSunday as an excuse to attack him is disgusting.

And this anger was all the more justified given the fact that Corbyn’s note on the poppy wreath he had laid read:

In memory of the fallen in all wars. Let us resolve to create a world of peace.

In other words, this was not a man who disrespected the dead but one who was committed to ensuring that no more soldiers would die in the future. What better tribute could there be for those who sacrificed their lives in past wars?

The logic of the anti-Corbyn media

As Labour campaigner James Asser pointed out on Twitter, impartiality is not a word with which the right-wing media is familiar:

This #bowgate thing is absurd. If @jeremycorbyn had crawled across Whitehall it wouldn't have been good enough for the Telegraph, Sun & Mail

While focussing on his bow, for example, Corbyn’s detractors in the media failed to report on how the Labour leader, unlike David Cameron, had endeavoured to spend time with war veterans:

It was moving meeting veterans and others at the Remembrance Sunday service this morning #RemembranceSunday pic.twitter.com/GvDlYQ3NRk

Why did millions of young soldiers die? For freedom? No, so right-wing idiots can soil their memory to criticise @jeremycorbyn! #bowgate

#Bowgate: Proof #RemembranceSunday is not for ensuring we don't repeat past errors, but warming up country for further military misadvanture

In short, the most powerful media outlets in Britain had a vested interest in maintaining the status quo and delegitimising Corbyn. As media watch group FAIR has reported:

Not surprising that they would seek to portray a pacifist as anti-patriotic, then, while letting David Cameron off the hook over his photoshopped poppy.

Contrary to the mass media narrative, says Channel 4’s Paul Mason, the first world war actually came to a close thanks to “working-class action” from German sailors who wanted the conflict to end. These workers, he asserts, had occupied the streets of Berlin and forced the Kaiser to abdicate, leaving the Social Democratic Party in charge of the new republic.

Human rights activist Peter Tatchell suggests that the same could have been true in Britain, as the country’s army during the first world war was:

notorious for its frequent appalling mistreatment of working class lower ranks by arrogant, out-of-touch upper class officers who often exploited ordinary soldiers as their personal servants and, under fire, as expendable military ordnance.

As a result, he stresses, there were “widespread military mutinies, strikes and riots” towards the end of the war (and on into 1919).

Why is the media so scared?

The stories above, however, are seldom told in the mainstream media. Working-class soldiers being mistreated and deployed at the whim of political elites, whether in Britain or Germany, are apparently not worthy of remembrance. Nor are the immense numbers of senseless deaths.

The reason for this, argues journalist Neil Clark, is that there has been “a new era of militarism” since the Falklands War, which changed the sombre remembrance of the two world wars into a tool:

Remembrance must be saved from neo-con militarism and return to being the… less hypocritical commemoration it was in the 1970s.

And that is what Jeremy Corbyn seeks to do. By amplifying the voices of Britain’s workers and criticising the politics of death and suffering, the Labour leader has disturbed the peace among societal elites. He firmly believes that war and injustice do not have to be the destiny of the human race – and that belief puts their economic interests at risk.

politicians who took us to war should have been given the guns and told to settle their differences themselves, instead of organising nothing better than legalised mass murder

For Corbyn, there are fewer causes more worthy than empowering working people so that such “legalised mass murder” never occurs again. And this is what truly worries powerful and influential media moguls today – not whether Corbyn bows, kneels, or kisses royal hands in the right way. They are worried because he presents a challenge to the political status quo.

That is why the corporate media is getting more and more desperate as the days go by.

To demand an apology from The Sun, please sign this petition.