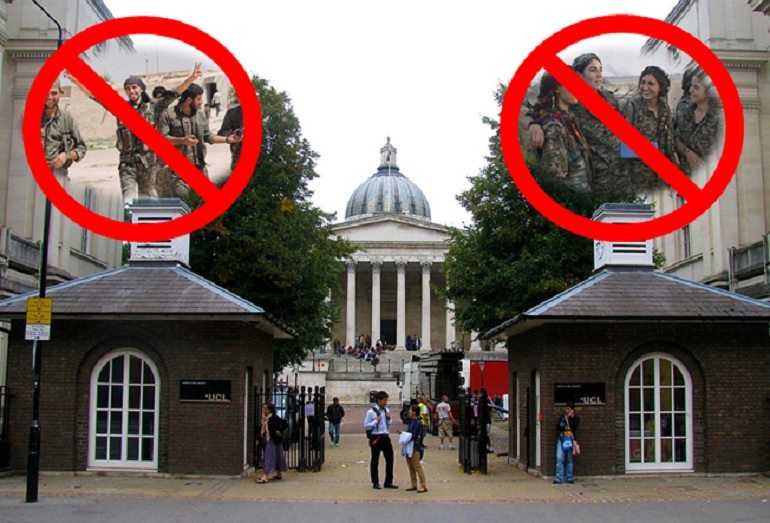 On 3 November, University College London Union (UCLU) made a very questionable decision. And this decision has cast doubt on the organisation’s commitment to freedom of speech and independent debate.

The university’s Kurdish Society had invited former student Macer Gifford to speak about his experience fighting against Daesh (or ISIS) alongside the progressive and largely-Kurdish YPG/YPJ militias in Rojava. However, this speech never took place.

The reason? The UCLU claimed it wanted to:

UCLU Activities and Events Officer Asad Khan apparently told Kurdish Society President Kavar Kurda that Gifford would not be allowed to speak because:

Khan also questioned the human rights record of the YPG/YPJ, which are linked ideologically to the prominent Democratic Union Party (PYD), though for Kavar the UCLU officer seemed to have:

gone out to find anything remotely negative against the group

The human rights reality is that the YPG/YPJ signed three “deeds of commitment” in 2014 with Swiss-based NGO Geneva Call, pledging to:

ban anti-personnel mines, work against gender discrimination and sexual violence and not use children under the age of 18 to fight in its ranks

And for Geneva Call’s Anki Sjoeberg, the militias had “proven a willingness to implement” their pledges and abide by international laws.

At the same time, Human Rights Watch (HRW) spoke about having a “favorable experience” of the militias, with the organisation’s Emma Sinclair-Webb claiming to have been “encouraged by their response” after concerns about rights abuses had been raised.

Do criticisms of the YPG/YPJ have any legitimacy?

In October 2015, Amnesty International (AI) published a report highlighting allegations of forced civilian displacement during the YPG/YPJ’s expanding offensive against Daesh. Such actions, the organisation said, would amount to a violation of international law if true.

In response, Macer Gifford wrote to AI secretary general Salil Shetty, saying he was “utterly bemused”. Having been at the sites mentioned in the report in person, he said:

I have never seen any evidence of deliberate property damage or forced evictions.

Gifford also explained that, when civilians had indeed been asked to leave conflict zones, this had been done “with their safety in mind” and that, once the areas were secure again, civilians had been allowed back. On some occasions, the YPG/YPJ had needed to fortify people’s properties and use them to defend territory from Daesh, but:

There was never a deliberate policy to damage property.

my commander would often share our supplies with locals from the nearby Arab villages.

At best, he said, the AI report had been based on “unreliable witness testimony” from civilians who had misinterpreted the evacuations. At worse, however, he suggested that these reports could be:

a deliberate attempt to discredit the YPG/YPJ

The most worrying thing, he affirmed, was that the report was now being used by Turkish nationalists and religious fundamentalists to debilitate the YPG/YPJ’s “excellent relationship with the Arab communities in Rojava” and foster increasing sectarianism in the region. And YPG general commander Sipan Hemo agreed, insisting that the timing and wording of the AI report was “suspicious”.

At a time when we are forming a new alliance with Syrian pro-democracy forces, and getting ready to wage a big war against ISIS, this report is released… Hard to think it is all a matter of coincidence.

For LSE professor David Graeber, Amnesty had clearly abandoned objectivity for political purposes, and someone had to be held responsible:

@blefuscuan @amnesty tho I'd also like to see an internal investigation of how this happened, apology, & firing anyone who committed abuses

Although the YPG officially stated that the report had “failed to convey the reality”, it made it clear once again to Amnesty and the wider world that:

the YPG and its affiliates, whose members firmly believe in ethnic and religious diversity…, would never tolerate or condone violations or abuses [which] might be carried out by its fighters, regardless of their position or rank.

Instead of relying on third party testimonies, why don’t you come to Rojava to meet some of the people fighting on the frontline? …The Kurds have been open and transparent with all international organisations… As part of your investigation, do go to Rojava and see for yourself the excellent work that people are doing

Instead of looking into the YPG/YPJ’s record in more detail, however, Asad Khan and the UCL opted to “stay on the side of caution”, even though Khan himself noted that:

[The] YPG aren’t a terrorist organisation

UK anti-terror legislation places pressure on universities to avoid booking controversial speakers or to provide balance if a controversial figure is booked – which supposedly would require a Daesh supporter to be allowed to speak in this case in order to balance out Macer Gifford’s anti-Daesh stance. In short, the UCL may have just been trying to avoid government scrutiny.

However, it seems that there may have been political bias at play regarding the situation in question. Khan, for example, was backed by the Islamic Society during his election campaign for the UCLU post, and was also accused of fraud during this process. These facts may place into doubt both his objectivity regarding the secular revolution of Rojava and his own personal integrity. At the same time, the UCL has been criticised before for its soft approach towards religious extremism.

According to Calvin Law at The Tab, the institution has now stumbled once again, failing to realise that:

Elsewhere in the media, Green party international coordinator Derek Wall called the UCLU’s decision regarding Gifford’s speech “appalling”, but stressed that it represented the official government position on the battle between the Rojava-led coalition and Daesh:

If you can’t ‘take sides’ in a conflict like that, then your moral compass is in serious need of repair.

Accusing Khan and his colleagues of “acting like PR men for Isis”, he suggested that the act of censorship had been:

designed to protect the Islamic State… both from criticism (the conflict is ‘far too complex to understand in black and white’, said Khan) and from attack (the talk could lead to ‘others going and fighting in the conflict’)

Reclaiming the battleground of ideas

There is no doubt that universities have played an incredibly important role in shaping processes of social change throughout history. And they very much should be at the forefront of the battle of ideas today – opening students’ eyes to a wide range of information and encouraging them to discuss the realities around them using reason and evidence. In the fight to defeat the toxic Wahhabi ideology at the heart of Daesh, this process is absolutely essential.

Universities are key ideological battlegrounds, but in order to progress towards a world of peace and justice, we need them to flourish with independent and innovative thought. Therefore, what has just happened at UCL is not just a student matter. It’s a matter for all of us.

If you disagree with the UCLU decision regarding Macer Gifford, please write to Asad Khan and sign this petition.