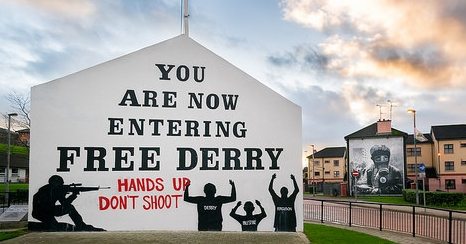 A British former paratrooper, who was present at the ‘Bloody Sunday’ Massacre in Derry, on 30 January 1972, has today been detained by police in Northern Ireland in connection with the atrocity. Detective Chief Inspector Ian Harrison of the Police Service of Northern Ireland, said that the arrest marks “a new phase in the overall investigation [into the shootings] which would continue for some time”. It has taken almost 44 years for the first arrest relating to Bloody Sunday to happen.

The shootings, which took the lives of thirteen people on the day, with a fourteenth victim dying later, were a response by the British Army to a peaceful protest march by nationalists, who were opposed to the then-government’s draconian policy of internment, sometimes referred to as ‘Operation Demetrius’. During the march, a series of tense confrontations between protesters and British paratroopers eventually broke out into violence, with the soldiers opening fire on the crowds.

In the aftermath of the massacre, there were tides and counter-tides of mutual recrimination between the protesters and the paratroopers. Soldiers claimed to have been fired upon by protesters, while protesters countered, probably incorrectly, that no one on the march had been armed. An inquiry into the atrocity, conducted by Lord John Widgery, eventually concluded that the first shots were ‘directed at the soldiers’. Widgery criticised the Army for gunfire that ‘bordered on the reckless’, but ultimately insisted that the blame for the shootings lay with the people who had organised the march. The report was seen by many, especially among nationalists and republicans across Ireland, as a whitewash, deeply angering and hurting relatives of the victims, and proved a powerful recruiting tool for paramilitary groups set against the British occupation of Ulster for much of the next 20 years.

It was not until early in 1998 that the British government finally agreed to re-investigate the massacre, when Prime Minister Tony Blair, criticising the Widgery Report as being too rushed, launched what became known as ‘The Saville Inquiry’ – an investigation conducted by Lord Mark Saville. It was one of the longest and most comprehensive investigations in British legal history; where Widgery had taken less than 12 weeks, Saville took over 12 years to assess every last scrap of evidence and eye-witness account he could find, and when he finally published his report in June 2010, it was unequivocal in its findings. According to Saville (Volume 1, Chapter 5.4 & 5.5):

The firing by soldiers of 1 PARA [1st Battalion, The Parachute Regiment] on Bloody Sunday caused the deaths of 13 people and injury to a similar number, none of whom was posing a threat of causing death or serious injury. What happened on Bloody Sunday strengthened the Provisional IRA, increased nationalist resentment and hostility towards the Army and exacerbated the violent conflict of the years that followed. Bloody Sunday was a tragedy for the bereaved and the wounded, and a catastrophe for the people of Northern Ireland.

The paratroopers were found to be overwhelmingly to blame for the shootings, and the protesters were more or less completely exonerated.

Until today, none of the soldiers involved in the atrocity have been disciplined, let alone arrested, and several of the commanders behind the Army operation were actually decorated by the Queen. The fact that it has taken five years just since the Saville Report for a single arrest to be made – let alone nearly 44 years since the massacre itself – perhaps betrays a certain reluctance on the part of the British police to open the metaphorical ‘can-of-worms’ any further. One possible reason for that is that there seems to be an ambivalent outlook in the media.

It must be recalled, as the Irish Times noted despairingly at the time, that the response of many in the British press to the Saville Report was somewhat withering. The right wing press in particular, while offering grudging acknowledgement that the British paratroopers’ behaviour had been completely unacceptable, seemed to insist that nothing should be done about it, that it was time to draw a line under the story, and time to ‘move on’. It was as though they thought that finally getting straight what really happened in 1972 is enough to constitute ‘justice’. Writing in the Daily Mail, Max Hastings resorted to a familiar right wing cheap trick, by using a lazy stereotype to portray the wronged as being somehow ill-deserving of justice:

no nation on Earth possesses a talent for promoting its grievances to match that of the Irish … it would be rash to anticipate much Irish goodwill or gratitude for [the report]. Republicans do not do goodwill.

Apparently, Hastings thinks that acknowledging a crime not only acquits the British, but actually requires that the victims of the crime say thank you for it.

Comparing the ambivalent media response to the Saville Report with, for instance, the media response to the Report of the Hillsborough Independent Panel a couple of years later – in which there was rightly almost universal sympathy for the victims – raises an uncomfortable question; was the attitude less sympathetic over Bloody Sunday because the victims and campaigners were Irish, and not English? Is prejudice the defining attitude? Does the colonial oppressor of 800 years still subconsciously view the Irish people as being ‘less important’ than their occupiers? That would explain why the outrage in the media after the Saville Report was comparatively slight, why, accordingly, the momentum of the campaign for justice has also been slight, and hence why it has taken another five years just to see one arrest.

That first arrest had been delayed too long already; the man arrested today, who remains unidentified at the time of writing, would have been around 23 at the time of the atrocity, and is now heading into his late-60’s. Assuming his guilt, even if he were imprisoned tomorrow, he would still have had nearly half-a-century of unobstructed freedom beforehand, and so it is very plausible to argue that he has already managed to get away with it.

That is an injustice in itself.