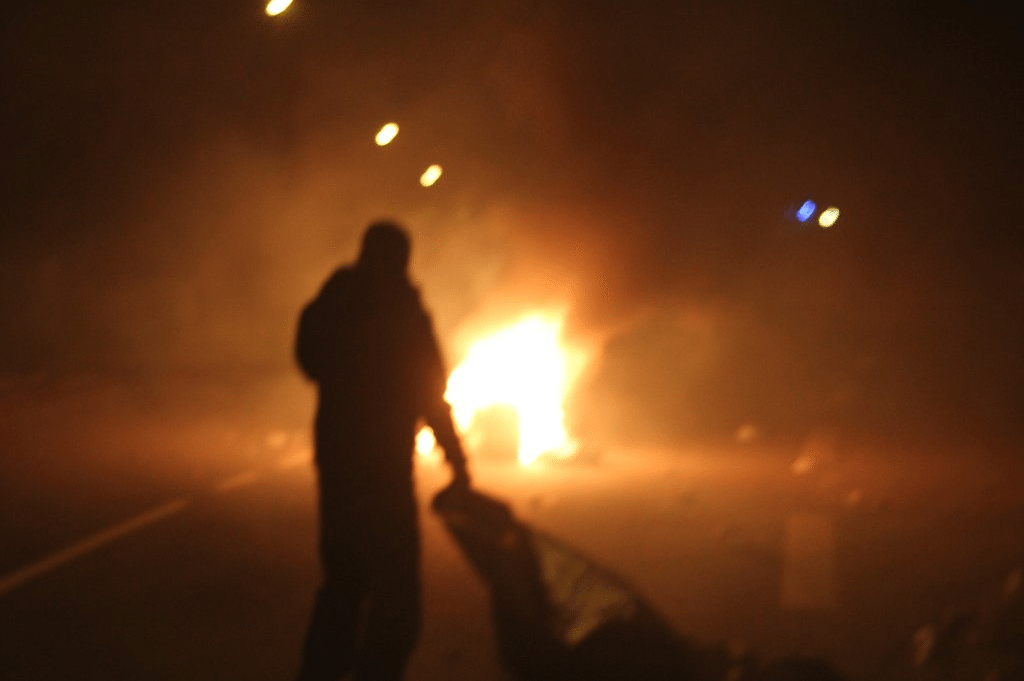 For the third night in a row, Calais police have attacked refugees in the ‘jungle’ with tear gas.

Tensions escalated on 10 November when police used unprecedented force against refugees in the camp, including rubber bullets, a water cannon, and lethal concussion grenades. What began as a refugee protest on the highway, with refugees chanting “no more jungle”, quickly turned into a night of collective punishment by police. As one blogger wrote:

This was a clear message from the police, if you protest we will punish all of you.

The Twitter account, Calais Solidarity, posted live updates from Calais all through the night, where police retaliation against protesting refugees became more and more violent as the night went on.

HAPPENING NOW: For the 3rd night in a row, #Calais police attack #refugees staying in the jungle with tear gas.

Police now entering the #calais jungle on foot supported by their water canon. A total of 56 gas rounds fired.

4 #refugees arrested and 4 being treated by a medic at #Calais jungle entrance.

@BBCNews I'll go and report this for you, expenses only. You seem to be short staffed. https://t.co/0e284MPD6t

Sorry to bother you @guardian @BBCBreaking @itvnews but do you think you could possibly report the news in #Calais 😳 https://t.co/YlTshMCmSN

A group of refugees were protesting their living conditions on the highway, but the police indiscriminately punished the inhabitants of the refugee camp, adding insult to injury. The jungle is a ramshackle slum that is “not even fit for animals“, in the words of one refugee. The precarious conditions in the camp have already caused fires to spread multiple times, but the reaction of the authorities has been heavy-handed for several weeks now.

Although the French government has so far resisted calls from the Mayor of Calais for military intervention, this escalation in police violence marks a disturbing shift in approach to the refugee camps.

This is the biggest refugee crisis since World War II, and the European leadership is completely at odds over what to do. As winter sets in, governments will have to make very difficult decisions, and it seems France has chosen a reactionary approach over a progressive one – but violent repression cannot offer any way out of this crisis; it will only make this dreadful situation much, much worse.