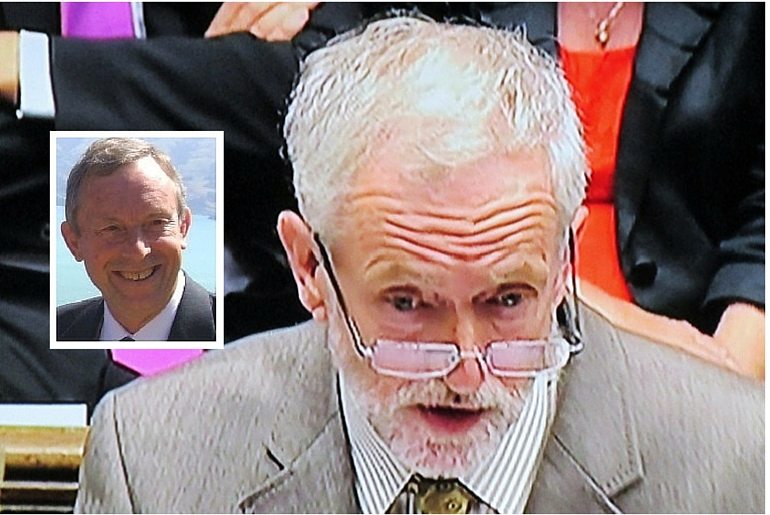 Robert Green, an ex-commander who served in the Royal Navy, has publicly announced his support for Jeremy Corbyn’s anti-Trident stance. Green, who has first-hand experience of nuclear weapons, lays out in powerful detail the reasons why Corbyn’s position is “honourable” and “legally and strategically correct”, in an article written for The Ecologist.

Green’s approval comes after a controversial assessment of Corbyn’s views by Sir Nicholas Houghton, the current head of the UK armed forces, on the Andrew Marr show on 8 November 2015. As has been highly publicised, Jeremy Corbyn previously said that he would not push the nuclear button, which is likely a welcome admittance to anyone who values their existence. Not for Houghton, however, who commented that:

It would worry me if that thought was translated into power … because the whole thing about deterrents rests on the credibility of its use.

As for this macho ritual ‘nuclear test’ of British political leadership, the reality is that no Prime Minister would have to ‘press the button’. That dirty work is delegated to the Commanding Officer of the deployed Trident submarine.

This “dreadful” and “suicidal” responsibility, he goes on to say, leaves these personnel at danger of being held accountable for war crimes. This is a serious possibility, because the International Criminal Court holds nuclear weapon use to the same standards as armed conflict – namely abiding by humanitarian law. Green lays out in stark terms what this means in a nuclear context:

The envisaged use of even a single 100 kiloton UK Trident warhead could never meet these requirements.

Of course, the argument for being willing to press the destruct button – whoever that responsibility lies with – is usually, as Houghton suggests, that it validates the deterrent. Green dismisses this theory outright, describing it as a “disingenuous doctrine” which is “militarily irrational”. As a bombardier-navigator, who flew in Buccaneer nuclear strike aircraft with a target in Russia, he provides an example why:

Soviet archives show that NATO’s conventional capability and soft power were seen as far more significant than its nuclear posture.

In light of the turmoil that occurred in the region last year, partly due to the possibility of a NATO presence in Ukraine, this theory seems to hold true.

In the article, Green also questions the notion that Trident provides an ‘independent British deterrent’, when in reality the system has come to,

depend upon a US-leased missile system, US software in the fire control system, US targeting data and satellite communications.

Also, the argument that Trident will protect the UK against threats from other nuclear nations falls apart when we look at the vast differences in nuclear reserves:

A major reason Corbyn would like to forego the renewal of Trident, is to fulfill the UK’s obligations under Article 6 of the Nuclear Non-Proliferation Treaty (NPT). In this agreement the UK has committed to get rid of it’s arsenal, and the expiration of Trident would be the perfect opportunity. Opting to renew would send a dangerous message to other nations, as Green suggests here:

For the 184 states which have made a treaty commitment to renounce nuclear weapons, the UK’s moral authority is compromised by its nuclear posture.

In its commitment to the renewal of Trident, the Conservative government is sending a damaging message to its own citizens. With a price tag in excess of 100 billion, Trident proves austerity is a choice, not a necessity. Their religion of austerity defies it’s orthodoxy. Corbyn’s desire to spend those funds on things like the NHS, trying to nurture life rather than annihilate it,  is ultimately better for the UK.

This endorsement by Robert Green gives the public a real chance to understand the arguments Corbyn has been making. Here stands someone who has extensive military experience of nuclear weapons and thinks they fail on all counts. Green warns that, thus far, “nuclear war was avoided by luck”. Now will we listen?