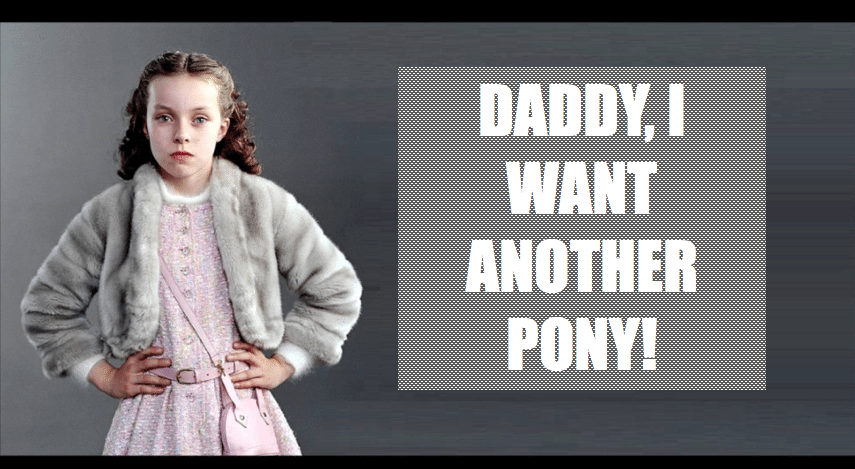 Christmas is fast approaching, and for many families, this will be a tough winter. For many kids across the country, and the world, shelter and warmth will top their Christmas list. That’s what makes the story you’re about to hear just a little bit sickening.

Earlier today, we came across this staggering report of a billionaire father buying his 7-year-old daughter a ring worth nearly $50 million. As The Guardian reports:

A Hong Kong billionaire spent a record $48.4m buying an 12.03-carat diamond dubbed “Blue Moon” for his seven-year-old daughter in an auction in Geneva.

Property tycoon Joseph Lau bought the rock at a Sotheby’s auction on Wednesday and immediately renamed it “Blue Moon of Josephine” after his daughter.

It struck us as completely crazy. But it had us reflect back on our own society and think: what would the ‘Christmas List’ of the West’s super rich kids look like?  Turn out, it looks something like this.

1. The Most Expensive Barbie Doll In The World

Toymaker Mattel asked Australian jewelry designer Stefano Canturi to design the most expensive Barbie doll ever. So he came up with this, at a price of $302,000. And yes, those are real diamonds.

A dummy, a pacifier, a num-num – that rubber teet you give a baby to suck on. How about slapping a bunch of diamonds on it and charging $50k a pop? It happened.  Apparently this idea was “Inspired by William & Kates Royal Baby.”

3. A Rucksack Made Of Gold

The perfect item with which to carry their other ridiculously overpriced Christmas gifts around in. There are only four of this design in the world, and at a billionaire bargain basement price of just $1,650, totally doable.

And if Mummy and Daddy fail to spring for this list of luxurious gifts, there’s always…

4. Toilet Paper Made Of Gold

She can always wipe away the tears of disappointment with tissue paper made of gold. A roll costs only $1.3 million (Australian $1.37.)

The latest study by Oxfam revealed that the world’s richest 85 people hold as much wealth between them as the poorest 3.5 billion.

While it is estimated that it would cost just $30bn a year to end world hunger – our 85 richest people continue to blow their $1 trillion on the kind of absurd indulgences that could be sacrificed without issue.  Seriously, if you’ve reached the point where you’ll sit by, merrily wiping your ass with gold toilet paper, while 8 million people a year are dying because they’re too poor to live – what is the point of you?