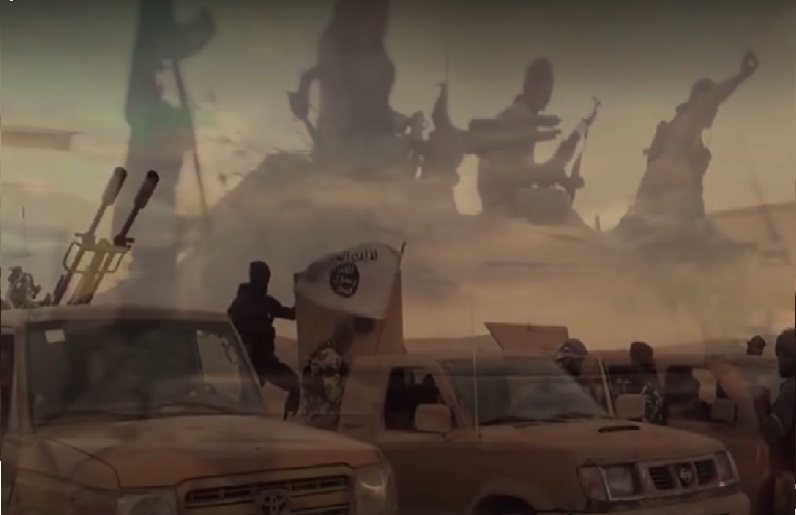 Who exactly is funding Isis (Daesh), and enabling them to carry out their vicious attacks? Recent revelations suggest their contributors are many, with some too close to home for comfort. In light of these claims, it is entirely possible that tax payers’ money invested by the UK government in its international dealings, such as with NATO, foreign countries, and support for Syrian rebels, is landing in Daesh’s lap.

In a press conference following the G20 summit, Vladimir Putin claimed that he shared intelligence at the meeting which implicates 40 countries – including G20 nations – in the financing of Daesh. This is an explosive revelation, which could have a huge impact on curtailing the reach of the terrorist group, but it barely lifted an eyebrow in the western hemisphere.

Responding to a question from a reporter on what counter-terrorism measures were brought up at the summit, Putin acknowledged that they had discussed the importance of stemming the flow of money to Daesh. He continued:

I gave examples based on our information about individuals financing various Islamic State subgroups in different countries. We have established that financing is coming from 40 countries, including G20 countries. We discussed this issue.

Unfortunately, our mainstream media doesn’t seem to think that a discussion about this issue is important.

Admittedly, it has been reported that wealthy donors in a few countries – Saudi Arabia, Kuwait, and Qatar – are known to have funded Daesh, but that still leaves thirty seven unknown countries from which funds are flowing to the terror group. That’s a substantial number of governments which could restrict financial aid to Daesh.

Putin goes on to describe the less direct avenues for Daesh’s income stream, such as the “unlawful trade in objects of art after terrorists pillage museums in the territories they seize”, and the “unlawful sale of oil and petroleum products”. Addressing how the Russian government is aware of the oil revenue in particular, Putin states:

I also showed our colleagues satellite images and aerial photographs that show very clearly the scale of this illegal trade in oil and petroleum products. You see columns of refuelling vehicles stretching for dozens of kilometres in lines so long that from a height of 4,000–5,000 metres they vanish over the horizon.

So put simply, Daesh supposedly has lots of oil and Russia knows where it is.

Intelligence of this kind is like gold dust, and could be invaluable in determining how to relieve Daesh of income. Then why the stony western silence?

It seems that part of the problem lies in facing the thorny possibility that NATO nations may be involved in the funding. Since Putin’s pronouncement, a jaw-dropping report by Nafeez Ahmed has been published by Insurge Intelligence, a crowd-funded investigative journalism project, in which alleged dealings between Daesh and the current Turkish government are detailed.

A member of both the G20 and NATO, Turkey should be firmly anchored to the western camp in the fight against terrorism. According to the report, however, while Turkey has been publicly condemning Daesh, forces in the country have been privately supporting it, along with other jihadi groups in Syria. Referencing an article in Turkish daily Today’s Zaman, the report claims factions within Turkey have provided fake passports for Daesh, “turned a blind eye” when militants cross the border into Syria, and treated fighters in their hospitals.

And that’s not the half of it. The report continues:

According to other ISIS suspects facing trial in Turkey, the Turkish national military intelligence organization (MIT) had begun smuggling arms, including NATO weapons, to jihadist groups in Syria as early as 2011.

This accusation was apparently then corroborated by a prosecutor and the testimony of Turkish police officers, the article claims. Add to that the funding supplied to rebels in Syria by the west which has “enabled prolific weapons transfers from ‘moderate’ to Islamist militants”. The situation you end up with – according to German journalist Jurgen Todenhofer, who spent 10 days with Daesh in 2014 – is as follows:

They buy the weapons that we give to the Free Syrian Army, so they get Western weapons – they get French weapons … I saw German weapons, I saw American weapons.

The report also identifies another major role Turkey may have played in increasing Daesh’s wealth:

Turkey has also played a key role in facilitating the life-blood of ISIS’ expansion: black market oil sales. Senior political and intelligence sources in Turkey and Iraq confirm that Turkish authorities have actively facilitated ISIS oil sales through the country.

These claims need to be investigated, and if proven, acted upon. Allied nations should be held to account, and they must cease their support for Daesh entirely. That’s what it takes to maintain an alliance. And the current Turkish regime, which has focused on fighting anti-Daesh Kurds rather than Daesh itself in recent months, is right at the top of the list of countries that needs to be brought into line.

However, as Putin stated, Russia has identified financing for Daesh orginating from 40 countries. So why are we not clamouring to find out about the others?

Putin himself hints at a possible answer. Responding to a question about western criticism of Russia hitting targets in Syria that are not Daesh, he says:

You know, I don’t want to sneer at this. Strangely enough, they have their own reasons for it. And one of them, I will tell you point blank, is that they are afraid to give us a list of territories not to strike, because they fear that this is exactly where we will strike, that we will deceive them. It seems they judge us based on their own notions of decency.

This last remark may appear a little like point scoring, but before Putin descended into fighting talk he said that trust was the problem. Anyone who has been following international relations over the last few years will not be surprised by that admission.

The question now is: will we let mistrust get in the way of fathoming ways to combat this “barbaric terrorist organisation”, as Obama has described Daesh? Of course, Russia’s assertions need to be properly validated but, if they are true, acting on them could seriously debilitate these Wahhabi extremists.

David Cameron, it seems, remains hell-bent on air strikes in Syria. How this will solve the problem, when Syria is already the target of bombing campaigns from numerous countries, defies logic. In the Labour ranks, meanwhile, there is support for targeting the funds that sustain Daesh.

On Wednesday, during PMQs, Jeremy Corbyn asked the following question of David Cameron:

Surely a crucial way to help defeat ISIL is to cut off its funding, its supply of arms, and its trade. Can I press the Prime Minister to ensure that our allies in the region, indeed all countries in the region, are doing all they can to clamp down on individuals and institutions in their countries who are providing ISIL with vital infrastructure. Will he, through the European Union and other forums if necessary, consider sanctions against those banks and companies and, if necessary, countries who turn a blind eye to financial dealings with ISIL which assists them in their work?

Cameron responded that “we do play a leading role in making sure that the supply of money, and weapons, and support is cut off”, and proceeded to suggest that Daesh is getting its support mainly from resources it has seized within Iraq and Syria. And indeed, it is raking in a fair amount of cash from taxes and trade in the areas it controls. However, its goods are being bought by someone and, as the Insurge Intelligence report suggests, we have some ideas already as to who these people are. If Putin can identify more, surely we should listen.

In order to counter Daesh, many avenues need to be explored. First, there needs to be a recognition of all the factors that led to the group’s creation. Then, there needs to be support for the ideological alternative and resistance of progressive forces in Rojava. But cutting off Daesh’s access to trade and funds would also contribute significantly to disarming the group. At the very least, it would be a much more intelligent tactic than just relentlessly bombing Syria. War is, after all, meant to be a last resort. Let us remember that.