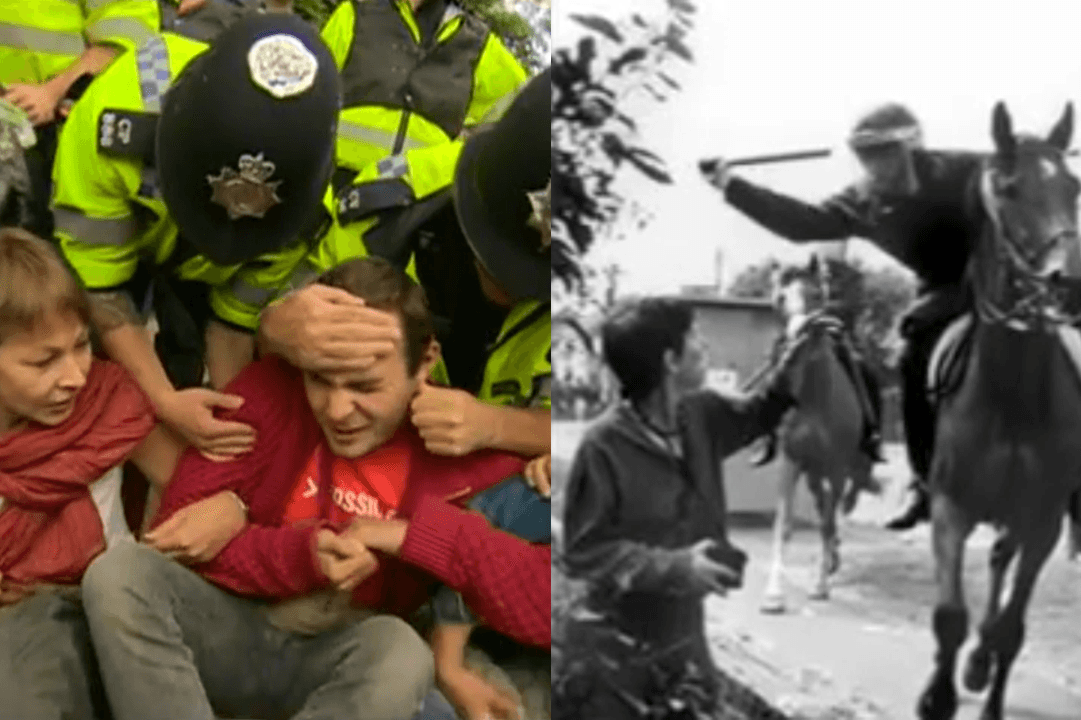 David Cameron seems determined to push ahead with fracking, come what may. If his plans are disrupted by massive popular resistance, will Cameron crack down hard on campaigners in the same way as Margaret Thatcher treated the miners?

On Wednesday the government succeeded in passing a piece of legislation that paves the way for the extraction of shale gas from underneath National Parks. This apparent u-turn, and the rather dubious way it was put to a vote with no parliamentary debate, has also struck a jarring note, coming as it does so soon after the climate talks in Paris.

David Cameron gave up pretending to be ‘green’ long ago and is now pedalling hard in the opposite direction. The Tories seem determined to ditch renewables in favour of vastly expensive nuclear power and unpopular shale gas. On Thursday (the last day of parliamentary business before Christmas and obscured by a snowstorm of potentially contentious announcements) the government announced the award of 159 licenses for onshore oil and gas exploration. Given that we really need to be keeping fossil fuels in the ground to have any chance of hitting the Paris climate targets, launching a prospecting boom is ecological insanity.

But the likes of Cameron and Osborne, and their frack-happy friends and relatives, may not have it all their own way. In an article on the BBC website, business reporter Richard Anderson details a number of factors which could slow down the fracking bandwagon, or even halt it in its tracks. The regulatory framework, the planning applications and the logistical and technical demands all combine to mean that no actual shale gas extraction is likely before around 2020. However, Professor Paul Stevens of think tank Chatham House tells the BBC that public opposition may well be the deciding factor. Public distrust of the fracking process, combined with anger at the high-handed way the government is overruling local planning decisions, is likely, he believes, to lead to “serious civil disorder”.

We’re not talking Orgreave incident [levels], but not far off. The vehemence felt is so strong it would be virtually impossible to carry out sensible operations.

Professor Stevens foresees a situation where fracking companies decide it is impossible to continue and “to all intents and purposes, the shale gas revolution is dead”. Such a prophecy may chill the bones of gas executives, and lift the spirits of community campaigners, but the invocation of Orgreave is potentially a double-edged sword.

The ‘Battle of Orgreave’ was a defining moment during the miners’ strike of 1984-85. A substantial mobilisation of workers and secondary (‘flying’) pickets sought to close down a strategically important coking plant, and were met by a vast and heavily-tooled police presence. The exact course of events has always been the subject of differing opinions – even this week Home Secretary, Theresa May, received a demand for an independent inquiry. What is beyond doubt is that mounted police charged the crowds and chased people across fields and down streets. Riot police tactics such as kettling and snatch squads were used for the first time in mainland UK. There were over 90 arrests and more than 120 miners and police were injured. The events opened a rift between mining communities and the police, and Thatcher was able to use the violent images to fuel her propaganda that the striking miners represented a grave threat to Britain.

Anderson’s article makes the most of the Orgreave mention, using three photographs to drive the point home. Does this mean we can expect to see anti-fracking protestors vilified and misrepresented by the media, and labelled ‘the enemy within’ by a Prime Minister seeking his ‘Thatcher moment’? Will there be a steady media campaign to discredit anyone opposed to fracking?

What is striking in comparing the two scenarios separated by 30 years is that the police seem just as prepared to use force, even violence, now as they were then. The two images above both show situations in which the police’s determination to keep an industrial operation moving appears to have veered into senseless sadism.

On the left, the son of Green MP Caroline Lucas is being subjected to a painful pressure hold behind his ear, supposedly to elicit compliance and enable police to clear the road. The court case, at which Lucas was found not guilty of any wrong-doing, was told that no people or vehicles had actually been obstructed by the protest.

On the right, there is no way in which the mounted officer could be said to be acting proportionately towards Lesley Boulton. Far from blockading Orgreave coking plant, Boulton was seeking medical assistance for an injured man she’d found by the roadside. This image, which has become iconic over the decades, was only featured in one of the 17 national newspapers at the time, an omission almost certainly made deliberately.

So will we be able to hear the voices against fracking? Well, Caroline Lucas has done her best. The Nanas, a headscarf and tabard wearing group of women, are tailor-made for reporters seeking a story. Campaigns are frequently driven by the local community, who nowadays have ample means to publicise their own message. For anyone who wants to find it, the information is out there.

But, as we learn from the miners’ strike, when the government is desperate to get its way, it can call on an impressive arsenal of police muscle, media manipulation, and the coercive power of surveillance. Recent times have seen worrying developments in terms of free speech and the criminalisation of protest. As the Tories get ever more frantic in their lust for fracking, it will be important for everybody who wants to talk sensibly about energy security, climate change, and the many practical considerations raised by this technology, to watch out for media manipulation and political policing – and challenge them at all times.

And David Cameron might do well to remember that although Thatcher ‘won’ the miners’ strike, she lost the support of swathes of the population to such an extent that feelings were still raw when she died years later. Does he really want that kind of legacy the length and breadth of the country, wherever he tries to frack?