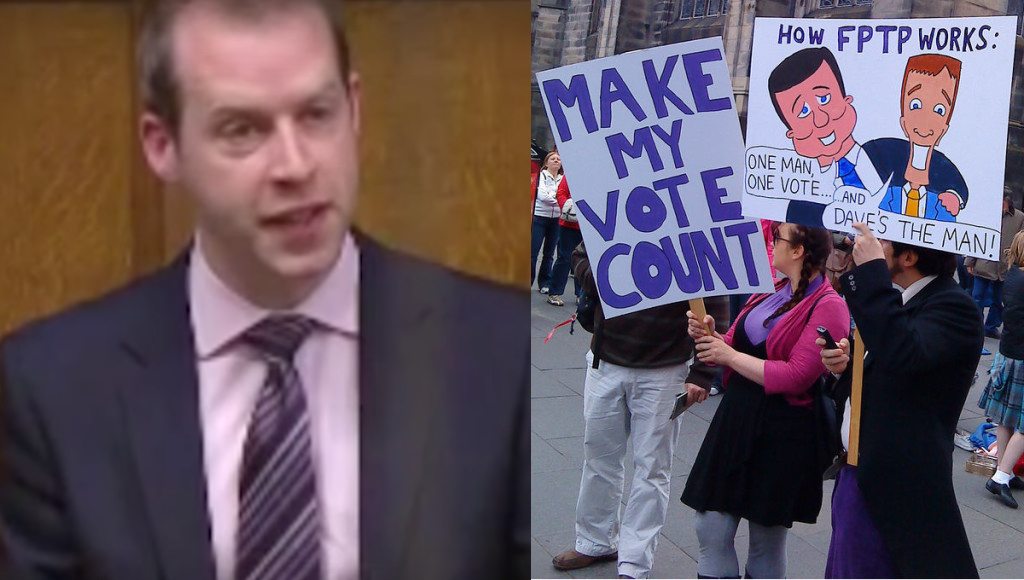 It was described as the most disproportionate election result in history, with millions of votes disregarded from the final result. Yet, despite a widespread appetite for electoral reform following the 2015 general election, MPs have snubbed another chance to make British democracy fairer and more representative for everyone.

On 16 December, MPs were given their first opportunity in years to discuss how we reform the inherently undemocratic First Past The Post (FPTP) electoral system. However, The Representation of the People (Proportional Representation) bill, put forward by Jonathan Reynolds MP, was resoundingly rejected.

The bill proposed the adoption of the Additional Member System (AMS), an electoral system whereby each voter selects a local MP – in the style of FPTP – but gives the overall result proportionality by topping up the seats won by each party from a list of regional candidates also chosen by the electorate.

Just 26 MPs from six parties voted in favour of the bill – a travesty, but hardly surprising.

Historically, both Labour and the Conservative party have reaped the rewards of an electoral system that most agree is disproportionately rigged in their favour. As votes cast for losing candidates are discarded, the majority of the votes under FPTP have no impact, creating a two-party system in which swing seats hold the balance of power.

The most pertinent example of FPTP’s disproportionality was UKIP, who won just one seat in parliament despite receiving more than 3.8 million votes – a whopping 12.6 percent share of the overall vote. Even those most vehemently opposed to UKIP’s toxic brand of free-market nationalism will agree that the vote resulted in a glaring injustice too jarring for the Westminster elite to simply ignore.

From tactical voting to wasted votes for losing candidates, the arguments against FPTP have been laid bare by the Electoral Reform Society and many MPs who believe there’s cross-party support for embracing a more proportional system.

It is said that in 1830, the Duke of Wellington as Prime Minister declared himself opposed to any reform of parliament on the basis that the state of the representation of the people had been designed by providence,

said Jonathan Reynolds, who proposed the bill in the House of Commons on behalf of 6,000 people who wrote to their MPs, 500,000 people who signed petitions since May, and the millions whose voices were ignored under FPTP at this year’s general election.

Therefore, he said, it cannot be improved. And he was of course deeply wrong, because two years later, the great reform act 1832 was passed.

Electoral reform, as illustrated by this tub-thumbing anecdote, has been and can be enacted. But, as Reynolds argued in his ten-minute rule motion, the attitude that the means of representing the people at Westminster cannot be improved upon is one that has lived on and remains strong today.

As an authoritative poll from pollsters BMG found earlier this year, this widespread resistance to change goes against the will of the electorate. The scientifically weighted survey revealed that 57 percent of the public supports the idea of a proportional electoral system, while 51 per cent of the population said they were “unhappy with the current electoral system and want it to change”.

The mandate for change is unequivocal, but in rejecting Reynolds’ Proportional Representation bill, the will among MPs appears at odds with the groundswell of public support for reform.

Owen Winter, a teenager who launched a petition calling on David Cameron to make Britain’s voting system fair and representative, understands the consequences of this indifference better than most. Where the majority of Britain’s Generation Z feel disenfranchised from politics, Owen has made it his mission to put voting reform back on the agenda.

If we are to succeed in changing our system, we need to make sure that politicians know exactly what we want – reform!

he wrote in an update on his petition, which has more than 237,000 signatures at the time of writing.

Although the next general election is not until 2020, the stakes for failing to reform our narrow and unrepresentative electoral system before the next vote could not be higher. With the Tories looking to further entrench their hold on power by redrawing the constituency boundaries, an unrepresentative two-party system could soon become an unrepresentative one-party state. If – as is possible under FPTP – the party with the highest share of the vote doesn’t win the most seats, the result could spark a constitutional crisis, undermining the fundamental tenets on which our democracy was founded.

For the time being, David Cameron will do everything in his power to clutch onto his party’s loosely-held mandate, but FPTP is no longer fit for purpose in a modern democracy and, as the hand-wringing electorate are starting to realise, nor are the politicians who defend it.