Names of undercover police revealed, this scandal is worse than we thought (EXCLUSIVE) - The Canary 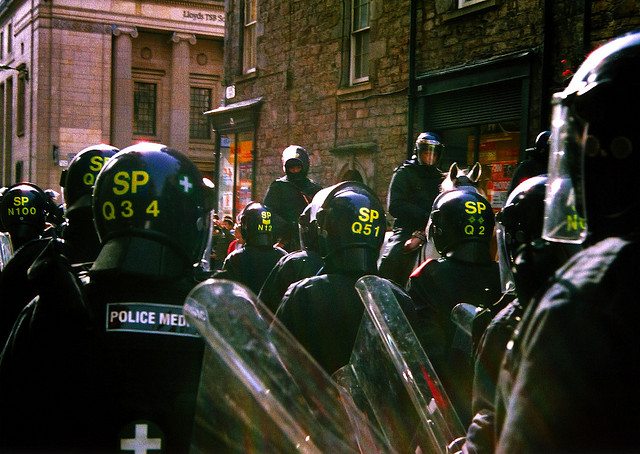 Two undercover police officers were arrested in Scotland whilst posing as protesters during the G8 summit protests in 2005.

The officers, who were part of the notorious Special Demonstration Squad (SDS) which infiltrated protest and social justice movements between 1968 and 2008, were among at least 5 undercover officers who went to Scotland to infiltrate the demonstrations.

The first of these officers, has been named by the Network for Police Monitoring as Jason Bishop. Bishop was involved in spying on anti-capitalist and anti-militarist protests between 2000 and 2005. He travelled to the protests with his flatmate, Dave Evans, who is alleged to have been another undercover officer, known for his involvement in animal rights protests.

They were arrested in July 2005, along with 9 others who were in a minibus during a massive Scottish police operation, against those they believed were responsible for organising protests during the summit. In fact, it was Evans who was driving the bus.

A first-hand view of the G8 protests

I was among those arrested that day. We had left Glasgow in the early evening, intending to travel to Stirling where there was a large camp for protesters. After having been on the road for about ten minutes, we were suddenly aware of lots of police activity, leading one of those in the van to joke about what was happening now we were leaving Glasgow.

However, the intensive operation was designed entirely to shackle us. Our minibus was stopped by several police vans. A helicopter hovered overhead, and fully kitted riot police ran out, surrounding the van and slamming their shields into the windows. Other riot police with dogs barking stood in front.

We were charged with conspiracy to breach the peace, and told we were being prosecuted at the highest level possible in Scotland – at the High Court of Justiciary where there are unlimited sentencing powers, and which is normally reserved for serious crimes such as murder and rape.

After a night in the cells, we were taken to court where we told by our solicitors it was very unlikely we would get bail, and we would probably be remanded in custody. Friends who attended court to support us reported a “massive police presence inside and out”, with 30 officers in the court lobby and a further 16 in the actual court room.

Yet, late afternoon, we were all suddenly released without appearing in court, with no explanation given. Whilst it is speculation, there has to be a reason why such a huge policing operation was so suddenly aborted. A plausible explanation is given by former undercover officer turned whistleblower Pete Black in Paul Lewis and Rob Evans book – Undercover: The True Story of Britain’s Secret Police. Black stated:

if there was any chance of the SDS officer going to prison, they would not go.

He further added “I know of cases that were pulled because the SDS officer would have been charged with something serious”.

These fresh allegations will add to the growing calls for a public inquiry into undercover policing north of the border. Currently, undercover policing in England and Wales is subject to a public inquiry that is due to fully get underway in 2016. However, the scope of this inquiry is limited, and does not include operations undertaken by English officers in Scotland, Ireland or Europe.

Activist Jason Kirkpatrick, who has been granted core participant status for the English inquiry, has been campaigning for the inquiry to either include Scotland, or for there to be a separate Scottish inquiry into undercover policing. Kirkpatrick had extensive contact with the National Public Order Intelligence Unit (NPOIU) officer Mark Kennedy during the G8. In particular, Kirkpatrick alleges Kennedy may have interfered with the media work he was doing. He stated:

I suspect that Mark Kennedy and police agencies he was connected to may have organised to interfere with my sending of press releases.

Furthermore, Kennedy is alleged to have had a sexual relationship with an American activist during the G8 protests. She is another person who is concerned that her experiences in Scotland will not be admissible within the current terms of the public inquiry. In an interview with The Herald, she claimed:

I am living proof that Mark operated in Scotland – why was he allowed to sleep with a US citizen during a spy operation in Scotland? People in the UK have a right to know why he was allowed to operate in Scotland and what information he gathered there.

Other undercover officers at the G8

Two further undercover officers have been identified as operating during the G8. Several activist sources have confirmed Mark Jacobs, who was very prominent in organising resistance to the G8, was present, and the only female undercover officer, Lynn Watson, is also said to have been there.

This brings the total of known infiltrators from the SDS and NPOIU attending the protests to five. Furthermore, there are allegations that Germany sent five additional undercover officers to the demonstrations.

Even before these revelations became public, questions were raised by Members of the Scottish Parliament about the policing of the summit, where there were 350 arrests. MSP Carolyn Leckie questioned the conduct of English officers:

The conduct of the police must be examined, in particular the role of forces that came from outside Scotland who appeared to act in a completely uncontrolled manner on a number of occasions.

Whether it is to investigate intimate relationships, interference with press work, or getting arrested, it is plain that either the current inquiry into undercover policing needs to be expanded to include their activities in Scotland, or that a separate inquiry north of the border needs to be launched. This is now the view of the Scottish government, and Justice Secretary, Michael Matheson, has asked Theresa May to include Scotland in the inquiry.

Abuse of powers by British police

For too long these officers have acted with impunity – from long-term intimate relationships and having children with activists, to spying on grieving families. It has been a long, gruelling fight just to get a public inquiry, and it is now essential that this inquiry is as robust and thorough as possible. This has to include investigating wherever and whenever these officers operated. Whether or not they were on English soil is irrelevant when they were supposedly under the control of an English police force.

Furthermore, it is essential that the inquiry demands the police reveal the names of the spies who have operated against activist groups who were merely exercising their democratic rights. Until this is done, hundreds of people may not even know that they were ever targeted, or that their privacy was violated, and so will not be given a voice.

This inquiry must not be allowed to become another whitewash; all undercover officers must be included, and all their activities must be examined.