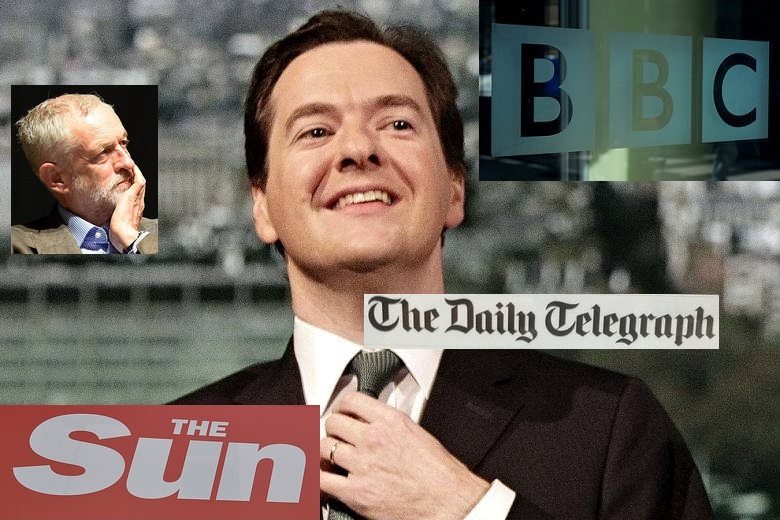 George Osborne’s diary was packed full on the weekend Jeremy Corbyn was announced Labour leader, largely with media moguls who control the nation’s narrative. Osborne dined with the BBC on the eve of the leadership vote, with Rupert Murdoch the day after, and with Aidan Barclay of The Telegraph at the start of Corbyn’s first week in office.

The details of Osborne’s engagements were released on the last day of parliament, when the government is apt to sneak out news it wishes to fall under the radar. There were a whopping 400 releases on 17 December.

However, the volume of meetings here, and their timing in relation to Corbyn’s election should raise questions. Specifically, did the wining and dining with Osborne have any impact on their coverage of Corbyn?

The reporting in Corbyn’s first week as leader has been analysed by the Media Reform Coalition. According to their findings:

the press set out to systematically undermine Jeremy Corbyn during his first week as Labour Leader with a barrage of overwhelmingly negative coverage.

Astonishing, when looking specifically at news stories – as opposed to editorials and comment pieces – they found that:

A mere 6% of stories classed as news (19 out of 292) were positive, versus 61% negative stories and 32% taking a neutral stance. Any notion of simply ‘reporting the facts’ in straight coverage of breaking events appears to have had a restraining effect on positive stories only

This analysis specifically investigates newspaper reporting, but the broadcast media has also come under fire for its coverage of Corbyn. Amusingly, the ‘impartial’ BBC even had to cover their own bias after an outcry over their reporting on him.

This uproar was partly due to the BBC’s focus on some of Corbyn’s trivial supposed transgressions, such as not singing the national anthem, and their explicit bias in dealing with his position on important matters. In an interview with the BBC regarding his views on Trident, as an article by Media Lens notes:

Whether the coverage of Corbyn was linked to these companies meeting with Osborne is hard to substantiate. Indeed, such anti-Corbyn sentiments, on the man and his opinions, may be held by the organisations themselves, merely coinciding with the views of the Conservative government. And they are allowed an opinion, although to present that opinion as unbiased fact is misleading, and a great disservice to the public.

It is also detrimental that these media outlets inform so much of the public discourse. News Corp UK and the Daily Mail group control nearly 60% of the national newspaper circulation. The BBC is one of the most popular news sources in the UK.

Allowing media outlets with such obvious leanings to have too much influence in framing the debate on Corbyn is damaging, not only to him but also the electorate. This is why there is a call for media reform, to limit to the ownership of media, and allow more varied viewpoints in the public arena.

These reforms should be embraced. That way, Osborne could have as many meetings, and meals, with the media as he likes, without the public being limited to the menus, and agendas, they set.