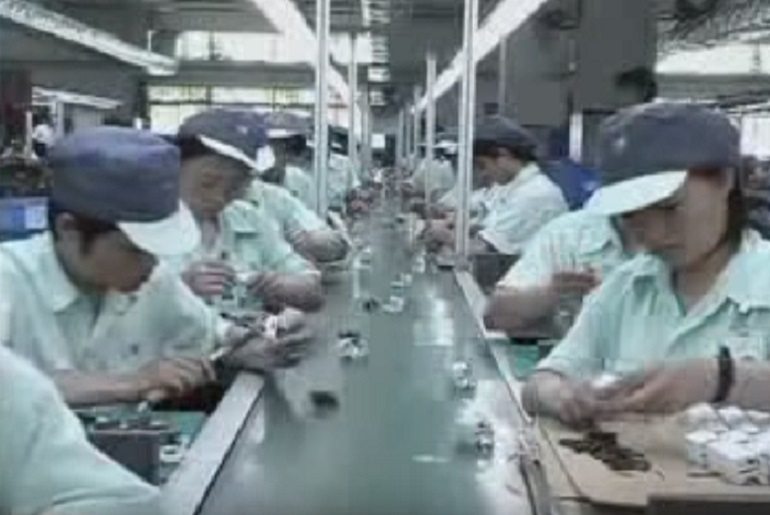 How nice that we have the tale of Santa’s elves to tell our children and ourselves at Christmas. The truth is, modern slavery and abominable working conditions in factories are enough to make anyone cry. However conscientiously we make our purchases the rest of the year, it’s easy to let it slide over Christmas. Slogging through the rain and crush looking for last minute presents, and cursing our pledge to go Amazon free, cheap tat feels like a solution. But, if not blood, there’s sweat and tears on those labels.

Christmas lead-times – the gap between orders and finished product – put manufacturers under pressure. Overtime is usually compulsory. One documentary recorded the hours worked in a Chinese factory as running from 6.30am to midnight, with overtime until 2 – 4 am. Once done, workers are usually bussed back to crowded dormitories, where there may be mould on the walls and bedbugs in everything. The fatigue means more accidents in factories that are already under-equipped with safety equipment. Essentials like goggles, masks and hearing protection are frequently unavailable. Fire exits may be optional too. The manufacturing of plastic goods, Christmas decorations, and electronics involves highly toxic chemicals, and little is done to protect workers.

Child labour is technically illegal in China, but it still happens. Officials check for child workers, but it is done in such a way that companies may only get a slapped wrist, and nothing is done to prevent the trafficking of children. In one case where some of the trafficked workers were under ten years old, no arrests appear to have been made.

Unions don’t fare so well either. Though workers are beginning to organise and protest a little more, this is often met with violence. One group gave up on state support after their employer closed down without giving them severance pay, and travelled to Hong Kong instead. They staged a protest outside Disneyland.

Many companies do their best to put governance measures in place. Such measures might include filling in a questionnaire about whether you’re willing to work standing up or do overtime. Failure to give the required answers simply means you’re not hired. Other evasion methods include parallel bookkeeping, where one set of accounts shows workers being paid a reasonable wage, but the ‘real’ set of pay slips will tell a different story. Panorama exposed conditions in factories producing Apple products by sending in undercover workers. This seems to be the only way to get to the bottom of what working in a Chinese factory is like and businesses, keen to keep their costs down, are unwilling to go that far. Instead, they warn factories when inspectors are coming and live with the risk the bad PR that child labour and factory deaths generate.

The problem is not local to China and the Far East. Chocolate production is innately linked to child slavery on the Ivory Coast, and even children working on tobacco farms in the US. The entire supply chain is infected with slavery as these dockworkers in the US testified.

People are attempting to confront the problem. Australian mining magnate, Andrew Forrest, was involved in founding The Global Fund to End Slavery, and he also supports The Freedom Fund, along with eBay millionaire, Pierre Omidyar. Australia, the UK and the US have all made efforts to make bonded labour illegal. Companies shamed in the Rana Plaza disaster, where a commercial building containing a garment factory collapsed due to structural deficiencies, have been called to account by exposes and social media campaigns. Some companies are also using responsible supply chain activities to boost their images, and industry specific organisations – aimed at improving labour rights – are cropping up.

Great move by @CAH: they bought out factory capacity to give Chinese workers a week off. https://t.co/OKlAQiwMI0 pic.twitter.com/nO3R78SgHR

While the reality for most adult factory workers is likely to remain grim, there are people working to give the children back their lives.

Lunch with school kids in Barpeta! Good to see children rescued from child labour also going back to schools! pic.twitter.com/pnJvndZEmn

European consumers do care about the ‘blood on their labels’. They showed this in demanding compensation for the dead and maimed of the Rana Plaza collapse. But, with tight budgets and very little time to get all those Christmas gifts, it’s easy to forget. Donating to an organisation that protects children and adult labourers could be the best gift you can give. And there’s no need to face the weather or the crowds!