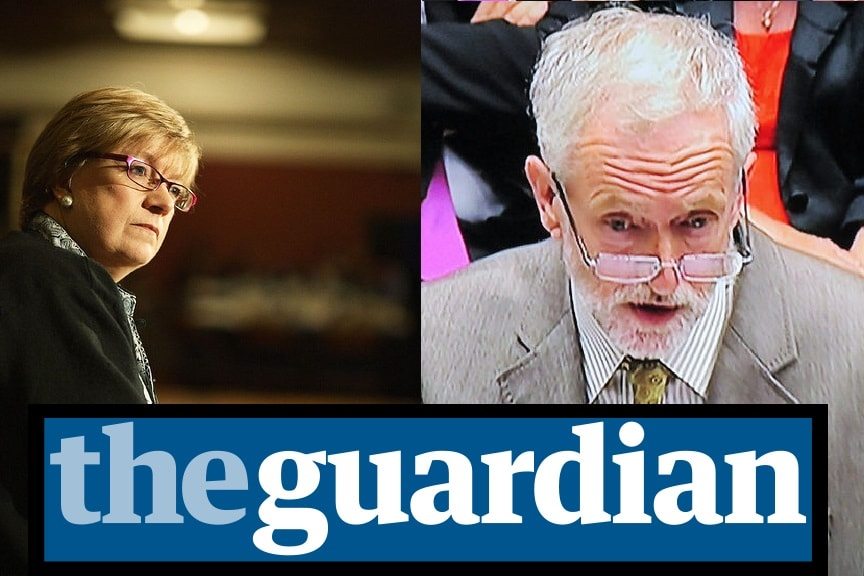 Polly Toynbee’s latest Guardian piece entitled ‘Labour people are optimists, but this time I see no hope’ contains a gaping hole. Here, she repeats the well rehearsed argument that Jeremy Corbyn is ‘unelectable’, patronising Corbyn supporters as “believing in Father Christmas” for thinking he can win the election.

Ironically, this gaping hole is articulated within the piece itself.

After the Corbyn bashing, Toynbee turns her cross-hairs to those who oppose him, criticising a “social democratic breakaway”.

Trident renewal is no rallying cry. Anti-anti-austerity is not a good look. Public sector “reform” is a dead duck, with the sector hewn down.

Toynbee is correct here, and shoots herself in the foot.

These are very good reasons why there will not be a split in the Labour party. The blairites have neither the ideas, nor the backbone. However, the comments also describe the Labour party under the administration of the other leadership hopefuls. Despite not all being the same gender, Yvette Cooper, Andy Burnham and Liz Kendall were hard to tell apart. These candidates represent the side of Labour Toynbee appears to be defending.

If Toynbee has lost hope under Corbyn, what hope is there under the leadership of those with “no rallying cry”?

The leadership of an invertebrate with watered down Tory spending plans did not go well in the 2015 election. Whereas a coherent anti-austerity message from the SNP annihilated Labour in Scotland. Being a real opposition is the path to victory, not being so indistinguishable from the Tories that people accidentally vote Labour in 2020.

Toynbee chastises Corbyn for distracting the party “from the serious job of opposition”. Apparently it’s Corbyn, not people within the parliamentary Labour party opposing his leadership (instead of opposing the Tories), who is the problem.

Only 24% of the electorate voted Conservative in 2015. While Toynbee sensationalises this as a “massacre” (whose side is she on again?), it was a very slim majority. Why would we concentrate on the quarter of the country that voted Conservative, and not focus on the other 76%?

In the 94 English seats Labour must win, four out of five new votes need to come from Tory voters.

Not sure how Toynbee calculated this one; we only had 66% voter turn out. Pandering to Tory voters is not only difficult, but also how Labour will lose their core support and grassroots momentum. Tapping into the disillusioned is where victory lies, not capitulating to the Tory narrative.

In just 100 days of leadership Corbyn won a landslide by-election, initiated a membership surge of over 60,000, brought participatory democracy into Westminster with crowdsourced PMQs and enjoyed a significant victory on tax credits cuts.

While it is doom and gloom from commentators like Toynbee, Guardian readers have overwhelmingly recognised the first 100 days of Corbyn’s leadership as a success, and criticised the Guardian for its negative coverage. The view professed by the media elites stands in contrast to the readers.

Yet, even with this positive start, forecasting victory in 2020 would be a bit of a stretch. It would, however, be a useful one, energising people to look forward positively. What is both a stretch and not useful is predicting defeat after just the first 100 days, as Toynbee has done.

In Road to Wigan Pier, Orwell attacks middle class leftists who call for change UNTIL there's a danger it might actually happen@Guardian??

The Guardian’s brand of Corbyn bashing is less blatant than the Sun’s or the Telegraph’s, but it is perhaps more damaging. Toynbee must have gazed into her crystal ball to be so sure of defeat, so soon. The demoralising is all the more insidious for being packaged with sympathy.

Toynbee gushed over Tony Blair, yet attacks Corbyn at every possibility, even parroting claims he’s a terrorist sympathiser. This latest attack furthers my suspicion she is an establishment shill.