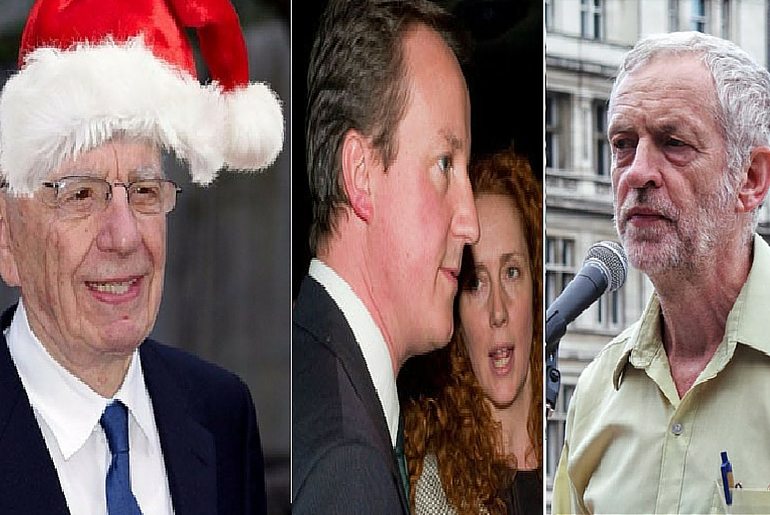 Half the Tory cabinet has attended Rupert Murdoch’s Christmas party, showing where the real power in the UK lies.

Murdoch was disgraced after his paper, the News of the World, was found to be hacking people’s phones including that of a murdered schoolgirl. But Murdoch and his family have increased their income significantly – having more than doubled their wealth since the phone-hacking scandal came to light. And now it appears he is back as powerful as ever, throwing a party at his flat that the prime minister, chancellor and culture secretary (whose job it is to regulate the media) all attended.

The prime minister, David Cameron, has close links with many in the Murdoch empire. He was a close friend of Rebekah Brooks (now working as a senior executive in Murdoch’s firm). Cameron frequently attended dinner with Brooks and was texting her a week after The Sun switched its support from Labour to the Conservative party. She even said after his speech at the Conservative conference:

Brilliant speech. I cried twice. Will love ‘working together’.

Also, Cameron sent supportive messages to Brooks when she was tried alongside Andy Coulson, Cameron’s former press officer, who was found guilty of one charge of conspiracy to hack voicemails. Brooks was not convicted.

Murdoch has close ties with a number of those in Cameron’s inner circle, including George Osborne, who may have been drowning his sorrows at Murdoch’s party after the latest figures have shown the UK’s national debt is rising, despite his rhetoric that Britain is paying down its debt.

Murdoch was angry with Cameron after he set up the Leveson Inquiry. It appears all is now forgiven as the Leveson Inquiry led to, well, not very much being done to the disgraced media. But sadly, it won’t be much of a surprise that those who are meant to hold politicians to account have such a close relationship with them.

News UK, the media group Murdoch owns, met government officials 10 times between April 2014 and March 2015. It is no surprise the secretary of state for culture, John Whittingdale, refused to disclose this information. A day before Jeremy Corbyn was voted as Labour leader, Osborne had met, wined and dined with the BBC. Following Corbyn’s election, Osborne met a certain Rupert Murdoch, and he also met Aidan Barclay of The Telegraph at the start of Corbyn’s first week in office. Cameron has also had meetings with editors of Murdoch’s papers The Times and The Sun, as well as meeting Lord Rothermere, who owns the Daily Mail, and Evgeny Lebedev, who owns the Independent and the Evening Standard.

Corbyn’s call to shake things up

The Media Reform Coalition have reported that the national newspaper market is owned by a handful of companies. Their report said:

Just two companies, Rupert Murdoch’s News Corp UK and Lord Rothermere’s Daily Mail Group, control nearly 60% of national newspaper circulation. If you include online and mobile readers, the situation isn’t that much better with five companies accounting for 80% of all consumption, online and offline.

This has led to Jeremy Corbyn calling for a change in the media. Corbyn has been on the receiving end of the hostile press. Just last week the Sun had to issue a front-page apology after the Independent Press Standards Organisation (Ipso) deemed their story, accusing Corbyn of joining the Privy Council purely to secure state funding for his party, as being a misleading claim. However, the front-page apology was tiny and further reading on page 2 was uninteresting and made no mention of Corbyn.

Another example of the hostile media is the DMGT-owned Metro. The Metro claimed that because Corbyn gave Labour MPs a free vote, he was to blame for Britain being involved in another Middle Eastern conflict despite the fact he strongly opposed the war and it was Cameron who put the vote before parliament.

Corbyn has asserted that:

the media’s attitude towards the Labour party and our campaign has been horrendous.

It’s because we are doing a different form of politics, which is a mass movement of ordinary people for the first time getting involved in politics.

We are developing a media policy which would be about breaking up single ownership of too many sources of information, so that we have a multiplicity of sources. And actually promoting co-operative ownership and access, including local TV and radio stations and newspapers like the Morning Star.

It would be wrong to come to a conclusion on this policy considering it hasn’t been developed yet. However, it is the duty of the media to hold those in power to account. As such, it is a worrying situation where half the cabinet is invited to the flat of the most influential man in the media. This signifies where power really lies.

We need a diverse media to ensure a functioning democracy. In 2016, The Canary will play a growing role in this task.