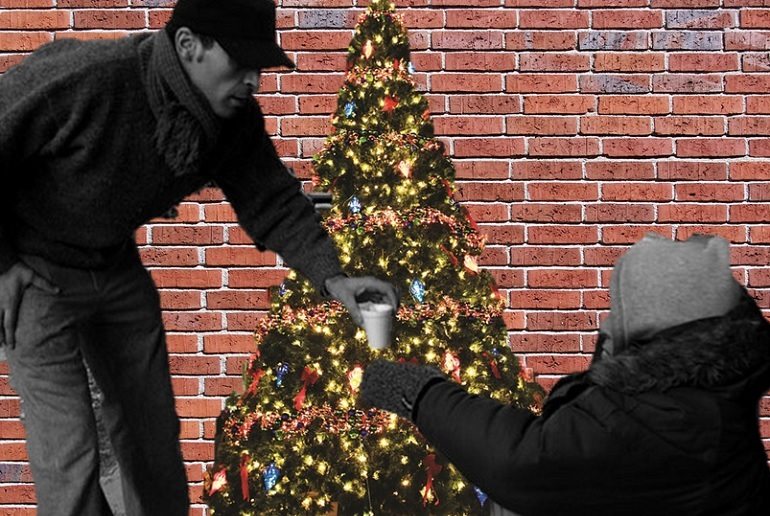 Internet search engines tell us that Christmas is a season of giving, goodwill, and forgiveness. But for vulnerable citizens living in desperate conditions, it isn’t any different from the rest of the year. Fortunately, there are people who seek to embody the seasonal values of love and hope by reaching out to their marginalised neighbours.

Recently, the BBC explains, hooks and hangers have appeared on a number of walls, with a message written beside them saying:

The idea is that people passing by will see the message and leave old coats, trousers, and other items of clothing for homeless people to take. And the hope is that this gesture will be a vital lifeline for society’s most vulnerable during the coldest part of the year.

Dubbed ‘walls of kindness’ on social media, this citizen’s initiative is a much needed act of humanity in an environment of economic injustice and rising homelessness.

In fact, fridges have also appeared on city streets, giving people the opportunity to leave food for the homeless to eat.

The only thing is that all of this has not happened in the UK, but in Iran.

With official figures suggesting that around 15,000 Iranians are homeless, and some reports saying this is the number for Tehran alone, the humanitarian initiatives described above have spread quickly across the country. And thousands of Iranians on social networks have helped to fuel this process. 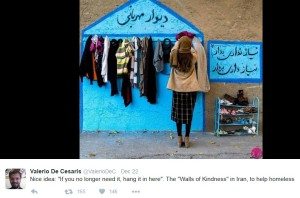 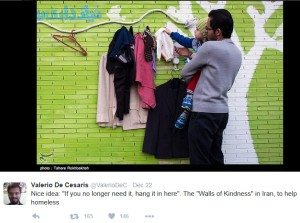 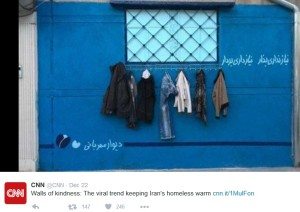 In England, the number of homeless families with children who are living in emergency B&Bs has hit a 12-year high of 3,000 households, up by 45% from September 2014 according to the Department for Communities and Local Government (DCLG). This figure, The Guardian reminds us, highlights how difficult local councils are finding it to house homeless families in a country where social housing or affordable private accommodation are sorely lacking.

The Conservative government, in spite of agreeing to end homelessness by 2030, has overseen a significant growth in homeless applications since it came to power in 2010. Homeless Link show how there were thousands more homeless applications in 2015 than in 2010. And this is no surprise given that the Tories’ housing programme includes building ‘starter’ homes which – with a required income of £59,000 (compared to the average UK wage of £26,500) – are simply unaffordable for the majority of citizens. And while social-rented homes give “the greatest social and financial return”, according to former housing association CEO Tom Murtha, the government is continuing to subsidise such home ownership initiatives.

In other words, the current government is doing next to nothing to remedy the shortage of affordable housing, with only half as many of the houses needed being built between March 2014 and March 2015.

Iran’s walls of kindess would be very welcome in today’s Britain, though they would only really put a plaster over a gaping wound. The only way to heal this wound permanently would be to officially recognise that providing homes for all citizens is not only beneficial to society economically but also the right thing to do morally. And by way of a seasonal justification for this argument, let’s look at what angels apparently exclaimed to a group of shepherds upon the birth of Jesus:

Peace on earth and loving mercy towards all people!

With this in mind, if you hear anyone linking Tory policies to values like love and generosity this Christmas or even claiming them to be good Christian acts, please remind them of the desperation present on British streets that has only increased under Conservative rule. And let’s insist – not only at Christmas but on each day of the year – that all human beings deserve dignity, peace, and justice.