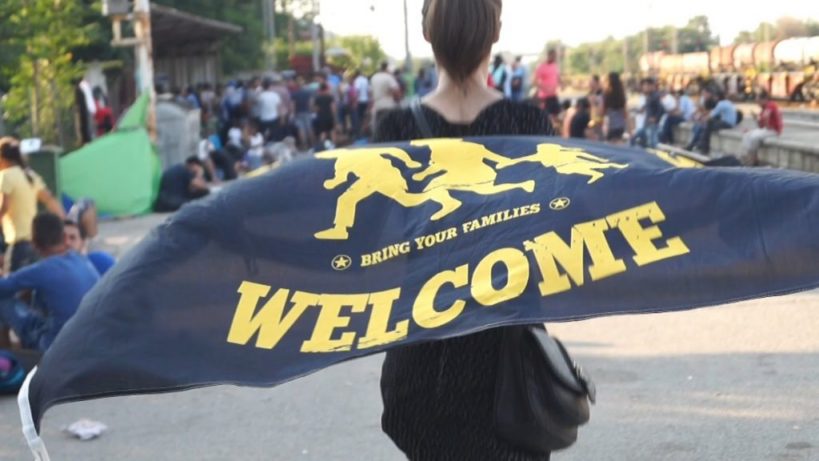 For Dr Jan Oberg, director of the Transnational Institute for Peace and Future Research (TFF), the Swedish government’s decision to end freedom of movement across the Oresund bridge, was the straw that broke the camel’s back.

The 7.8 km bridge, which connects Denmark to Sweden, has been the main route of entry for refugees seeking to enter the country. But now the government has decided to overturn 50 years of free movement by implementing border ID checks, turning away many asylum seekers and causing huge delays for the 30,000 who commute from country to country each day.

For Oberg, it is a source of outrage and sign that things must change. In an interview with Russia Today, he condemned the decision which goes back on decades of humanitarian policies. He also damned the role of the Swedish arms industry in stoking the conflicts that caused refugees to flee their homes, and then put his cards on the table, saying:

We need to have a revolution.

It’s not every year that kicks off with calls for revolution on live television, so in a Canary exclusive we contacted Doctor Oberg to ask if he had anything more to add. Here is his response:

I mean a revolution, at least in Europe – of conscience and humanity. An uproar against governments’ militarism that has created this crisis and the same countries that are turning the victims of their policies away. I mean a revolution where we understand that civil society can do things while governments can’t.

Since the exodus from conflict zones such as Syria, Eritrea, Libya and Afghanistan exploded into the European consciousness last year, incredible outpourings of generosity from host nations have been witnessed. But often this humanity has come from the ground-up rather than the top-down.

Where governments lacked efficacy and resources, ordinary people stepped in to distribute food, clothing, provide accommodation, transport and healthcare, providing relief in a crisis which could have been a lot worse.

I find it heart-warming that millions of people stand up and protest, build refugee opportunities, universities etc – but very sad that there is no EU leadership, and no will to look beyond nationalism and carry the costs together.

In September, minimum refugee quotas were proposed by the European Commission. This aims to ensure that no country has to accommodate more refugees than it can support, and to foster the sense that each of the 28 countries of the union are doing their part to aid the crises.

However, quotas have been fiercely resisted and, in some cases, completely ignored.

Per-Arne Andersson, a senior official at the Swedish Association of Local and Municipal Governments, the problem is not that Sweden on the whole is ‘full’, he states:

Denmark has reacted angrily to Sweden’s move and is now stepping up its own controls at the German border. They fear that the refugees turned back from Sweden will end up staying in Denmark.

This has the potential to carry on, in a domino effect where each country retaliates with its own set of border restrictions until the Schengen system is ground to dust. Michael Randropp, a spokesman for the Kystbanen commuters’ association said:

It’s as if we are building a Berlin Wall here. We are going several steps back in time.

It is clear that we are now going to see one of two Europes. Either the fear and lack of co-operation will prevail and freedom of movement across the EU will end, with all the economic and social consequences that entails. Or the same people who have welcomed refugees with open arms will make their voices heard. For the sake of the European legacy, and the thousands of refugees in need of sanctuary, let’s hope it’s the latter.