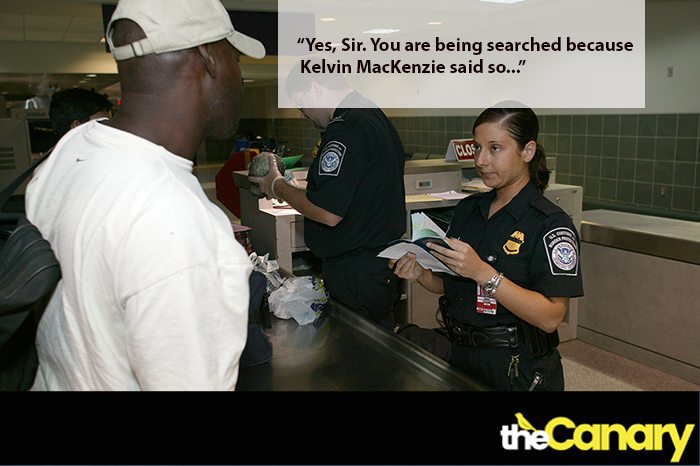 The Sun’s controversial columnist and former editor, Kelvin Mackenzie, argues that airport security should not screen white men because only Muslims are terrorists.

Mackenzie, perhaps most well known for his role in The Sun’s slander of victims of the Hillsborough tragedy, made the comments following a flight from Dubai airport. He suggested that the security should know that “Muslims, men from the Middle East or Africa mainly” were the most likely individuals to carry a bomb onto an aircraft. MacKenzie went on to say that because of his age and the colour of his skin, he should be excused from the random routine screening carried out by security staff around the world.

Aside from the fact that MacKenzie’s comments incite racial hatred, the breathtaking ignorance of his comments belie the fact that the media’s darling of fear, the so-called White Widow (Samantha Lewthwaite), was, as her nickname suggests, a white female who The Mirror claims is responsible for the deaths of up to 400 people.

Samantha Lewthwaite was not from the Middle East or Africa. She was born in Northern Ireland and raised in Aylesbury. The claim that white men should be beyond security screening also forgets recent history, namely the actions of the IRA, who were predominantly white men and certainly not Muslims.

What Mackenzie appears willfully ignorant of is that terrorists are made, not born. The colour of someone’s skin and their country of origin has no bearing on their actions, or the moral principles which they abide by.

This is not the first time The Sun has run an article calling for ‘a bit of racism’ to deal with airport queues, and the  Daily Mail  has also run an article that claimed white people were targeted for screening to avoid accusations of racism from ethnic minorities, who were allegedly the real targets.

Jeremy Clarkson once blamed “bleeding heart liberals” for the failure of the border control officials to target ‘high risk’ passengers over fears of being labelled racist. Racial profiling has become systemic within society with minority groups paying the price. They are being targeted and marginalised for the failings of our foreign policy which has created the world of terror we now live in.

For these views to be considered mainstream and published on a regular basis, without challenge, is of concern. We are sleepwalking into a society we once taught children we should avoid, and promised to never forget about. It was a world that we thought belonged to the past, a past filled with pogroms, genocide, and open racism. Yet the same propaganda campaigns are being made against Muslims today and with little in the way of resistance. Attacks on Muslims are on the rise and articles like the one produced by MacKenzie only serve to fuel ignorance and fear.

We need to challenge the failed foreign policies of governments,  which create new militants every time a school or hospital is bombed. We need to realise that Kelvin Mackenzie is not just a bad apple, but part of system wide problem where prejudice has become acceptable towards one group of people. This gigantic step backwards is not making us safer, but is precisely what is fuelling the biggest conflict we face today.