As the UK bombs Syria, this NATO member is murdering Kurds - Canary 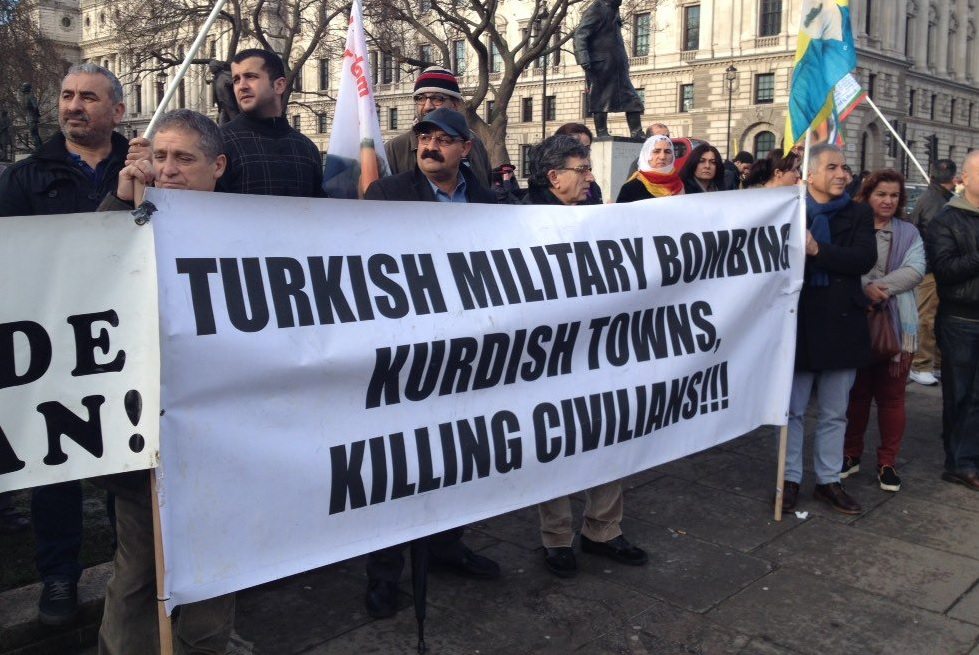 On 5 January, a group of Kurdish activists occupied Conservative party HQ in London. The reason?

UK bombs may now be falling on Syria, but the North Atlantic Treaty Organization (NATO) still has no unified plan for democracy or peace in the Middle East. While the airstrikes of the alliance’s biggest army are helping Kurdish-led forces in their fight against Daesh (Isis/Isil), for example, its second biggest army is waging war against the very same Kurdish-led forces.

After the US army, the Turkish armed forces are the biggest in NATO. Yet they are currently acting not alongside their allies but against them. While Ankara promised in 2015 to join the US-led air campaign against Daesh, the reality is that it has instead launched a campaign against an old enemy. According to one US military source:

Turkey wanted to move against the PKK, but it needed a hook

That hook turned out to be a pretend war against Daesh.

The PKK (Kurdistan Workers’ Party) is a group which fought against the repression of Kurdish communities in Turkey for decades, but has advocated peace negotiations for much of the early twenty-first century. In recent years, the PKK and its allies have also proven themselves to be among the most effective fighting forces in the battle against Daesh.

Why is Turkey attacking Kurdish communities?

A peace process between Ankara and the PKK finally began in late 2012, but was broken off in mid-2015 by the Turkish government after the ruling AKP failed to win a majority at general elections. In his desire to attract nationalist votes for a rerun of the elections, President Recep Tayyip Erdoğan, launched a military campaign against the PKK.

Erdoğan’s regime had shown no real interest in fighting Daesh, and links between the two have been well documented. At the same time, the successes of the progressive Kurdish-led forces of the YPG/YPJ in northern Syria (or Rojava) since 2012 have given Ankara’s elites cause for concern. The secular, feminist, and directly democratic revolution in Rojava was inspired by the political ideology of the PKK. The Turkish government worried that the PKK itself would become more and more popular in Kurdish parts of Turkey as a result of Rojava’s example. In fact, Ankara’s hostility to Rojava was one of the reasons the AKP lost support in the 2015 elections.

Now, as the YPG/YPJ-led Syrian Democratic Forces (SDF) advance on the remaining Daesh-controlled territory on the Turkish border with Syria, Erdoğan and co are desperately trying to stop the progressive spirit of Rojava taking hold in Turkey. With rebel groups previously supported by Turkey and the west in Syria now coming under attack from the SDF, the tables have turned in Syria, leaving the Turkish regime to try and exert its authority at home through violent repression.

But Turkey has not only blockaded Rojava and waged war against the PKK. Since July 2015, the Turkish state has essentially been attacking Kurds in the south-east of Turkey as punishment for not voting for the ruling party in June’s elections and asserting their right to have their democratic voices heard.

Another reason for the state’s assault on Kurdish communities in Turkey, says The Pasewan’s Ozkan Kocakaya, is that:

State level corruption and human rights violations are at their worst…, the economy is worsening, relations with neighbours are at their lowest and fascism rules the parliament

Ethnic oppression is the number one government strategy

In November 2015, human rights lawyer Tahir Elçi became yet another civilian victim of the Turkish state’s war on its opponents and, on 2 January, another opposition politician was arrested. This has now become the norm. According to human rights lawyer Margaret Owen, Erdoğan’s regime is ‘committing crime after crime against its Kurdish citizens, and against the Kurds of Syria’.

The effects of this criminal activity are intensified by the fact that towns and cities are being targeted. In particular, Owen says:

Human rights lawyers, politicians, journalists, and trade unionists who are being arrested, tortured, and detained.

In Erdoğan’s mind, she asserts, ‘the terrorists are the Kurds and not the barbaric Daesh’, and for that reason believes the Turkish president is waging a genocide against the Kurdish people. Turkish journalist, Uzay Bulut, says this current massacre in Turkish Kurdistan is nothing new and is just ‘the latest demonstration’ of Turkey’s 90-year-old extermination campaign against the Kurdish population.

According to Human Rights Watch, there have been over 100 civilian deaths” (including women, children, and elderly residents) since the government launched its war in July 2015. Curfews have become a regular occurrence, says Romanian journalist Ion Todescu:

Humanitarian missions are prohibited from entering the areas of so-called cleansing operations… To get to hospital, local citizens have to risk their lives.

Erdoğan has promised the state will continue the war until PKK ‘sympathizers’ are completely eliminated. In other words, Todescu asserts, Erdoğan has ‘chosen ethnocide over dialogue with the Kurds’.

In this campaign, the Turkish army has been given carte blanche to attack Kurdish communities indiscriminately and without any concern for human rights laws or civilian deaths. According to an official document published by ANF on 4 January, Turkish soldiers have been told that ‘any personnel’s restraint from using arms for fear of prosecution might have very grave consequences’ (emphasis added) and that facing ‘prosecution is to be preferred over going into the coffin’.

Western governments and media outlets have been silent about Turkey’s war on its Kurdish population. According to Hiwa Khoshnaw at The Pasewan:

The violence committed by the Turkish military is no less than of the regime of Al-Assad, about which they were not silent.

One of the 200,000 refugees from Turkey’s besieged Kurdish communities told Reuters that the state was:

shelling us with mortars, attacking with tanks

This reminds me of the Bosnian genocide, the mass graves where I worked, and the 1994 genocide in Rwanda. People did not speak up against those mass murders, too. Later, in the face of those massacres, the state authorities were found guilty of staying silent, of looking the other way.

The west is also silent today about the continuing Turkish blockade on Rojava – a region which provides an alternative to authoritarian regimes and sectarian repression in the Middle East. Historian, Dr Jan Best de Vries echoes the questions of some of her students from late 2015:

Why don’t the democratic American and European governments help us more than they do now?

Why are we, with our democratic society, not welcome in the West?

These are very good questions. Why has the UK government refused to recognise Rojava officially? And why does it not condemn the Turkish government for its human rights violations against Kurdish civilians?

Action has been taken but not by our governments. Anonymous hackers have taken Turkish sites offline, and Kurdish activists occupied Conservative HQ in London on 5 January. But the continued silence from both western governments and media sources is deafening, and it reveals a dangerous double standard regarding state repression in the Middle East.

As Khoshnaw insists, the conflicts in both Syria and Turkey can only be ended through negotiation (excluding the likes of Daesh of course, which has no interest in negotiating). The west’s current actions, however, suggest there is little political interest in fostering peace in the Middle East.

In order to defend the progressive revolution of Rojava and stop Turkey’s ethnic cleansing of Kurdish communities, we must ask our political leaders and media outlets what their priorities are. Do they truly want to encourage democracy in the Middle East and defeat Daesh? Will they stop sidelining the plight of citizens in Rojava and Turkey who are seeking to build a peaceful and pluralistic future for the region? And are they prepared to condemn the crimes of Turkey and other repressive western allies in the Middle East? We are more than entitled to expect responses to these questions.

Featured image from 5 January protest in London via @Hevallo