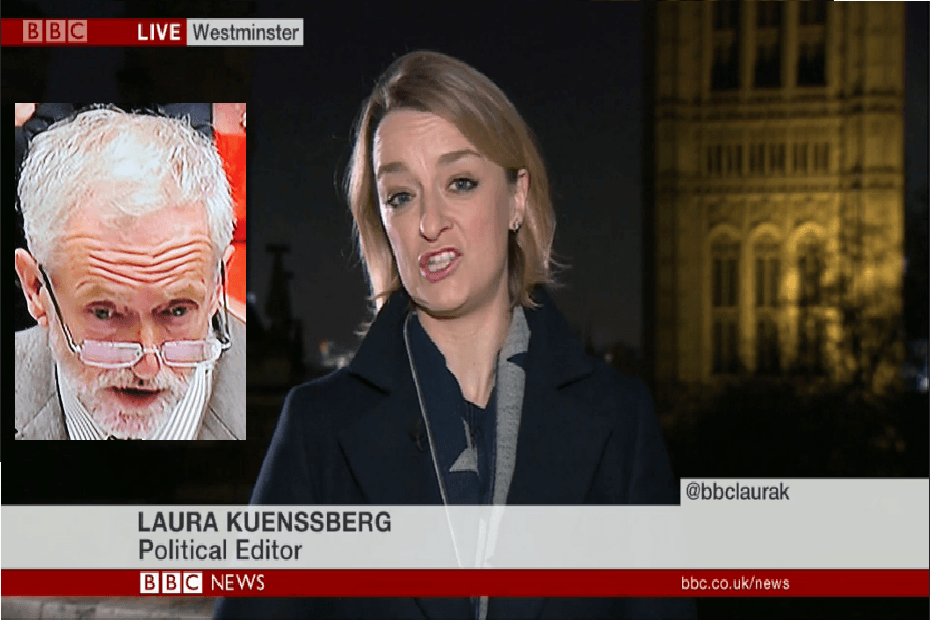 On January 6, BBC News at 10 began with what felt like a Conservative party broadcast. BBC political editor Laura Kuenssberg went on a snarky tirade against Jeremy Corbyn, entirely unchallenged. Her priorities were made clear earlier this week by blogger Tom Pride.

The Westminster bubble has never been more evident. Kuenssberg thinks the public care more about a commonplace reshuffle, mainly concerning people no one has heard of, than the real issues of the disastrous new housing bill, outrageous rising rail fares or a submerged Northern England.

The bubble was made even more evident by BBC News at 10 presenting it as the most important issue of the day. Kuenssberg began her rant by saying:

this whole process has not just been chaotic, but also slow

Does it really matter how long it takes? Who is in your shadow cabinet is an important decision, that deserves time and attention.

She continued to emphasise how long it took:

It began what felt like 48 very long hours ago

She doesn’t waste time blaming Corbyn for the reshuffle not being fast enough for her:

he is meant to be the boss

Well, the Corbyn camp had this to say on their Facebook page:

It’s disappointing that a small clique of politicians who claim to put ‘electability’ first delayed the reshuffle by threatening revenge resignations. Even when the reshuffle was minor, they revenge-resigned anyway, in as high profile a way as possible in order to damage Jeremy and Labour.

To listen to the mainstream media, it is as if that no-one in their right mind could argue against the assertion that Corbyn is at fault here, or that he is a bad leader. But these views, which dominate our screen, are just one side of the debate. There is no choice if you are only shown one side. People of all political persuasions and viewpoints deserve balanced coverage from the BBC, for the sake of democracy and, incidentally, to make interesting television.

The broadcast did air one comment from John McDonnell who said:

However, no one was there to mediate the spiteful commentary from Kuenssberg, through responding to her claims as she made them. His comment was also framed by her negative perspective, and mocked by her tone. It is worrying enough that the BBC’s political editor is so vehemently opposed to the leader of the opposition, rather than providing neutral coverage.

Kuenssberg went on to ridicule the leader of the opposition:

the last 24 hours have been a damaging pantomime

This is an entirely concocted opinion. What is damaging about emerging with a shadow cabinet now more unified than ever, other than how the media have reported it?

the idea that this individual would be faster in responding to floods, when it takes him three days to carry out a reshuffle, is quite frankly laughable

Oh wait, that was David Cameron on PMQs on the same day.

It’s quite concerning when attacks from Cameron and the political editor of the BBC chime so well together.

Kuenssberg continues to spin it in a similar fashion as before:

91% of Labour MPs back Corbyn on the key issue of austerity – and showed it by voting against Osborne’s fiscal charter. Only 21 MPs abstained. More than double that – 48 MPs – defied Harriet Harman’s leadership on the welfare bill last July, showing Labour is more unified under an anti-austerity message.

The vast majority of Labour MPs also backed Corbyn on airstrikes in Syria, which was a free vote. Kuenssberg’s comments ignore this context and give the impression there is a permanent crisis within Labour, through focusing on a few Blairite MPs throwing their toys out of the pram.

She ended her rant with this:

It looks like a party struggling to come to terms with itself, and that’s not a party that will find it easy to get the public on its side

That’s precisely why the reshuffle was necessary. If members of the shadow cabinet are not behind Corbyn, how can Labour expect the electorate to be? Labour MPs can rebel from the backbenches, as Corbyn did under Blair, and as Tory MPs do under Cameron. What would be damaging is leaving the shadow cabinet as it was before.

A Radio 4 broadcast on the same day – 6 January – betrayed similar anti- Corbyn bias. Two journalists who both clearly disagreed with Corbyn ‘debated’ the reshuffle, the only difference was the degree of opposition. Last November, a BBC News at 10 broadcast featured another unchallenged scornful attack on Corbyn by Kuenssberg. There was also a ‘debate’ between five pro- trident pundits, with no one to represent the case for scrapping it.

Broadcasts like these are perhaps why experienced former BBC political editor, Nick Robinson, spoke out against anti- Corbyn bias at the BBC. Or why BBC journalist Jack Darvill told us:

trust nothing you read or watch

The BBC unequivocally presented a one sided opinion as balanced coverage with this broadcast on 6 January. Either it is a factual account of what happened, or it is an opinionated debate that requires both sides to be properly represented. Presenting the latter as the former is an outrageous disservice to viewers, who deserve the impartial coverage they pay for.

You can complain to the BBC here.