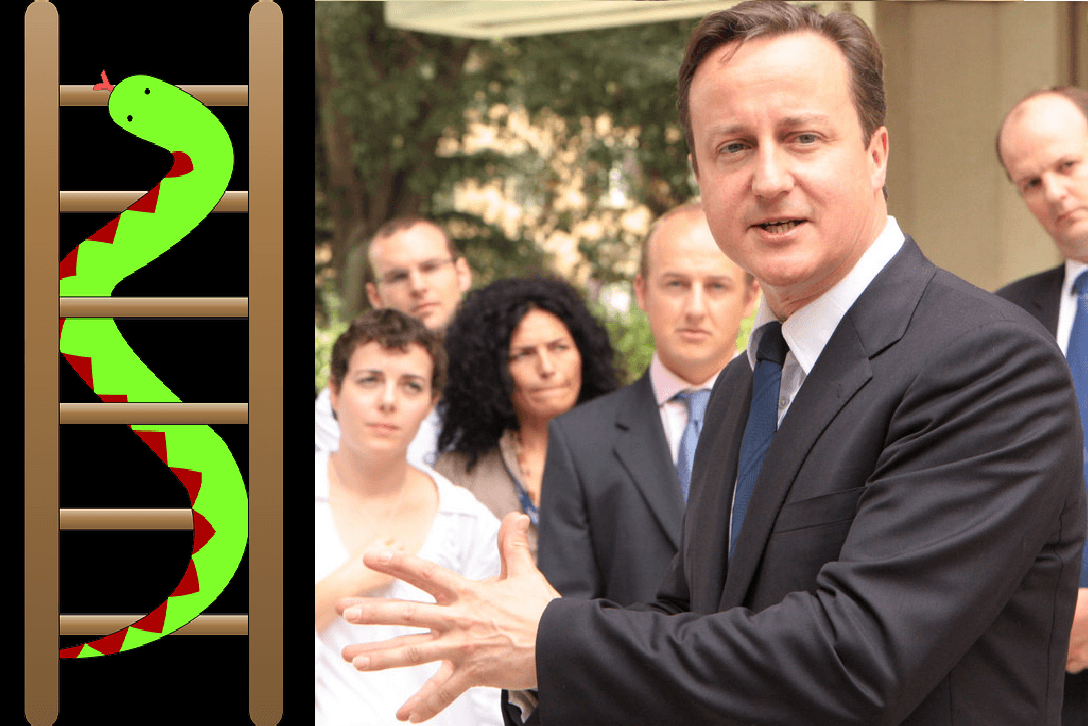 David Cameron has dropped a huge snake on the property ladder. The Housing and Planning Bill was voted on in parliament on 5 January and sets to redefine ‘affordable housing’, rather than properly dealing with the housing crisis. ‘Starter Homes’- the bill’s flagship policy – are expensive houses, redefined as ‘affordable’, as a means to appropriate taxpayer funds and transfer public land to rich developers.

‘Starter Homes’ are defined as affordable, yet a family earning Osborne’s supposed ‘national living wage’ will not be able to afford one in 98% of the country. How much more unaffordable could you get?

Osborne’s ‘living wage’ is another Tory policy that is naked without its surrounding rhetoric. Osborne hijacked the buzzword ‘living wage’ and appropriated it to his own shoddy substitute. It is less than what the living wage is defined as, it ignores London by failing to compensate for prices (offering the same for Londoners and non- Londoners), and does not apply for under 25s.

Cameron’s government will offer you an ‘affordable’ house you cannot afford and a ‘living wage’ you cannot live on.

Branded as affordable, Starter Homes allow developers to delve deep into the public purse, to the tune of £20bn, and grab public land.

This will only exacerbate the housing crisis because without affordability, increasing supply only takes up space that could be used for genuine affordable housing. At £450,000 in London and £250,000 in the rest of England, these houses are anything but affordable. Instead of using public land to build public housing, space will be further depleted by developments for the well- off.

Social housing is not a pipe dream, but an economic and social imperative. Currently, if you earn the national average salary of £26,500, 91% of England and Wales would be beyond your income. In order to solve the housing crisis, it is estimated (pg 4) that 200,000 new homes must be built per year this parliament.

This is not only possible, but a brilliant investment for the nation. The Tory narrative is that we must make huge cuts to public spending with a current public debt of 80% of GDP. We don’t have enough money for the NHS, welfare or housing, because of this debt. When considering this, it seems odd that Clement Attlee’s post- war government managed to construct over a million homes, 80% of which were social, with a public debt of 225% of GDP. Almost  three times what it is today. 1945- 1970 saw an average of 170,000 social houses built every year. What’s even stranger, is that by 1980 public debt was down to just 45% of GDP.

This is because the Tory narrative is bogus.

Public debt did not decrease in spite of investment in social housing, rather the investment was a big reason it decreased. Constructing social housing is jam-packed with economic benefits. When you build a social house the money does not just disappear, but costs are returned to the state through rent payments.

Further, the taxpayer does not just break even in providing security for families with an affordable home. Social tenants will be freed from parasitical landlords charging huge rents. This means they will have significantly more disposable income, which they will likely put back into the economy. Construction also stimulates the economy through increasing demand for jobs and supplies.

We are also not restricted by land. Data taken from the Land Use Database (pg 7) shows only one tenth of England’s surface area is developed at all. Well, there seems to be enough for Cameron to give it away to rich developers for free in his slippery ‘starter home’ scheme.

The principle that landlords should profit on other humans’ basic need for shelter should be challenged. Simply by ‘owning’ the property they make an absolute killing from the rest of us, while doing nothing to earn it. It is hardly innovative to realise that humans need houses.

Appropriating the words ‘affordable’ and ‘living wage’ are not the only times the Conservatives have used Orwellian language manipulation to suit their agenda. Recently, Cameron redefined the threshold by which a child is considered in poverty, seeking to purge 3.7 million children from the datasheets, rather than solving the problem.

Theresa May’s ‘counter extremism’ strategy is Orwellian doublespeak: the only thing that is extremist is the authoritarian, undemocratic plan itself. In which, exercising your democratic right to protest and be involved in non- violent political movements, can be defined as ‘extremist’.

The latest Tory sorcery – transfiguring expensive developments into affordable social housing – comes after a long line of hollow rhetoric, infesting the public consciousness and made easy by a largely uncritical media. Social housing is how we solve the housing crisis, bringing prosperity and security to the people. So-called ‘Starter homes’ are breathtakingly counterproductive, they use up land and taxpayer funds, and obstruct the provision of real affordable housing.