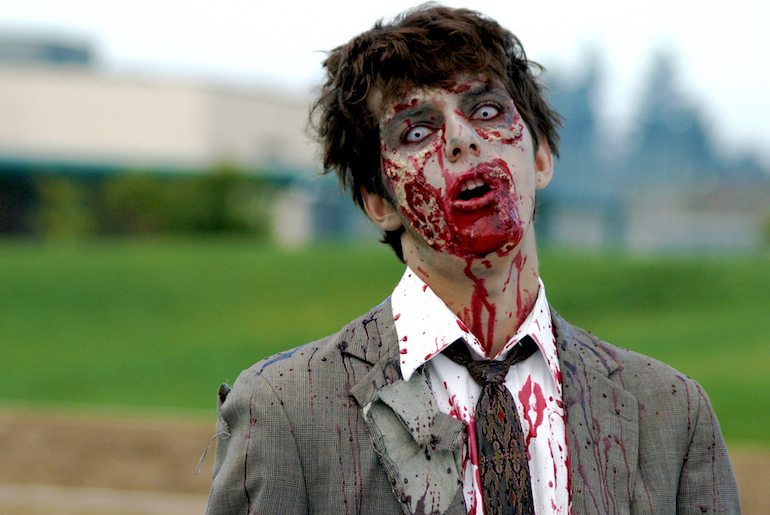 It’s a terrifying thought: waking up one day to find zombies have taken over the world and you have to run for your life to avoid being bitten and infected. Thankfully, this only happens in TV shows and films.

But that’s not stopping scientists from planning ahead. In fact, a researcher from Kent State University who has studied zombies and their diseases is calling for international action to make sure we avoid a zombie apocalypse. As ridiculous as it might sound, this could actually help us prepare for various different emergencies.

In a paper published in the British Medical Journal, associate professor Tara Smith studied zombie appearances in books and films, reviewing their biology and epidemiology. She traced the “current epidemic” to 1968, when they burst onto the screens in Night of the Living Dead. In the paper, she says:

Zombie expert Matt Mogk defines a zombie with three criteria: it is a reanimated human corpse; it is relentlessly aggressive; and it is biologically infected and infectious.

Zombies – also referred to as biters, roamers, walkers and Zs – walk the streets unconsciously, looking for fresh, uninfected people to bite. We’re all familiar with their threat – it’s not easy to avoid the odd zombie on TV these days – and many of us have had that conversation: “where would you go if zombies invaded?” (Incidentally, if you want to plan a safe haven, think about a farm, or a zombie-proof house.)

Smith says the threat is only getting bigger. According to her review, there has been an increase in zombie diseases passed on through biting, like the one in The Walking Dead. Yet we’re doing practically nothing to avoid an apocalypse – and she says it’s time to change that. She writes:

The documented rise of multiple zombie pathogens should be a wake-up call to the international community that we need additional funding and cooperation among scientists and government officials to tackle the looming threat of apocalyptic disease.

This isn’t the first time a scientist has studied zombie epidemics; there’s even a Zombie Research Society. But what’s the point? Well, according to the CDC, it could help us plan for real large-scale emergencies.

On the website, CDC experts suggest we first get prepared for a zombie apocalypse – or hurricanes or pandemics – by putting together an emergency kit with things such as water, food and first aid supplies. We should then come up with a plan with our family (where do we meet, how do we contact each other) and brace ourselves.

This is pretty good advice; according to mathematical modellers, preparing for a zombie attack would look much the same as preparing for an epidemic.

These studies are fun, but they have an important message. Physics Ph.D. student Alex Alemi from Cornell University told IFLScience:

A lot of modern research can be off-putting for people because the techniques are complicated and the systems or models studied lack a strong connection to everyday experiences. Not that zombies are an everyday occurrence, but most people can wrap their brains around them.

Like other members of the Zombie Research Society, Smith is raising awareness of more serious issues, as she told The Washington Post.

We give talks around the country about scientific issues – tied into zombies. It’s a way to bring attention to these subjects that otherwise might not seem interesting. In my case, it’s infectious disease.

So the next time you see a zombie on TV, take a moment to think about what you’d do in an apocalypse (or any other emergency). After all, it could save your life.