This is why Donald Trump is not welcome in Scotland - Canary 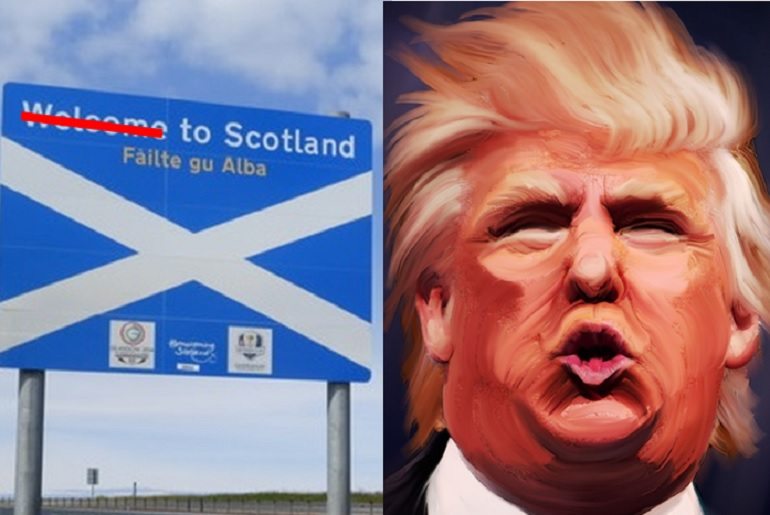 The more US presidential hopeful Donald Trump speaks, the more he seems to offend.

Global opposition to Trump’s prejudiced rhetoric is already significant, and it is only likely to increase. In Scotland, many citizens already disliked Trump because of the invasiveness of his Aberdeenshire golf course and his attempts to scupper plans to build offshore wind turbines nearby. But with Trump’s recent ridiculous outbursts related to Middle Eastern migrants, this antagonism has intensified.

Nobel Peace Prize winner Malala Yousafzai is just one of the public figures who have responded to Trump’s suggestion of “a total and complete shutdown of Muslims entering the United States”. She has condemned these comments, saying:

that’s really tragic that you hear these comments which are full of hatred, full of this ideology of being discriminative towards others… If your intention is to stop terrorism, do not try to blame the whole population of Muslims for it

However, while a Sky Data poll suggests that 29% of Brits would support a ban similar to that proposed by Trump in the UK, many other British citizens fortunately agree with Malala. Around 51% of those polled opposed such a policy, and 57% agreed that the intent behind Trump’s words was to “stir up racial hatred”.

In other words, most Brits are resisting what The Canary has called “Nazi levels of racism and xenophobia”, which have been generated in recent months by the divisive and discriminatory rhetoric of powerful figures like Trump and Rupert Murdoch.

In Scotland’s third largest city, meanwhile, it is difficult to find a person who thinks well of Trump. In fact, Mashable’s Tim Chester says Aberdeen may well be the “ground zero of anti-Trump sentiment in the UK”. But why is that the case?

The city’s inhabitants actually “disliked him before it was cool”, Chester asserts, primarily because he bought up “acres of prime Scottish sand dunes for a giant golf, hotel and restaurant complex”. Former Scottish first minister Alex Salmond has recently insisted that Trump failed to live up to the promises he made at the start of the project about creating thousands of jobs and investing billions. In fact, he says the investment is now “estimated at less than one tenth of what was promised”.

While Salmond and the SNP originally supported Trump’s plans, locals have long been resisting them. Tripping Up Trump member Suzanne Kelly, for example, was part of the initial opposition to Trump in Aberdeen. After the tycoon’s recent comments, however, she started a petition to ban the tycoon from entering the UK, which has to date obtained over 500,000 signatures. Trump’s rhetoric, she says, is rooted in

Local author David Milne, who wrote Blinded By The Bling, accuses local councils of bowing down to Trump and ignoring the opinion of citizens. Now, he insists, Trump’s chauvinist words are simply making the crisis surrounding Daesh (Isis) even worse:

Trump’s collision course with the SNP

But the SNP is no longer on friendly terms with Trump.

In 2013, the Scottish government approved plans for the installation of wind turbines off the Aberdeenshire coast – which would generate enough energy to power 68,000 homes. Trump soon claimed that having this windfarm near his golf course “would spoil the view”, and thus entered into a legal battle against the project. But this was a battle he would lose, leading Alex Salmond to call him “three times a loser” and argue that the legal process had potentially jeopardised “a vital £200 million boost for the economy of the North East of Scotland”.

In response to Salmond’s comments, a Trump Organisation spokesman said the former first minister had an “overinflated ego” and that the Scottish government was embarking on a “dangerous experiment with wind energy” which was based on a “foolish, small-minded and parochial mentality”. This in spite of the fact that wind energy is now considered to be the cheapest energy technology available in the UK.

While Salmond was recently criticised for skipping a debate on bombing Daesh to “unveil a new portrait of himself”, the Trump Organisation’s comments about his “overinflated ego” was very much a case of pot calling the kettle black. Trump’s ego is well-documented, and it appears to be getting worse as he gets more international exposure. As Salmond himself has remarked:

Most presidents of the United States or UK prime ministers usually have about 10 years in office before they go crazy… Donald Trump has made it as a candidate.

But Salmond is not alone in criticising Trump. Current Scottish first minister Nicola Sturgeon has stripped the billionaire of his title of GlobalScot ambassador, and Robert Gordon University has taken away his honorary degree. SNP trade and investment spokeswoman Tasmina Ahmed-Sheikh has stressed that she does not “want to see Donald Trump in Scotland” and that the country does not “want his money” until he apologises for his call to stop Muslim refugees coming to the USA.

Whether Scotland takes further steps in response to Trump’s increasingly fascist rhetoric or not remains to be seen. What is clear, however, is that the tycoon is rapidly losing friends while gaining the admiration of the most violently racist elements of Western society. But although he is happily digging a hole of self-destruction all by himself, we should definitely be giving him a helping hand whenever possible. His words and views must be confined to where they belong – with the regimes of Hitler and Mussolini as a historic example of a world to which we must never return.