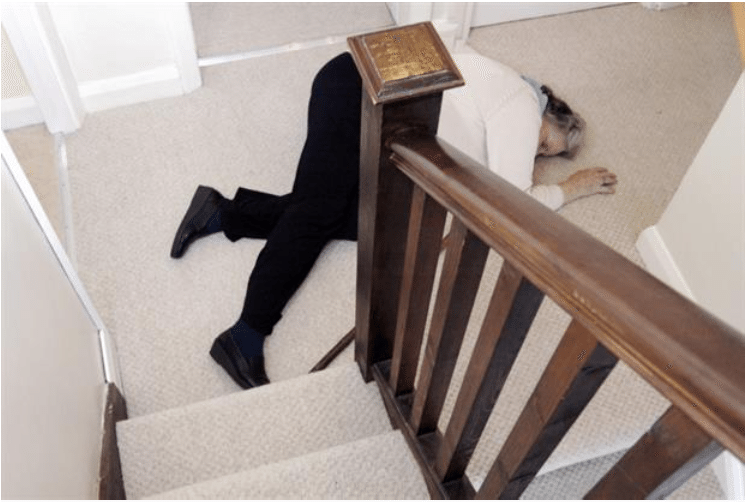 A district council is wishing its pensioners a merry Christmas by introducing a new ‘falling fee’ payable in the event they require being helped back up after falling over.

Tendring District Council, which covers a big chunk of East Essex including Clacton-on-Sea, are introducing the fee to its Careline service. Elderly residents will be charged an annual fee of £25.92 to cover being helped onto their feet after suffering a fall. This begs the question, what if they cannot pay? Will Tendring Council’s homecare service simply work around the body of the elderly person calling for assistance from the ground, then leave?

The answer is actually yes. In the event the fee is not paid, the council confirmed to The Mirror that an ambulance would have to be called.

The Chairman of Tendring Pensioner’s Action group, Michael Le Cornu described his horror upon finding out about the charge. He said:

“The simple fact is, you are getting penalised for falling and these people are the most vulnerable in our society. How is that right in this day and age?

“It really is quite shocking. This sort of thing shouldn’t be happening in the 21st Century.

“We have paid taxes all our lives for health services – this was supposed to be our insurance, but now we are being asked to pay again.”

They have a point.

“It’s immoral they would even consider charging elderly people to pick them up when they have already signed up to pay at least £20 a month to be a member of Careline.”

The case brings to mind the horrific death of Gloria Foster.

In February 2013, 81 year old Gloria Foster suffered a lonely and excruciating death from starvation and thirst having been left without her essential care for nine days. Mrs Foster was a former secretary who required four daily care visits to take care of her most basic needs after she was left debilitated by stroke. She had no children and her husband had died thirty years previously. The company responsible for her care, Carefirst24 had been raided by the UK Border Agency after allegedly employing illegal immigrants and the local Surrey Council assured all current clients would be taken care of. However, Gloria was found starved, dehydrated, with severe bed sores and a faint pulse after being left for over a week stranded in her home unable to move. One can only imagine the fear and desperation one might endure alone, immobile, unable to reach a phone to call for help, use the bathroom, get to food or water for over a week. Speaking to the Sutton Guardian, her friend Ann Penston said that the care from CareFirst24, who had looked after Mrs Foster for several years prior to the raid, had always been of the highest standard.

In the same week that Mrs Foster lay dying as a result of failures in the care system, Birmingham City Council announced crushing half a million pound a year cuts of provision of home care for those like her. Birmingham is not alone. The Mayor of Bristol approved the Council’s decision to close eight of its eleven council run care homes last month. This week two further closures were announced in Peterborough. In fact the same wave of closures is taking place in Haringey, Anglesey, Maldon, Argyle & Bute, Ilkeston, Derby, and many other towns and cities up and down the country as austerity drives council’s to cut costs despite growing need.

Today, the average cost of a single room in a care home has risen to over £27,000 a year. This is higher than the average UK annual wage (£26,000) and more than double the average annual pension income of £13,208. In fact since 2011, care home costs have risen at twice the rate of inflation, whilst standards of care have slipped.

One might expect that for these breathtaking sums we might have the finest care home in the world. Yet, in 2012, the regulatory body for the UKs care homes The Care Quality Commission (CQC) published a damning report that showed that more than half of all elderly and people with disabilities in care homes were being denied basic care.

The report showed that people suffering incontinence were waiting more than two weeks for a consultation on their condition in more than 40% of care homes for the elderly surveyed. One might think perhaps this was some failing, but this was classed as success; 40% of the care homes surveyed set themselves a target of 90 days (that’s three months!), to make such a basic check up for a resident.

Age UK followed up with a 2014 report entitled ‘Care in Crisis’ which explained how persistent defunding of social care services was leaving elderly people in the most desperate situations.They discovered that in 2011, it was estimated that of 2 million older people with care related needs, nearly 800,000 received no support from public or private sector agencies.

Every cut in funding, every complicated means test, every additional unaffordable fee leaves vulnerable older people at risk of neglect – and the government is only making it worse, actually increasing the pace of cuts, rather than reinvesting in our care services. These men and women pad their dues, and now it time for the government to honour those years of hard work and service. Instead, they are abandoning the elderly.

There is a crisis in the care of our elderly people. So while the bankers who bankrupted Britain pop the champagne corks ahead of the next bonus season, the elderly people of Britain face unnecessary deprivation to pay the bill.