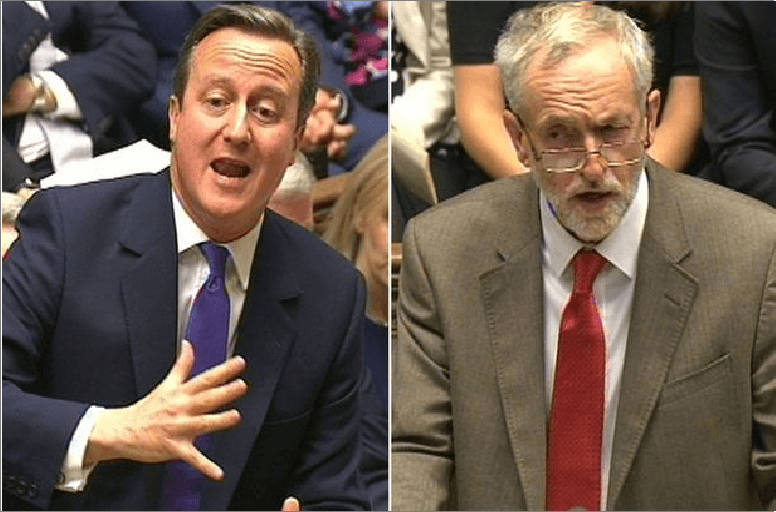 David Cameron habitually attacks an ideology much closer to his own than Jeremy Corbyn’s during Prime Minister’s Questions (PMQs).

At PMQs on Wednesday, Cameron responded to a question from Labour MP Stella Creasy about the devastating impacts of Private Finance Initiatives (PFIs) on the NHS.

PFIs are effectively a scam where the state rents its institutions and infrastructure from the private sector at astronomically higher rates of interest than if the state just built it all itself. The Initiatives siphon off colossal amounts of public money into private hands, while simultaneously handing over control of public services to the private sector.

Sometimes, it takes a long time to unwind the damage done by a Labour government.

The elephant in the room here is that Corbyn has always been fully opposed to PFIs, throughout the New Labour governments of Tony Blair and Gordon Brown.

PFIs are in fact much closer to Tory ideology than to Corbyn’s Labour. Moreover, it was the Tories who invented PFIs under John Major in 1992. And it is the Tories again who have continued PFIs under Cameron, except this time they are an even sweeter deal for the private sector.

Enter George Osborne, with his ‘PF2s’, soothingly murmuring to investors that this time the taxpayer will shoulder even more of the risk.

PFIs are Conservative policy, continued and made widespread by Tony Blair who was essentially a Tory in a red tie. When asked what her greatest achievement was, Margaret Thatcher famously said:

How delightful for Thatcher; she inspired an opposition that didn’t really oppose the Conservatives at all. Cameron seems to share the sentiment, continuing week on week to direct criticism at New Labour, rather than at Corbyn.

At PMQs on 20 January, Cameron was questioned on scrapping the university maintenance grant for low-income students, which was not in the Tory manifesto. Again, he responded by desperately attacking New Labour, rather than addressing the policy or criticising Corbyn:

Like PFIs, Corbyn fully opposed tuition fees, so Cameron’s response falls flat. While, it was the Tories who increased tuition fees to £9,000 per year during their previous coalition government.

The pattern continues. At PMQs on 6 January, Corbyn challenged Cameron on his flood defence spending, leading him to reply:

The investment in flood defences was £1.5bn in the last Labour government; £1.7bn in the government I led as a coalition

Opposing myopic reductions to public spending is the centrepiece of Corbyn’s Labour, trumpeting the long-term rewards of investing in infrastructure. Indeed, for every £1 spent on flood defences the taxpayer saves £8 in reducing later economic damage. Cameron ignores this, deluding himself that the Tories are still debating with Thatcher’s greatest achievement, rather than Thatcherism’s greatest threat.

Corbyn confronted Cameron on the rip-off tax deal with Google, on PMQs on 27 January. Cameron slithered around the question, remarking:

No government has done more than this one to crack down on tax evasion and aggressive tax avoidance, and certainly not the last Labour government

Corbyn’s economic adviser, Richard Murphy, has been holding successive governments to account for tax avoidance and evasion for years. He was very critical of both Tony Blair and Ed Miliband, arguing for a more comprehensive plan to tackle tax-dodging. Cameron continues to grasp desperately at irrelevancies from the past, attacking a previous Labour party that was itself heavily criticised by Corbyn’s team.

Additionally, it was Thatcher who set up mechanisms to bolster tax dodging. Her lassiez faire attitudes to corporate tax collection were accordingly continued by her heir, Tony Blair. This is irrelevant to the Labour party of the present day, and Cameron’s retorts are only an indictment of his own Tory ideology.

And the Tories have continued it further, allowing Google to get away with just a 3% tax rate. Corporation tax has stood at between 20-30% during the relevant period, so such a low-rate is an insult to the British public and small businesses who must pay their fair share.

So Cameron is not exactly lying when he says no administration has done more to crack down on tax-dodging than his. But he is plainly hoping no one notices that his government wins that title rather by default.

Corbyn called out Cameron on failing to answer the question, and he responded:

Cameron thus confirms again that he has a truckload of ammunition to unleash upon the inheritors of his own Conservative tradition. Given how heavily Cameron has modeled himself on Tony Blair, the irony reaches new heights.

As the link between questions and answers at PMQs becomes ever more difficult to see, Cameron abjectly fails to muster any effective criticism of Corbyn’s core policies. Instead, he either barks endless generalities about his supposed ‘strong economy’, or drivels on about incidental issues like the Falklands or Corbyn’s reshuffle. And no one cares very much about either, when faced with an unprecedented housing crisis and a crippled NHS.

When not ramping up the rhetoric, he is reduced to desperately attacking New Labour, whose ideology was much closer to his own, than Corbyn’s. A feeble New Labour Party, which capitulated to the Tory narrative, is a fond memory Cameron can’t quite let go of.