Luck or divine intervention? Clinton win due to coin toss in US presidential race (TWEETS) - Canary 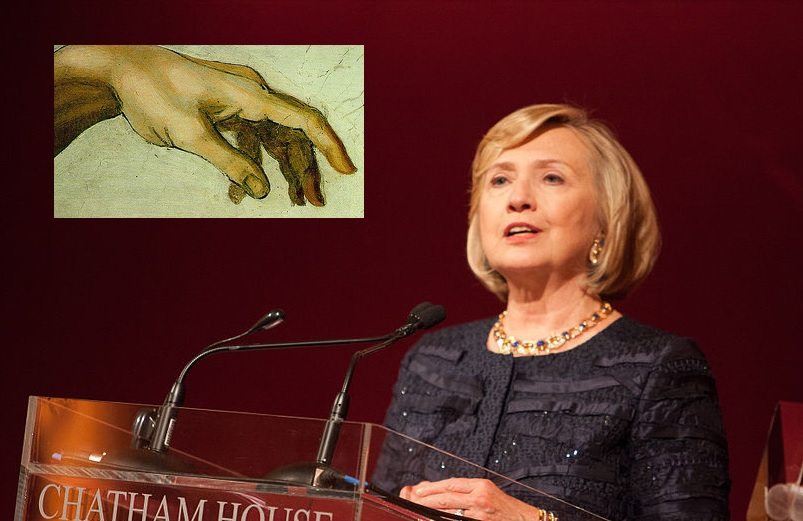 The US Democratic presidential nominees have received their first indication of who may reach the White House later this year. On 1 February, after months of campaigning, rallies, and debates, the citizens of Iowa cast their vote. The two main frontrunners, Bernie Sanders and Hilary Clinton, were neck and neck in many of the counties. The race was so close in a handful of precincts – a complete tie – that officials sought help from the most unlikely political source: God.

A long-standing, but rarely used, convention in the US political voting system is the unbiased coin toss. Delegates are what candidates gain as a result of support from voters – the more delegates a candidate has, the more likely they are to win the presidential nomination. As the News & Observer notes, if the candidates have an equal share of the votes in an area, but there are an odd number of delegates to award to them, the final delegate’s endorsement is decided by tossing a coin. Journalist Ben Norton explained the results in these coin tosses in Iowa:

Lucky? Perhaps. But, as The Guardian highlighted, some interpret the result of a coin toss to mean a “chance outcome as the expression of divine will”. Divine will is, of course, the preference of the big man himself. And as alien as it is in the UK for religion to play a big part in the political process, in the US faith is very much a factor:

This is why, on a Christian-right ticket, Ted Cruz raced to the front in the Republican race. But has the almighty really got Clinton’s back?

It turns out money decides elections after all. #IowaCaucus pic.twitter.com/M3rLftDXoF

This is an important point, and if it were entirely true in this election, Clinton would win hands down. The Clinton Foundation is reported to have amassed millions from speaking fees, and billions over the years through donations, some of which were given by companies, governments and individuals who lobbied Clinton when she was Secretary of State. As one twitter user identifies:

By contrast, Bernie Sanders has raised his campaign funds through small donations averaging less than $30 each, raking in a record 2.3 million of these.

In fact, his entire campaign has been centered on the need to take big money out of politics and, on a wider scale, to create a more equal society by reducing the influence of large corporations, and the financial sector. That’s why “not for sale” is the rallying cry heard at Sanders’ events. As Sanders himself described, speaking in Iowa:

I do not want to be liked by everybody. I want to be liked and supported by the middle class and working families because I am going to take on Wall Street and the billionaire class. They do not like me today. They will like me even less if I am elected president. I welcome their dislike.

This is a welcome stance to many in the western hemisphere, not unlike the position of Jeremy Corbyn, and political organisations like Podemos. As citizens, we are subjected to daily evidence of how corporations have captured our neo-liberal governments. George Osborne gives a meagre tax bill to Google, and sells off £26bn of public assets on the cheap to the private sector. David Cameron heads to Brussels to secretly sell off the NHS to profit-making health companies. The banking regulator is assessed, and found to be the bankers poodle. The list goes on.

But with the bulk of private interests weighing down politicians pockets, it’s nothing short of a miracle that principled politicians like Sanders can rise above that quagmire. It’s also beyond impressive that a man who trailed heavily behind Clinton when the campaign started, has transcended to a position where he is matching her vote for vote.

The Iowa result is largely being viewed as too close to call. Clinton, of course, has declared a razor-edge victory. The difference those six coin tosses will make to the outcome of the presidential race is minor. And why they all landed Clinton side up is anyone’s guess. But it is crystal clear that Sanders is better suited to part the muddy seas of corporate capture that separate citizens from democracy. That’s the divine intervention most people are looking for.

Pledge to take action here to assert your civil rights.

Sign the petition against the TTIP trade deal which will take away democratic rights, and give them to corporations.

Support The Canary for more well-researched journalism, seeking to hold the powerful to account.