Daily Mail asks 'Who will speak for England?' The whole of UK answers (TWEETS) - The Canary 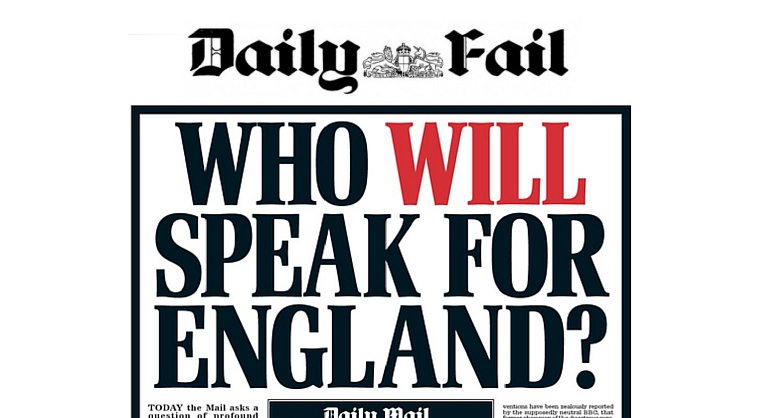 The Daily Mail has been mocked and berated on Twitter after it posed the question “Who will speak for England?” in huge letters across its front page. It was a botched attempt to criticise David Cameron’s renegotiation plans with the European Union, and it backfired royally.

The quote refers to former Conservative MP Leo Amery. In 1939, Amery was furious when then Prime Minister Neville Chamberlain suggested in the House of Commons that he was not going to declare war on Germany, despite Germany’s invasion of Poland. As Labour’s deputy leader Arthur Greenwood stood up to speak, Amery shouted: “speak for England”. The Daily Mail’s editorial said:

And Greenwood did just that, voicing anger over the premier’s reluctance to honour Britain’s treaty obligation to Poland. Bowing to the mood of the House, Chamberlain declared war on Hitler the next day

The Daily Mail had to clarify its headline on two counts in the copy: it claimed it was not suggesting parallels between the Nazis and the EU. Why then draw the comparison in the first place? It also tried to explain that “England” meant “the United Kingdom”, just so we’re clear. Even though it left the UK out of the headline.

Not only is it bizarre that the Daily Mail decided to compare the Nazi invasion of Poland to the EU renegotiations but, as some on Twitter pointed out, the Daily Mail was rather supportive of Hitler around that time, and its owner, Lord Rothermere, personally and effusively praised him:

1934: the owner of the Daily Mail speaks for England. #WhoWillSpeakForEngland pic.twitter.com/cT9jVYBFlp

Here is Rothermere next to the man he so admired:

Twitter also came forward with suggestions on just who could speak for England.

We could have the Chuckle Brothers.

Worryingly, this man speaks for London:

#WhoWillSpeakForEngland What about Wales, Scotland and Northern Ireland? Bit rich from a paper that's registered not to pay tax here!

Don't know '#whowillspeakforEngland' but Cameron and the Tories sure as hell don't speak for Wales, Scotland and Northern Ireland.

Who will speak for England? Certainly not The Daily Mail – a newspaper registered in Bermuda and owned by a British hereditary peer who became a French citizen to dodge tax. The public just showed it will not put up with their hypocrisy and vileness. The whole of the UK just spoke for themselves, by mocking the Daily Mail.

Contact the Daily Mail and let them know your views