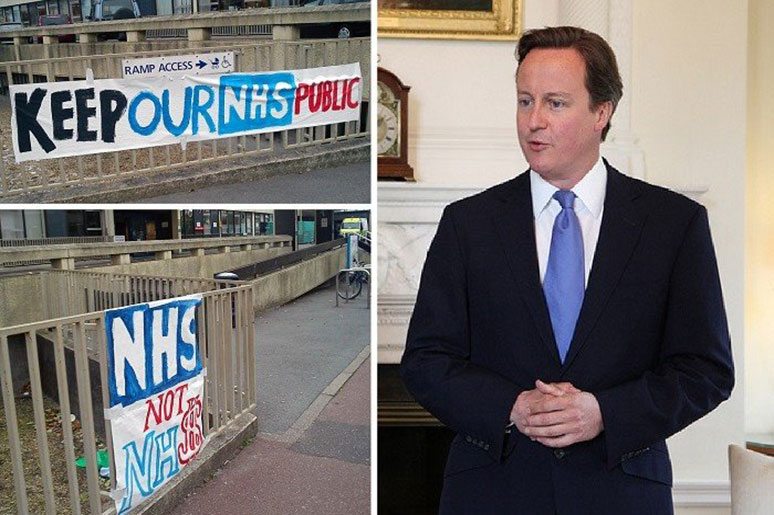 The ‘mass privatisation’ of health services in Staffordshire has been shelved, leaving David Cameron’s plans to sell-off the NHS in tatters.

Health bosses pulled the plug on two major contracts worth £1.2 billion after the running costs of a similar £800 million deal to privatise elderly care in Cambridgeshire spiraled out of control within just eight months.

A ten-year tender to run Staffordshire cancer services should have been awarded by December, reports The Stoke Sentinal.

But the £687 million sell-off has now been scrapped over fears it would be ‘financially unsustainable’.

Plans to outsource Staffordshire’s end-of-life care in a deal worth half a billion pounds has also been put on hold.

NHS chiefs say that the contract suspension will remain in force until a review of the financial meltdown in Cambridgshire has been conducted.

To ensure the contract is “robust and sustainable”, they say want to find out what went wrong so they don’t make the same mistakes twice.

Officials say the inquiry will be completed by the end of the month, but have given no timetable as to how quickly they can carry out assessments.

Following the recent termination of the Uniting Care contract in Cambridge and Peterborough, NHS England has commissioned an independent review to find the key facts and causes behind its collapse.

Lessons learned will be used to make sure the cancer and end-of-life contracts are robust and sustainable before any announcements are made.

The proposals were branded as “mass privatisation” by campaigners, who, aside from breathing a sigh of relief, hope they will eventually be scrapped completely.

More than 64.000 people signed a petition opposing the lucrative sell-off, which campaigners warned “could open the door for sweeping privatisation of our NHS across the country”.

Gail Gregory, of the Cancer Not For Profit campaign, said:

In the interests of patients we now hope the whole thing will be scrapped completely.

Financial problems were behind the collapse in Cambridge and given the soaring demand for cancer care from this fixed-price contract, surely that will apply here.

The decision to suspend two major multi-million pound contracts will come as a massive blow to David Cameron, who has appeared hell bent on flogging the NHS to private interests since he took office.

Last year, the prime minister signed off a whopping £3.54bn in NHS deals to private firms, allowing private providers to cherry pick the most lucrative services to boost their profits.

Contrary to the government’s claim that only 6% of the service’s budget goes to private firms, a report by the NHS Support Federation campaign group revealed 36.8% were awarded to for-profit operating companies.

The first step towards privatisation was the 2013 top down re-organisation, which saw large numbers of NHS departments abolished. The changes, ushered in by the 2012 Health and Social Care Act, devolved responsibility to a series of local health bodies, supposedly to give GPs more clout when it came to how budgets were spent.

Instead, they just paved the way for hard-up Clinical Commissioning Groups (CCGs) to enlist the likes of predatory operating firms Serco and Health United to run front line services at a premium to the taxpayer.

But now the Staffordshire deal has been waylaid, David Cameron has been forced to slam the brakes on NHS privatisation across the country. For the sake of the NHS – our most cherished institution of equality, fairness and democracy – let’s hope it stays that way.