Racist thugs are targeting British children, we need to sweep these Nazis off our streets - Canary 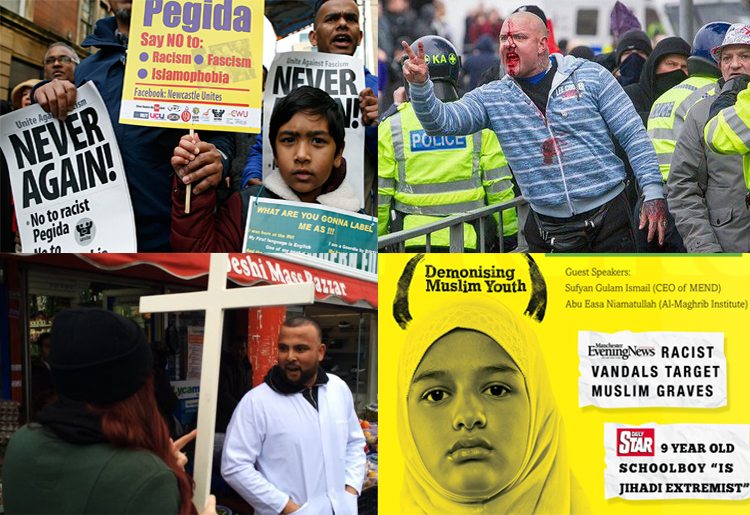 There is a very real danger that we are becoming complacent about the actions of the far-right, and that as the horrors of Nazi Germany begin to fade from memory we come to regard groups like the EDL, the National Front, and Britain First as a joke, simply sighing and shaking our heads when we hear about them.

But a disturbing new development should lay to rest notions that these racist, fascist, and white supremacist organisations will simply evaporate if we laugh at them – or that we can ignore them without repercussions. In the last few months, children and teenagers have been singled out for recruitment drives by the National Front, and Islamic faith schools have been targeted for obscene acts of intimidation by the English Defence League (EDL).

On 21 January, staff and students from Madani Academy in Portsmouth arrived at school to find a severed pig’s head tied to the school gates. The academy is an Islamic faith school, and it teaches children from the ages of five to eight.

And this is not an isolated incident. Before the school was even opened, a pig’s head was stuck on a spike outside the building, and in 2014 members of the EDL marched against the school.

This was not the work of a lone wolf, nor are these incidents confined to one locality.

In December 2015, a 28-year-old man was arrested for dumping two pigs’ heads outside Markazul Uloom Girls School in Blackburn. Just prior to this, graffiti had been daubed on the wall of the school.

These vile actions are rightly investigated as hate crimes. But they are also purposeful political actions of fully grown adults. And they primarily intimidate young children, their parents, and teachers.

On the recent violence

These reports arrive against a backdrop of increasing violence against refugees, heightened Islamophobia, and clashes on our streets.

In Dover, we witnessed running streets battles between the white supremacist National Front (NF) and anti-fascist activists – a level of violence and intimidation which the police struggled to control. NF members were seen to give the Nazi salute en masse, carried flags that read ‘Hitler was Right’, and banners displaying neo-Nazi symbols. At one point, they daubed a swastika on a coach in what appeared to be blood.

Much of this might be explained away by a desire for attention or a way of intimidating the counter-protesters. But it’s clear that at the heart of these groups lies an ideology indistinguishable from that of the fascists at home and abroad that were defeated in the last century.

In Luton, Britain First members donned uniforms and carried white crosses down a street where a number of shops appeared to be run by Muslims. In what they called a “Christian Patrol”, they attempted to provoke the shopkeepers and told them they were “taking the country back”. Every major Christian denomination has since denounced these actions.

It’s extremely painful for any Christian when the name of Jesus Christ is hijacked to justify hatred and to spread fear and mistrust. It is actually a kind of blasphemy.

His words echo the words of many Muslims when speaking about how Daesh (Isis/Isil) has hijacked the words of Muhammad to justify its atrocities.

At the same time, fascist groups openly recruit minors – with apparently few consequences. In December 2015, the NF said it was preparing to hand out copies of the Bulldog, a magazine aimed at teenagers which promotes fascism and white supremacy.

We have sent copies of the party’s re-launched Bulldog magazine to our units across Scotland. We will be distributing free copies of Bulldog to school children aged 14 years and over.

The fact that they are attempting to create their own version of the Hitler Youth should be worrying to all. It is not just the spread of a poisonous ideology which is of concern, but also the life of violence and hatred they are being lured into.

The idea that this far-right racist organization that wants to deport people who have made Scotland their home and criminalize gay people plans to target schoolchildren is repugnant. Hanging around school gates with hate-filled propaganda shows the level to which this outfit stoops.

The demonisation of Muslim youths

Muslim students already have enough problems without being targeted by hate groups or their peers being indoctrinated by the NF. The term terrorist has already joined other playground insults. After Daesh atrocities such as the Paris Massacre, schools must deal with a wave of physical and verbal abuse directed towards Islamic students.

Needless to say, it is wrong to blame these children for the actions of Daesh – which Muslims do not consider Islamic in faith or deed. Teachers and parents firmly explain to children that the actions of one group do not represent an entire religion, culture, or ethnic group.

And yet this is the very narrative that far-right groups propagate, and in many ways has been allowed to grow by successive UK governments with agendas in the Middle East.

We see the resurgence of far-right populism across Europe and in the US. Donald Trump, Marine le Pen, and Hungary’s Jobbik party appear to garner undue attention from the media in relation to their actual chances of winning elections. The press was trumpeting the victory of Marine Le Pen in France’s regional election, only for them to fall flat on their face after the first round of voting.

But despite a lack of electoral success, the fact that they have anywhere near the level of support they do is disturbing, and it ties into the rise of right-wing movements across the continent. Pegida has swept Europe with anti-Muslim and anti-refugee protests, and on 4 January Pegida UK was relaunched by former EDL leader Tommy Robinson.

gathered with the purpose of attacking refugee children.

They identified themselves as the neo-Nazi Swedish Resistance Movement, and distributed leaflets threatening to give “north African street children” the “punishment they deserve”.

But it was not always ‘open season’ on Islam for the far-right. Since the invasion of Iraq and Afghanistan, successive governments, the mainstream media, and the security industry have made it their business to trample the rights of British Muslims.

Only one social group in Britain has been detained without trial and sent to overseas prisons like Guantanamo Bay on scant evidence. It also appears to have become acceptable to bait Muslims live on air. And the rhetoric of three successive governments and their leaders has been continuous scaremongering, giving the impression that all Muslims are ‘guilty until proven innocent’.

It is in this climate of persecution that the far-right has been fostered and allowed to flourish. Their views are reinforced and normalised by the tabloids, the BBC, and the government every time David Cameron blames Muslim mothers for extremism or makes a “bunch of migrants” remark.

A threat we cannot ignore

Many write these far right groups off as a joke, even when our television screens are filled with images of violence. Accounts abound of the ineptitude, factional strife, and lack of organisation and leadership in these groups, and that mirrors their public perception.

But the same could have been said of the situation in early 1930s Berlin, with its bickering among political groups made up of deprived, angry, and humiliated citizens. It was a tinder-box that any half-competent sociopath could light. When it comes to far-right groups, we cannot ignore their potential for destruction or their malice, especially when it comes to the harm they may pose to Britain’s children, Muslim or otherwise.