These woman-hating losers just cancelled their pro-rape rallies, because of "safety concerns" - The Canary 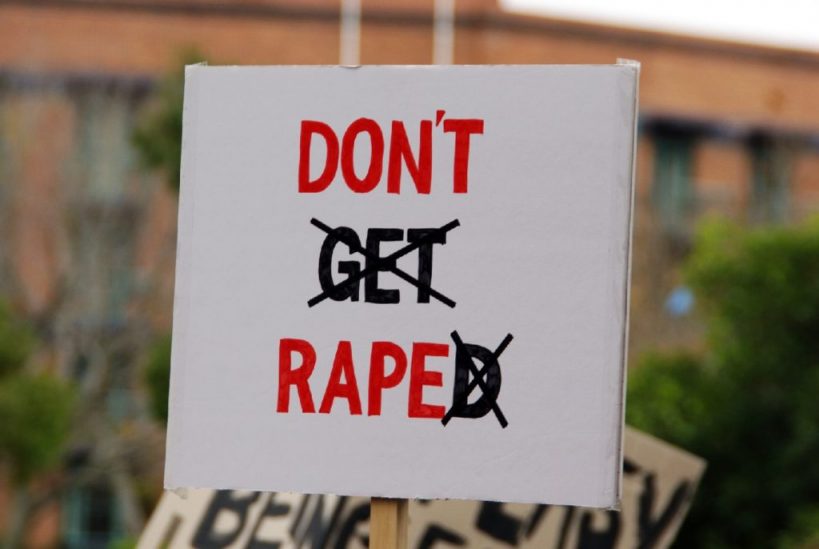 Rape is horrific. Making excuses for rapists is almost as bad. So how do we react when a rape advocate popular on social media, organises events in eight of our cities? Well, we place them under so much pressure that they stop in their tracks, turn tail, and run.

But the plans were not met with silence. While freedom of speech means people have the right to say despicable things, we also have a responsibility to combat all views which encourage violence, hatred, or chauvinism. And many citizens around the world came together to exercise this responsibility. They challenged in a variety of ways the vile idea, held by a few male chauvinists, that there are ‘legitimate’ forms of rape.

It is a testament to citizens around the world that the meetings have been shut down.

Who is this guy?

Referred to by the Daily Dot as “the Web’s most infamous misogynist“, Valizadeh’s most controversial statement is probably the following:

He justifies himself by saying:

If rape becomes legal [on private grounds], a girl will not enter an impaired state of mind where she can’t resist being dragged off to a bedroom with a man who she is unsure of – she’ll scream, yell, or kick at his attempt while bystanders are still around.

According to a change.org petition, the books Valizadeh has published are “a thinly veiled guide to getting away with rape”, with him admitting openly that he has forced himself on at least one woman too drunk to give her consent. The petition insists:

He’s entitled to write and think and say what he likes.  He’s not, however, protected from the backlash against his output, or removal of platform. This isn’t about banning books, it’s about ensuring he, and Amazon, can’t profit from rape.

The events organised for 6 February – under the name ‘Return Of Kings’ – were first public, then secret, and then cancelled altogether. In Valizadeh’s own words, the purpose of the meetings was to encourage like-minded men to:

But in the end, Valizadeh insisted:

I can no longer guarantee the safety or privacy of the men who want to attend on February 6… there will be no official Return Of Kings meetups.

Citizens in numerous locations had planned to hit the streets of the host cities in a united fashion, to emphasise that rape apologism or advocacy is unacceptable. A female boxer in Toronto even challenged Valizadeh to get in the ring with her.

But Australian TV presenter Waleed Aly insisted that to truly deflate Valizadeh’s ambitions, people should ignore him altogether. He said:

Having manufactured this outrage, Roosh uses the spotlight on him to sell books… Before you let your outrage fly, you should also know this man-beast is also intelligent, calculating, manipulative, and focused almost entirely on one thing: increasing his public profile

So yes, protests work. That’s our right, and we should exercise it. And internet pressure, like the efforts by Anonymous to expose all of those who support Valizadeh, has also made an impact.

At the same time, we can direct our indignation in a positive way, supporting and donating to charities that help the victims of abuse.

But the best way to show our opposition to sexual assault, and solve the problem in the long run, is to address the root causes. Why do some men feel they can get away with sexual assaulting or harassing women? How can we best stop this from happening?

Stories like that of Valizadeh simply act to remind us that we need to take concrete steps to prevent the crimes of the aggressors in the first place. So let’s have a frank and open debate in society about sexual abuse, which at the same time refuses to give misogynist attention seekers like Valizadeh the limelight they seek.

Support organisations like the Rape & Sexual Abuse Support Centre, The Survivors Trust, and Victim Support. And for more information on dealing with sexual abuse, see here.

See the following hashtags on Twitter: #ItsNotOK, #turnawayreturnofkings, #OpGlasgowKiss, #realmendontrape, and #nomeansno, and sign the change.org petition mentioned earlier in this article.

Find out about the Clear Lines Festival.