After all that hatred, this is how many of the Cologne attackers are recent refugees - The Canary 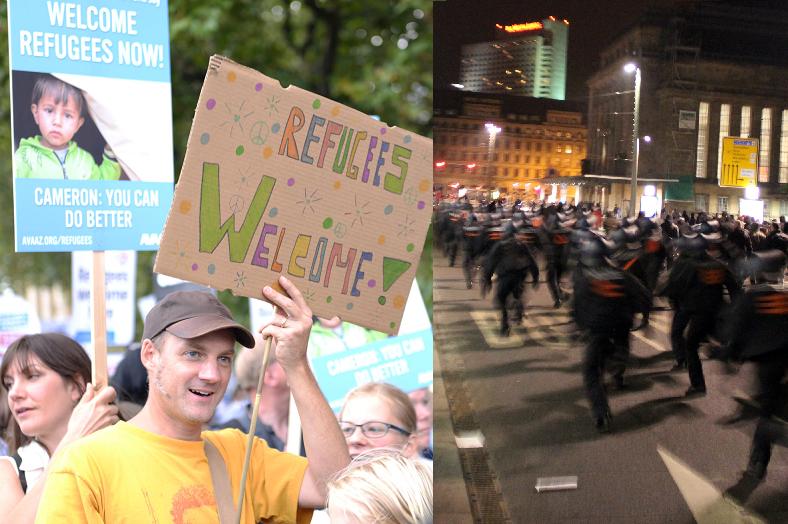 There has been another ‘twist in the tale’ of the Cologne attacks. It has emerged that only three of the fifty-eight men arrested in connection with the attacks are recent refugees from Syria or Iraq. The most up-to-date information, while still very serious, puts a rather different gloss on the Cologne attacks than some people might expect.

Of the suspects, most are of Algerian extraction (25 people), or of Moroccan extraction (21 people). Three of the suspects are actual German citizens, three are from Tunisia. Moreover, according to Cologne’s public prosecutor, Ulrich Bremer, of the 1,054 complaints received, the majority were not for sexual assaults. Approximately 600 were in fact robberies. That still means over 400 sexual offences, which remains an abhorrent figure, but it does suggest that previous estimates of over 800 were hyperbolic.

It must be emphasised that Bremer has distanced himself somewhat from the way his findings have been reported in the media. Of the great majority of those arrested, he insists,

They have various legal statuses, including illegal entry, asylum-seekers and asylum applicants. That covers the overwhelming majority of suspects.

While this may well be true, it is significant that the great majority had been in Germany for some time. Even more important is that only two were recent arrivals from Syria, and only one from Iraq. The general impression that recently-arrived refugees, mainly from Syria, were to blame for the Cologne attacks, now appears very doubtful.

Therefore, it was nonsense that many reactionaries on the far-right, such as Pegida, were demanding a closure of borders in response to the attacks. It would have served only to punish people who could not have been behind the Cologne attacks anyway. But also, even an irrational connection between the new refugees and the attackers is now severed. Closing the well-trodden trail from Syria to Germany would not have made any real difference.

The right-wing-driven backlash against refugees in Germany and eastern Europe since New Year has been opportunistic and substantially dishonest. Even when accepting that recent refugees were not to blame for the Cologne attacks, there is still an ugly tendency to say they bear a measure of responsibility because “All Muslims are the same”. The violence in such protests raises the old question as to why many in Europe see themselves as ‘morally better’ than Muslims. How are sabotage, arson and lynch-mob beatings ‘morally better’?

If all of this sounds depressingly familiar, that’s because it is. History has in fact repeated itself very rapidly. There was much the same rabid hatred directed towards refugees in the aftermath of the Paris attacks in November. On that occasion, as well, it turned out that the attacks had had very little to do with the refugees at all. Knee-jerk, prejudiced assumptions keep leading to wrong conclusions.

People escaping the unsaturated hell to which their homelands have been reduced by warfare have become easy, undeserving, and repeated targets for the littlest minds. Too often it is the little minds that think the dominant thoughts. Thoughts that are then expressed by the loudest voices. These thoughts assume that a ‘foreign resemblance’ between two people makes each of them equally responsible for the conduct of the other. This is no more intelligent than holding Charlie Chaplin responsible for the crimes of Adolf Hitler because they both had toothbrush moustaches. Or blaming Malcolm McDowell for the crimes of Slobodan Milosevic because they had similar hairstyles.

Yes, there is an ‘average’ of behaviour in any given country, and it will likely be different from the ‘average’ in any other country. But that is quite different from assuming everybody in that country is ‘exactly the same’, and that the crimes of one person of that nationality are therefore shared by all of them.

The great bulk of the refugees are not to blame for either set of attacks, and the overwhelming majority of them are not in Europe to cause trouble. They are just trying to keep themselves and their families alive. We in Europe only have a barest inkling of what they have been through, and the wish to see ourselves as ‘victims’, and the refugees as ‘invaders’, tells a story of selfishness and cowardice. Our own selfishness and cowardice.

To show support for the refugees arriving from the crises in the Middle East and beyond, you can; –