Corbyn just annihilated Cameron at PMQs, and it was beautiful to watch (TWEETS) - The Canary 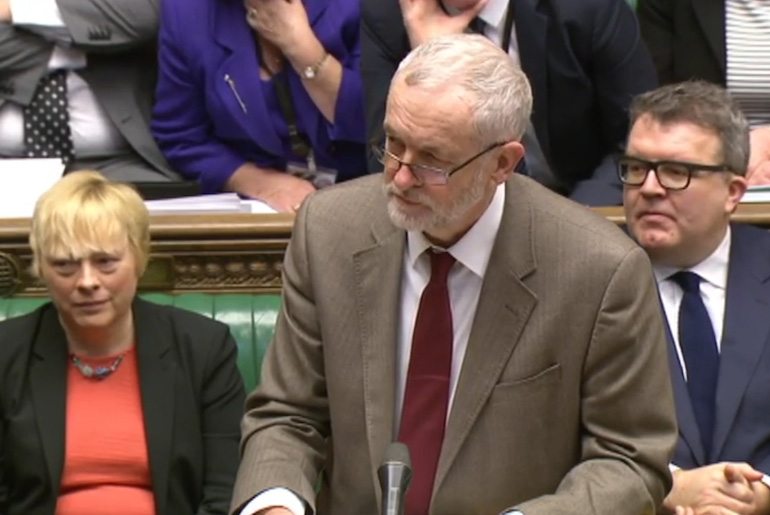 David Cameron just delivered his worst performance yet at Prime Minister’s Questions. When faced with a series of difficult questions about the NHS and the junior doctors’ strikes from Jeremy Corbyn, he launched into an extraordinary personal attack on the Labour leader.

Corbyn had asked the Prime Minister about overspending by Cameron’s local NHS Trust as a result of the high costs of agency staff. As Cameron began to answer, an unnamed MP shouted out “your mother” – a reference to the fact that Cameron’s own mother is fighting her son’s cuts in Oxfordshire.

This is what Cameron said next:

Ask my mother? Oh, I think I know what my mother would say. I think she’d look across the dispatch box and she’d say, ‘put on a proper suit, do up your tie and sing the National Anthem!’

While the nation’s elected representatives on the Tory benches descended into delighted hollers and jeers, Jeremy Corbyn calmly returned to the despatch box and nailed Cameron to the wall:

If we’re talking of motherly advice, my late mother would have said, ‘Stand up for the principle of a health service free at the point of use for everybody’. Because that’s what she dedicated her life to, as did many of her generation.

You can watch the full exchange here (from 9 minutes and 30 seconds):

Corbyn later followed up his response on Twitter with an equally cutting quote from Albert Einstein:

Twitter itself, of course, had plenty to say about the exchange:

The way Corbyn handles #PMQs is admirable – Doesn't tend to get involved in games or bully politics. Stays calm, respectful and composed.

David Cameron was immaculately dressed when he bombed Libya to the brink of destruction, i'll give him that. #PMQs

Even ‘David Cameron’s Mum’ joined in:

@David_Cameron. David, please ring me, I'm not happy about you putting words in my mouth! There's more to life than a nice suit! #PMQs

If it was David Cameron’s worst performance yet at PMQs, inadvertently revealing the Prime Minister’s pompous reverence for style over substance, it was also one of Corbyn’s best. All the trademark Corbyn elements were there: the headmaster’s stare, the appeal to principle and the refusal to descend to personal attacks and schoolboy ‘humour’.

More of this please, Jeremy.