As if austerity wasn't sick enough, it turns out it's causing us actual pain - Canary 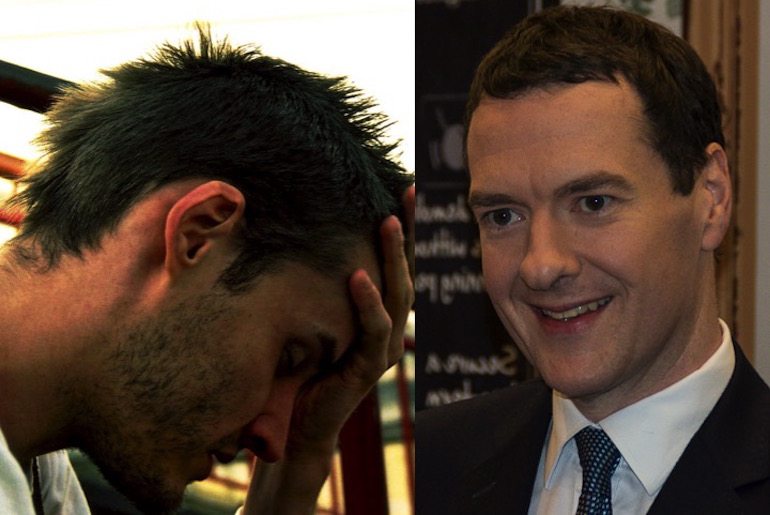 It’s not just painfully annoying that the Tories can’t be trusted with the economy; it might be causing us actual physical pain.

Scientists say our fear of economic instability and the lack of jobs is taking on the role of a predator, making us react biologically by feeling pain. And with the potential Brexit looming, bringing with it more fears of a crashing pound, this is unlikely to change in the near future.

Scientists from the University of Virginia in the US noticed that people were increasingly complaining of physical pain when there was economic turmoil, so they investigated to see if there’s a link. They did six experiments, including comparisons of consumer data, surveys and lab studies.

Their study, published in Psychological Science, suggests that people who think their financial outlook is unstable experience more physical pain than those who don’t. The scientists analysed data from a consumer panel of 33,720 people and found people in households where both adults were unemployed spent 20% more on painkillers than households in which at least one adult was working.

In an online study with 187 people, they found people reported feeling more pain if they were unemployed or if the state-level economy was insecure. And another online study showed people felt more physical pain when remembering a period of economic instability compared to one of stability. The scientists explain in their paper:

So what’s happening? The team believes it’s the lack of control we have over an unstable economy that gives us a physical response, similar to the way we used to respond to predators. The psychological responses linked to anxiety, fear and stress are controlled by similar mechanisms to those that cause pain. So, physically, it’s not surprising that fear of economic instability can cause physical pain.

The study provides some interesting insights for psychologists and doctors, but also for policymakers. The obvious answer, of course, is to make sure people don’t need to fear their economic situation. Cutting unemployment and helping people get themselves out of debt would be great steps to take. And perhaps in safer hands our shaky economy would stop causing us physical pain.