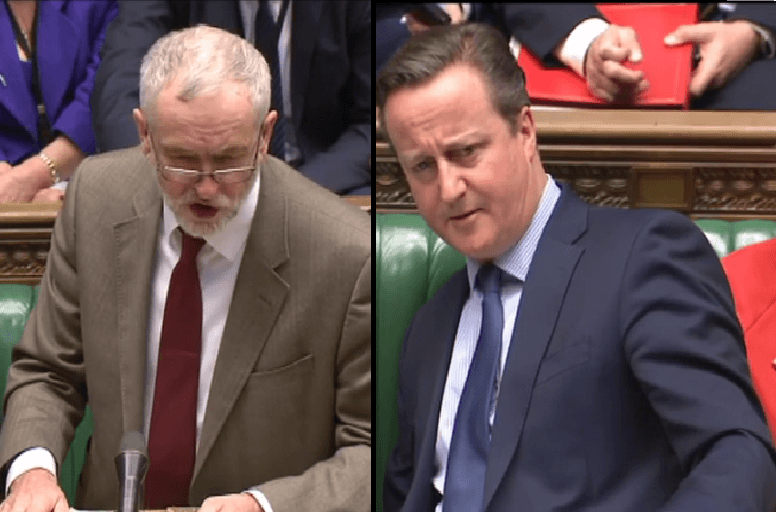 The establishment media just hit the panic button, after a resounding victory from Jeremy Corbyn at Prime Minister’s Questions (PMQs) on Wednesday. In their flagship PMQs articles, the BBC, the Guardian and the New Statesman lined up to remove the wider context in their coverage, in order to spin David Cameron’s schoolboy performance as a triumph.

All these outlets chose to focus on Cameron’s personal jibe at Corbyn, where he quipped:

I think I know what my mother would say. I think she would look across the despatch box and she would say ‘Put on a proper suit, do up your tie and sing the national anthem’.

Both the Guardian and the New Statesman claimed this cheap shot was divisive enough to grant Cameron an unequivocal victory. And the BBC, our public service broadcaster, failed to challenge Cameron on wasting taxpayers’ money and time by smearing the leader of the opposition’s dress sense.

These outlets sought to justify Cameron’s attack on Corbyn by citing Angela Eagle, who asked:

What would your mother say?

This is in reference to Cameron’s own mother signing a petition against his cruel cuts to children’s services in her area. While any personal quip should be avoided, the comment did perfectly summarise how deep the very real, non-personal issue of Tory austerity is cutting, with a heavy irony.

Cameron’s comment, meanwhile, was just about looks and singing a song about God and the Queen. Corbyn being both an atheist and a republican, it would be ridiculous to expect him to sing it, given this is supposed to be a free, democratic society where views are respected.

knocked Corbyn out of the ring with his glib

In a similar vein, the New Statesman’s political editor George Eaton thought Cameron “seized the opportunity” by retorting to Eagle’s quip while attacking what Corbyn was wearing. His article’s tagline reads:

A Labour MP’s careless heckle was a gift to the Prime Minister.

But Corbyn chose not to respond by attacking Cameron on a personal level, although there were truckloads of ammunition on that front: pig antics, his immense privilege, and the Bullingdon club, to name a few. Instead, Corbyn brought the conversation back to the matter at hand, that of the nation’s most prized public institution undergoing sweeping privatisation:

If we’re talking of motherly advice, my late mother would have said ‘stand up for the principle of a health service free at the point of use for everybody’.

Ignoring Cameron’s personal attack, Corbyn rhythmically used the principles of his own mother to bend the narrative away from cheap jibes and back towards the NHS.

But the truth is that Corbyn did not need to attack Cameron personally. Ironically, the Prime Minister’s own jibes saw to that. Cameron’s sartorial attacks on Corbyn betrayed his privilege all on their own. His priorities are superficial because that’s all he’s ever had to worry about. Huge cuts to public spending are a non-issue for him, while maintaining one’s outer gloss is of utmost importance.

All these outlets – the Guardian, the New Statesman and the BBC – overwhelmingly focused on Cameron’s retort towards the end, rather than the lies Cameron told throughout the exchange.

In response to a question on Jeremy Hunt’s contract imposition on junior doctors, Cameron said:

No junior doctors will receive a paycut.

This is not true. When he announced the imposition, Hunt said that he would lift the increase in doctors’ basic pay from an 11% to a 13.5% rise. But this is disingenuous. The junior doctors have insisted that the rise would amount to a real-terms pay cut of 26%, because of the change in salary for extra hours worked. And the junior doctors’ claims chime well with what we know about the Tories’ privatisation plans for our NHS, and the unsustainable funding levels being attributed to it. The Nuffield Trust thinktank found:

This is unsustainable, and suggests incompetence. But the Tories aren’t incompetent. They’re disingenuous. Their agenda is not about delivering on their latest buzz-word – ‘a 7-days-a-week’ service. This is just a pretext to press on with an unsafe contract. The real Conservative agenda for our NHS is another one entirely.

As I wrote previously: At the hands of the Tory leadership, we have a financially unsustainable institution, an imposed contract squeezing already overworked public servants, a book on NHS privatisation, and a relentless austerity agenda. There’s a desire to appease the rich multinationals dwelling in the polarised private sector, which bankroll the party. And there’s a personal interest for many MPs, who have links to private healthcare. As always, the wider picture extinguishes the Tories’ smoke and mirrors, leaving ‘Operation Privatise’ totally naked.

With this additional context, it is plain to see that the contract, and the severe lack of funding and new staff, are a gambit to privatise our public health service through crippling the NHS to the point where privatisation seems favourable. Indeed, public dissatisfaction levels are at an all-time low.

Then, the Tories will likely convert the money we currently spend on the NHS to heavily subsidise the new private healthcare services. This will create the illusion that the NHS is running better due to private sector control, when really it will be because we are being charged twice for our NHS service – once for the subsidy to the private sector and again when we foot the bill for our treatment.

This is what happened when our railways were privatised. Here are two of many examples: First Scotrail received a train subsidy of £525m in 2012, while Arriva Trains enjoyed a handout of £349m the same year. Yet we still pay the most on our rail fares in Europe, separate from these costs. You can see the extent of our corporate welfare bill on this database.

We’re not seeking to save money from the new contract.

Perhaps this is true. But he is trying to make money for the private sector. And the destructive contract is part of the profiteering privatisation plan.

These mainstream media outlets – the BBC, the New Statesman and the Guardian – all seem generally unabashed by what PMQs has descended into. In their first PMQs exchange, Cameron promised he would move above the usual relentless jeering. But after putting on a nice show for the novel episode, which had over double the usual amount of viewers, Cameron has descended week upon week.

The 500,000 viewers PMQs tends to get, according to the Independent, is dwarfed by the amount of views the BBC News at 10 gets, which stands at over 4 million. While this will be partially the result of public apathy, it is also because PMQs is on when people are at work. This leaves the framing of it up to the BBC, who have been known to turn BBC News at 10 into what feels like a party political broadcast for the Tories.

At PMQs each week, Tory jeers echo through the chambers nearly every time Jeremy Corbyn speaks. One can’t help but think this is because they are scared of people hearing what he has to say. Meanwhile, Cameron tends to resort to cheap jokes, in order to evade the questions, like here:

Well, I admit it wasn’t as thoroughly thought through as the honourable member’s reshuffle.

Either that, or he uses endless flawed logic, criticising the policies of Blair’s government, which ironically amounts to a criticism of his own Tory ideology. Corbyn staunchly opposed many of Blair’s policies from the backbenches, whereas the Tories backed every penny of New Labour spending, have continued Private Finance Initiatives and have sent British people out on another military misadventure in the Middle East.

Reporting on the latest PMQs, none of these outlets commented on a question Corbyn quoted from a doctor, who said:

As a doctor I know full well the stresses on the NHS and the shortcomings. We already have a 7-day emergency service. How does increasing elective work improve safety at the weekends? If a truly 7-day NHS is wanted, we need more nurses, admin staff, porters, radiographers, physios, all the other vital works.

Corbyn followed this question with one of his own:

Will the Prime Minister today commit to publication of the Department of Health’s analysis of the real costs of funding a 7-day NHS?

Cameron ultimately evaded the question, failing to say whether he would or would not commit to the publication. This lack of transparency is damning.

The establishment media are failing to hold Cameron to account for his blatant deception on the NHS, instead choosing to award him victory for playground personal attacks, which ultimately only betray his own boundless privilege. In not only failing to condemn lies, Tory jeers and personal attacks, but actually championing them, the establishment media are betraying their true colours.

The only place Cameron could be considered this week’s PMQs victor is down the local primary school. Yet the establishment media have swooped in to defend the indefensible: the government riding on a gravy train of taxpayer money in order to evade important life-or-death questions about austerity cuts, by launching personal assaults on the opposition.

Here’s the full video of PMQs on Wednesday:

–Support the Canary, so we can continue to be a viable alternative to the establishment media.