These are the 12 British cities really struggling, and Tory economics are to blame - Canary Workers’ Co-op 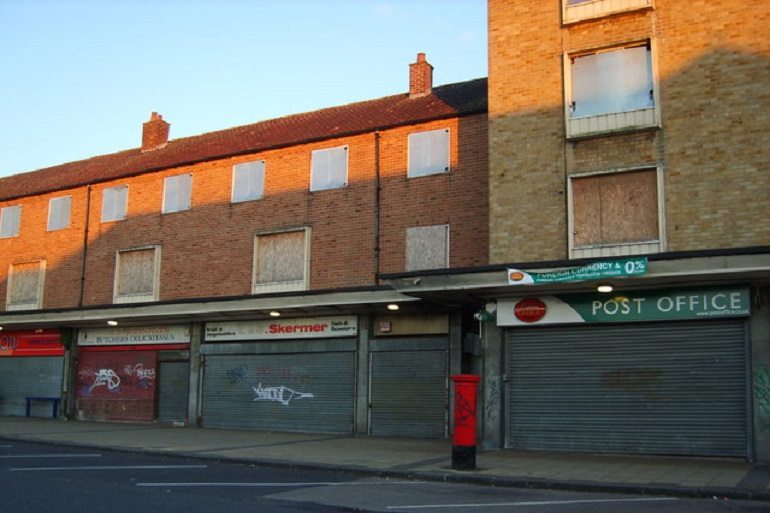 Why are some British cities in decline while others are thriving? And why are most of the struggling cities so close together geographically? As a new study reveals striking regional differences in the UK, the blame seems to fall firmly on Tory economics.

Josh Stott, Policy and Research Manager at the Joseph Rowntree Foundation (JRF), insists that “Britain has the potential to become a more prosperous country”, but that the government must take significant steps to “ensure areas outside of core cities are not left behind”.

Northern English cities are suffering the most

By “core cities”, Stott means cities like Liverpool, Manchester, Leeds, Sheffield and Newcastle – which have been targeted by the government’s Northern Powerhouse project. The majority of the UK’s most struggling cities are close to these big urban centres, and Liverpool and Sheffield are even in the top 24 themselves.

Meanwhile, 9 of the 12 most declining cities are either in Lancashire, Yorkshire or Greater Manchester – areas which once powered Britain’s Industrial Revolution. Rochdale, Burnley, Bolton and Blackburn top the list, with Hull and Grimsby completing the top six. Dundee, Middlesbrough, Bradford, Blackpool, Stoke-on-Trent and Wigan complete the top 12.

The reason why most of these declining cities are in northern England, the report claims, is that there have been:

As Aditya Chakrabortty points out at the Guardian, the UK’s manufacturing sector has been cut by two-thirds in the past 30 years – all in the interests of “economic modernisation”. This has been the “greatest de-industrialisation of any major nation”, he says, and has seen many British communities destroyed, especially in northern England. But the Conservatives seem to care very little about this.

David Cameron continues to follow the toxic economic ideology once pursued by Margaret Thatcher, and in some ways he’s gone even further than she did. Even New Labour capitulated to this school of thought while in power.

But the Iron Lady and her protégés were wrong. Cutting public spending, and industry, has not see the private sector solve the UK’s socio-economic problems. In fact, it’s made them even worse. Just look at how northern England dominates the list of cities in decline, while no southern urban centre appears in the bottom 24.

Regional inequality is not being addressed by the Tories

The creation of full-time jobs in the 12 most struggling cities fell by 2.1% in recent years, while the UK’s top 12 best-performing cities grew by 5.4%.

The Tories may claim that the Northern Powerhouse aims to change this situation, but they are continuing down the same economic path that led cities into decline in the first place. This is partly why the Manchester Evening News has called the project an “empty slogan” – a suggestion which was strengthened by the government’s recent decision to move Northern Powerhouse jobs from Sheffield to London.

As Centre for Local Economic Strategies CEO Neil McInroy said recently, the Northern Powerhouse has so far “delivered virtually nowt”, and it is unlikely to ever deliver. As long as the government continues to follow its current economic plan, which McInroy says is “spatially indiscriminate in its inequality“, there will be no meaningful solution for struggling communities – wherever they are in the UK.

Even the JRF’s Josh Stott insists that the Northern Powerhouse has been “founded on deals struck behind closed doors rather than a coherent strategy or delivery”. And apart from the introduction of “metro mayors” in cities like Manchester, he says, “there’s not really any delivery” on government promises to address regional inequalities.

Steps must be taken

Andy Pike, the Newcastle University professor who co-authored the JRF report, suggests there is currently little commitment to creating economic balance between different parts of the UK. Many cities in northern England, he says, are “failing to keep up with national trends”, and policy changes are urgently needed. He insists:

greater policy attention and resources by central and local government needs to be focused upon the particular needs of these cities lagging behind.

And if we listen to Neil McInroy, the big issue is not only to do with helping northern English communities. London, he says, has arguably the “greatest inequality of all”. To focus on applying the same bankrupt economic vision followed in London to cities elsewhere in the UK, he insists, simply “deflects” scrutiny away from the failures of that ideology. In other words, inequality must be addressed wherever it is in the country, and continuing with the economic status quo is not the way to do that.

The Tories’ secretive Northern Powerhouse deals – which will probably only benefit billionaire tax avoiders like John Whittaker – must be replaced with transparent decisions made democratically by local people. Some believe regional democracy and autonomy could help to remedy national inequalities. Sheffield University’s Craig Berry, meanwhile, argues that a real alternative would allow British regions to “pursue their own economic policy agendas”.

Whatever the solution, it is clear that regional inequality is not going away any time soon. And it is becoming increasingly evident that the Northern Powerhouse is nothing more than a distraction from the real cause of inequality – the government’s own bankrupt ideology.

-If you live in one of the struggling cities mentioned in this article, please get in contact with The Canary on Facebook or Twitter to tell us about the changes you’ve been experiencing in recent years.

-Learn more about direct democracy, a system aimed at empowering all citizens, here and here.