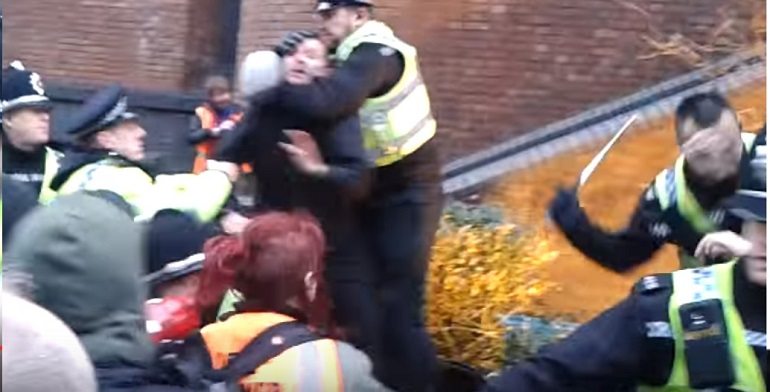 South Wales police reacted with violence towards protesters at an arms fair in Cardiff. Footage shows officers using batons, headlocks and horses against a handful of protesters.

According to eye witnesses, the first man to be detained dared “to raise his voice to a police officer”. Those watching were concerned about what was happening, and accused one of the officers involved of “picking a fight with anyone here”.

The situation quickly escalated due to violence on the part of the police. The second person arrested on the video is clearly not posing any threat but is attempting to witness the first arrest. He is put into a headlock and dragged to the floor. Meanwhile, a woman who is trying to observe what is happening to him is beaten with a baton.

A witness to the attack, Clare Segar, said:

The South Wales police acted shamefully during the Stop Cardiff Arms Fair protests. At one point police officers had a protester in a headlock as one officer repeatedly struck him across the face with a baton. The man was fully restrained by officers and this was an unprovoked and shocking attack.

Protesters had gathered at the Motorpoint Arena in Cardiff to oppose the arms fair. Actions included a rooftop occupation, free food, creative protests and live music. The six arrests included the two people on the roof.

It is not the first time South Wales police have reacted with disproportionate force towards protesters. In fact, the police officer who has his baton out on the arms fair protest is the same officer seen attacking protesters in this footage at a Cardiff Uncut protest last year.

The two protesters arrested at Cardiff Uncut were eventually acquitted of violent disorder and actual bodily harm after the footage was played to the jury. Despite the acquittal, and the two men taking civil action against the police, these officers are still being allowed to police protests, and act in this way.

The Network for Police Monitoring (Netpol) have been monitoring police violence during the policing of protest in South Wales. One of their members, Val Swain stated:

South Wales Police have a very poor track record of reacting proportionately to protest events – at best this is ineptitude, at worst it is vindictive.  In either case, there has been a consistent failure by senior officers in the force to recognise the need to facilitate protest, or to address aggressive, violent or malicious behaviour on the part of their officers.

Netpol have tracked a series of serious failings of South Wales Police in their policing of protest since 2010, and are aware of other worrying allegations in relation to the policing of protest prior to that date.  There appears to be a culture within this police force that is highly resistant to the idea of accommodating protest.  We are extremely concerned that these failings are still not being addressed.

There can be no justification for any police violence, but particularly the level of violence seen on these videos. There is no reason for treating protesters in this way, and senior officers need to urgently examine how their officers are behaving.

Get involved:
-Show solidarity and join the undercover is no excuse for abuse protest outside Cardiff Central police station on 24th March.
-Join Netpol’s announcement list to stay up-to-date with the latest information and campaigns.
-Support Campaign Against Arms Trade and Stop the Arms Fair and get involved in future actions against the arms trade.