When the Chancellor visits a school or factory, we normally only see short sections of a speech, or muted images behind the head of a familiar newsreader. But here’s what George Osborne’s visit to a school this week feels like with the sound on. Awkward doesn’t even even come close.

The Chancellor was clearly not in his comfort zone during a visit to St Benedict’s Catholic Primary School in Garforth, West Yorkshire this week.

The footage, posted by Channel 5 News, includes subtitles to pick up on Osborne’s mumbled efforts at conversation with several groups of clearly unamused children. At one point he resorts to simply listing the breakfast cereals he can see infront of him in an effort to fill the ever more awkward silences.

Moments before, he is seen (in footage which has since gone viral) trying and failing to play netball with another group of children. A game which begins to look more like piggy in the middle.

Social media users have been having a field day in the comments section. 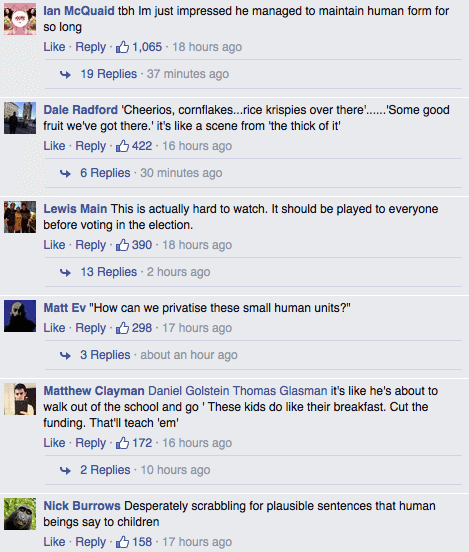 It hasn’t been a great week for the Chancellor. But, however brutal Osborne may attempt to appear when wielding his axe of austerity – it’s refreshing to know he can still be cut down to size by a bunch of primary school kids.