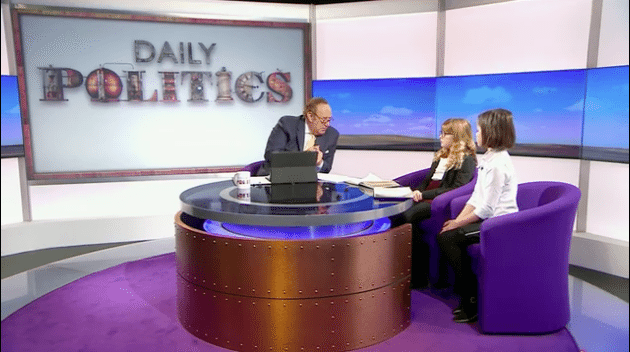 The BBC’s Daily Politics invited some young people onto the show as part of their education in the world of politics, but it was host Andrew Neil who got schooled when a 10 year old girl punched a hole in his pro-Conservative arguments live on air.

The girls were on as part of a CBBC special, to be interviewed on government policy and a range of political issues by host Andrew Neil. But things went a little off-script during the live show. Neil made a clumsy attempt to have the children undermine the idea of state intervention on matters such as the sugar tax, or welfare, or health and safety legislation with a leading question – but they were having none of it.

Charlotte, from the Wirral, and Henrietta, from Worcester, made a case well beyond their years which is well worth viewing. Charlotte shoots back at Neil with:

“Mr Neil, do you remember on January 31st 1983, when seatbelts were made compulsory. It wasn’t a popular idea, people didn’t like it, but do you know how many lives it saved a year?”

Neil’s quite snippy response is:

“I think you’re going to tell me.”

Charlotte gives Neil a look that would freeze most hearts, before replying:

“300 per year, because the government did something.”

When asked for her opinion, Henrietta agrees.

“If it’s saving lives and it’s helping the NHS then I think it’s good, we should be told what to do.”

Attempting to save something from the exchange, a perplexed but admirably amused Neil tries one last move on the girls.

“When I was your age and someone told me not to do something, that usually meant I tried to do it,” he lectures.

But Charlotte doesn’t skip a beat before catching the host off guard with a stunning reply. Looking him straight in the eye, she says:

“Maybe you weren’t educated properly enough about health and wellbeing”.

Ouch. A humbled Neil just about managed to grab the last word with:

“Many people have said that…”

It is one of those perfect moments of television which will no doubt follow Mr Neil for the rest of his career, a little like the image of a 16-year-old William Hague berating the 1977 Conservative Party conference. Let’s hope Charlotte sticks as firmly to her emerging principles as Mr Hague did to his.