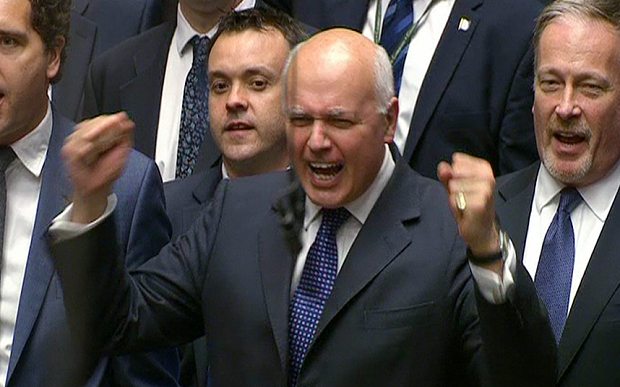 People have been reacting to Iain Duncan Smith’s resignation. We’ve collected some of the most hysterical for you to enjoy.

Some questioned his motivations:

Iain Duncan Smith resigned because the Treasury would not fund a machine he invented that tipped disabled people out of their wheelchairs.

NEWS! Iain Duncan Smith resigns over restrictions on how many disabled people he can abuse https://t.co/F6DwKWW0l3 pic.twitter.com/T9c69lk6NY

Others worried about whether he’ll be sanctioned:

Iain Duncan Smith has quit his job voluntarily. It's a first offence so his sanctions will lead to a loss of benefits for a month.

Whilst others started to advertise for his replacement:

Meanwhile, Tory MPs have started to express their indignation. Defence Secretary, Michael Fallon was the first cabinet minister to break the silence. Speaking on the Today programme, he lambasted IDS, claiming the cuts were “his proposals”. He further stated:

The entire cabinet endorsed the budget including Iain Duncan Smith on Wednesday morning before it was presented to Parliament.

Fallon expressed further puzzlement at the decision, given it had already been announced that the proposed cut to Personal Independence Payments (PIP) was on hold pending review.

Stunned at IDS resignation letter. I was about to vote against ESA cuts when he sought me out – he personally and angrily begged me not to.

I am angry that he made me vote for something I did not want to vote for, bribing me with a promise and now HE resigns

Furthermore, even David Cameron appears to be in shock at IDS’s decision, managing to muster only a “puzzled and disappointed” comment in response.

This has been a desperately bad week for the Tories, and it is hilarious watching them start to bicker among themselves. Even without the shock resignation, we have already seen a government forced into a u-turn over disability cuts, yet another defeat in the Lords on the trade union bill, and a chancellor who is utterly incapable of defending his own budget. At the same time, recent polls have put Corbyn in the lead, while divisions over Brexit and leadership machinations set to dominate the Conservative party for months.

It has been easy to feel desperate and hopeless as the tories have pushed through one horrendously atrocious piece of legislation after another. At times, it has felt like we’re being bombarded with too much to fight. However, the events of the last week have shown it is possible that we can win, and things can change.

More than ever now is the time to increase the opposition, to increase the agitation, and show this government is no longer in charge. Whether it is supporting junior doctors, opposing the housing bill, cuts to benefits or the erosion of our rights, we need to be on the streets, being ungovernable, and proving that this government does not have the mandate to continue.

Find a local group and get involved in your area.