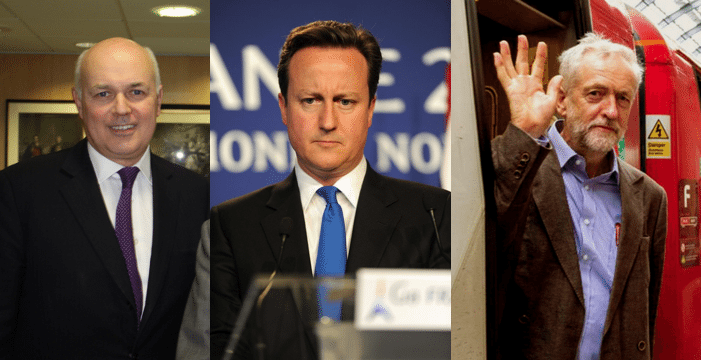 The real reasons behind the resignation of Secretary of State for Work and Pensions (DWP) Iain Duncan Smith have detonated a landmine in UK politics. We may be witnessing the end of austerity, and the beginning of a political coup by Boris Johnson and the Brexit wing of the Conservative party.

Iain Duncan Smith, the most reviled Secretary of State for Work and Pensions in living memory, dropped a bombshell resignation on Friday. He left with these words:

“I am unable to watch passively whilst certain policies are enacted in order to meet the fiscal self-imposed restraints that I believe are more and more perceived as distinctly political rather than in the national economic interest,”

Whether IDS had a sudden or prolonged attack of the conscience is an interesting question, but ultimately a moot point. Whatever his rationale, one of the chief advocates of austerity has just denounced it, publicly. The fact that IDS is seen as so core to the austerity cuts of the last six years makes this resignation a sucker punch that has temporarily floored the Conservative leadership.

David Cameron says in his acceptance letter to IDs that he is “puzzled and disappointed” that IDS chose this moment to resign.

So he should be, because the deeper reasons behind this resignation signal that David Cameron’s problems are about to get far worse, rather than better.

We may be witnessing the beginning of a political coup by Boris Johnson and the Brexit wing of the Conservative party. As Paul Mason explains on Medium this morning:

The background is the vicious Tory infighting over Europe. Given the Cameron faction is using the whole bag of dirty tricks against the Johnson/Duncan Smith faction over Brexit, IDS has clearly had enough. There will now be a strong challenge to Cameron after 23 June, whether Britain votes to stay or leave.

The coup is not only out to topple Mr Cameron, but Mr Osborne with him.

But moving beyond the Westminster squabble – the benefit to Britain is that this has all but killed Osborne’s budget. While the party fractures, the austerity project can be halted.

As just one example among many retractions this week, was the appearance of Education Secretary Nicky Morgan on Questiontime on Thursday. When asked about the £4.4bn cuts to disability support that Osborne announced in his budget speech on Wednesday, Morgan rebranded them as merely “suggestions”. This signals a potential u-turn that would grant enormous relief to the 300,000 disabled people that would be hit should the cuts go ahead.

While this is bad news for Cameron and pro-Austerity Conservatives, it is even worse news for Blairites in the Labour party. Not only does it mean that Jeremy Corbyn’s anti-austerity, pro-investment platform has been right morally, and economically – it means he has been right tactically.

Like the Scottish National Party in Scotland, and Plaid Cymru in Wales, the Corbyn-McDonnell partnership has presented the electorate with a genuine choice, and been unflappable in the face of everything a unitedly hostile press has thrown at them. They can rightly interpret this move by IDS as public recognition that if the Conservatives go into the 2020 election as a pro-Austerity party, they will lose.

The departure of Iain Duncan Smith on Friday has turned several long-running cold wars in UK politics red hot. The real reasons behind his departure explain why 2016 might serve to be one of the most dramatic, high stakes years the UK politics has seen in decades. Not only could we be witnessing the end of austerity, but the end of the Conservative government.